Being friends with Jesse Mowery has many benefits, but the one I'm focusing on today has been my general inclusion with all MAJOREL recordings. This Richmond, Virginia supergroup has members of so many notable bands that it's silly, but the big three I'd drop are .gif from god, Altar Of Complaints and Caust, although bands like Yusuke, Gas Up Yr Hearse! and Swan of Tuonela are definitely notable, too. They play an incredible hybrid of punk, screamo, post-hardcore and soaring rock riffs, perhaps bearing a slight resemblance to screamo geniuses Edhochuli in their ability to juxtapose chaos and screaming with extremely tight musicianship and some unforgettable riffs. MAJOREL tends to take their music in more extremes and focus more on stacking different layers of sound, creating a lush, driving and powerful entity. Oh, and they also utilize four vocalists! 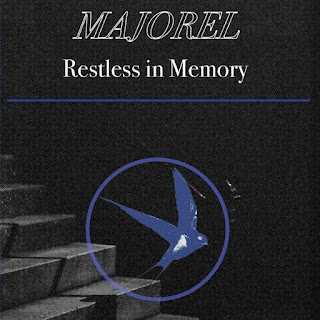 In 2017 Jesse starting sending me practice demos and soon after the unmastered songs to which I, simply put, lost my mind. Once I heard the masters I got that thing to the plant asap and printed 70 copies on lavender tapes with a 2-sided j-card, which turned out pretty sweet, I think. We are down to about 15 copies now (pick one up here). This was in my top 5 EPs of 2017 (linked here) and I still jam it regularly because it's one of the best debut EPs I've heard in quite some time. The absolutely stellar opener "A Simple Retreat" starts things off with a very effective back and forth from the guitars, followed by Jesse's screaming and then the song explodes forward, only to retreat back after 20 seconds and dip deeply into an eerie, middle-eastern sounding riff that works like a magic lamp, intoxicating the listener. The multiple screamers adds a few more layers to the cake and, as always, drummer Will's throat-wrenching shrieks tear through to the forefront. "Unversed, a Conscious Abandonment of Surroundings" is a much more aggressive song and is only 1:19 in length, making it the shortest MAJOREL song to date. The drums in this are raging, and the chugs at around 35 seconds lead into an insane section with a plethora of vocals and an epic close during its final 10 seconds. "Attempting Coherence in Form and Intent" is the first song to begin chill, but the swelling guitars eventually break and cascade over by 27 seconds, giving it a heaving, unstable and Marat-esque opening before delving back into that lush, playful and very engaging MAJOREL sound. The climax comes at 1:39 with everyone taking turns screaming over some ridiculous riffing. "Until the Well Runs Dry" is definitely the most somber of all the band's songs, and plays like an epic post-hardcore with slight screamo influences, instead of the other way around. The second half is more charged than the first half, but if you're looking for subdued screamo done in the best possible way, look no further. Closer and downright mindfuck "Disrupting Moonwake" is a very different beast. There's something about it that is like an alternate consciousness or personality, as it spends over a minute weaving a beautiful screamo tapestry before raising the roof at 1:20 with a powerful transition that pushes the band to its limit as the final 30 seconds is a huge, gutting breakdown with gutteral growls. Jesus H. Christ that's some amazing stuff, my friends. (the "H." is for "Holy Fucking Shit")

Later in 2017 MAJOREL was included on a six-band comp put out by the amazing people at Akashita Corp. and their contribution is an exclusive track by the name of "Ivory Tower". It is 2:27 in length and opens with a riff that I could sway to for days, complete with trade-off screams and an ambient, post-rock transition to driving midsection. That last, devastating minute when the guitars come in with some mind boggling chord progressions, stops and starts and swirling vocals that are the mark of a truly great band.

In 2018 I was asked to partake in a split 10" by Shawn of Middle Man Records, and they told me that the newly added fourth band was going to sway my vote as to whether to help release it or not. Truth be told I was already very interested as I'd heard good things about Cady, loved Agak and have reveled in Coma Regalia for over half of a decade, but when the name MAJOREL was added I started salivating, got light-headed, needed new underwear and after hearing their phenomenal contributions, I was so blown away that I think I saw my future. Opener and penultimate MAJOREL track is "Negation", which we premiered a few months back in April right here. This thing is my song of the year. Last year it was Trachimbrod's "Tärd", and this year it's this. It's so fucking this. The opening is amazing and all, but Jesse's search for the perfect riff may have ended with the stunning carousel rhythm/solo that boldly leads the song forward into screamo history from 1:03 onward, and holy shit I'm fucking crying over here this is so unbelievably fantastical. The intertwined vocals and cyclical movement of this section are, in my opinion, unparalleled in the screamo genre, with noted influences Via Fondo and Trachimbrod coming close behind. The best, Jerry. The best. "Surrounded By Heartbeats" is next, jumping from amazing part to amazing part in seamless fashion, using its final third of the song to calm the listener down after so much goodness. The final banger here is "Behind Glass" and is the shortest of the three. It begins with a huge instrumental opening that swings around four times before switching to a much more optimistic sound. It then begins to ascend and levels out with a vast, spacey-yet-piercing feel to it, giving me all the right feels.

So there you have it. I fucking love MAJOREL. Whatever their next output is, it's already a contender for best thing I'll hear all year.

(2018) MAJOREL - "Surrounded By Heartbeats" (from 'Desolate Hands Move the Hour')

(2017) MAJOREL - "Ivory Tower" (from 'Innovations In Sound and Communication')

(2017) MAJOREL - "Unversed, a Conscious Abandonment of Surroundings" (from 'Restless in Memory')