I remember when I first heard about SLEEPER WAVE. It was through my friend Greg from People's Temple Project, who was basically gushing all over the new band (at that time), telling me it's kind of jazzy screamo along the lines of Off Minor. Let's be real here, finding a more than capable jazzy screamo band is really fucking hard. You've got your Off Minor, your Massa Nera, good ole Mustaphmond and the final album from Mouse Fitzgerald. So that is one of the things that make this band so special - they danced that screamy/jazzy hardcore line with ease, and their final three EPs/splits are sensational, to say the least.

I guess I have to start at the beginning. So, simply put, the 'Demo' is not that good - at least if the later SLEEPER WAVE sound is what you're looking for. This is unpolished, slow and much more simplistic than everything that followed. There are glimmers of what was to come, such as parts of "Jeremy's Dream", "Resemlance" as well as the instrumental midsection and ending of "Distance (ii)".

It was with the band's self titled 'Sleeper Wave' cassette that showed the band hitting their stride for the first time, but do so in immaculate fashion. "Mycorrhizae" opens and shows instant, staggering improvements. The dual vocals and stop/start, jarring rhythms are a staple in the band's sound, but it's those fantastically jazzy sections like most of "Fatal Summer" that make me swoon. "Eluviation" is a killer jam, boasting a swirling guitar progression that'll have you screamin' and dancin' in no time. And then there's the closer, "Abandonment", perhaps the ultimate SLEEPER WAVE tune. It opens with a absolutely sensational instrumental jam that rolls into dreamy, spacey twinkles amidst the jazz, giving the guitars some Via Fondo flavor. Once the vocals hit at the one-minute mark and then the band shifts to what I refer to as the "Sin City" riff I am fucking spent. Honestly this is one of the best screamo songs I've ever heard, so if you want a starting point for the band it's right fucking here.

In 2016 they released a split cassette with People's Temple Project in anticipation of their split 12", titled 'split/demo/tour' which housed "Drowning". I was lucky enough to premiere this song in a post (linked here) which is one of their chillest songs but hits classic, playful and catchy SLEEPER WAVE come 1:30.

So there's a bit of a story behind their involvement in the 'Eight Feet Under' 2x12" series. This thing began with two Canadian bands (Nous Etions and Congratulations) and after acquiring some Swedish gold (Via Fondo and Vi Som Alskade Varandra Sa Mycket) I looked to the U.S.A. for the third side. I asked my friends in Youth Novel and Ice Hockey, who both agreed. But, a few months later, Ice Hockey broke up before writing/recording their contributions. I asked around and eventually decided to settle on SLEEPER WAVE. I loved the band and all, but I wasn't expecting all that much. They were the first band to submit their finished songs and, being as honest as possible here, I lost my marbles. What the fuck?!?! These four songs were and still are incredible. They pretty much took the cake for best songs on the entire 8-band split. A serious hats off to you three. Before sending me the songs they had let me know that they were "getting heavier" and they were definitely correct. Opener "Endless Elegies" and "Glacial" could both have ended up on the self titled and been some of the best tracks, but "Counter-friction" and "Welcome to My Life, This is Me" are on another level. "Counter-friction" is very dark and bass-heavy during the opening, and then at 40 seconds there's a transition through a wicked guitar build that are met with phenomenal drumming from the 53-second mark. At 1:20 the band drops a prodigious breakdown complete with dual shrieking and a noodly guitar throughout. And that last 30 seconds...holy shit, just devastating. "Welcome to My Life, This is Me" is much shorter but delivers the knockout blow in just 1:44. After palm mutes and feedback the back-and-forth screams spew outward with more insanely tight drumming that leads to a typical/mindblowing SLEEPER WAVE eerie/Sin City section 30 seconds in which detonates 20 seconds later. I still have these 2x12"s in stock in both Zegema Beach Records stores so feel free to pick one up here.

Also in 2017, they contributed an excellent cover of "A Present For Those Who Are Present" that one may successfully argue sounds more like Jeromes Dream than SLEEPER WAVE. Wanna pick up that tape? Nab one here.

In 2019 the final SLEEPER WAVE release was unleashed, and I was lucky enough to take part in it. Their split with People's Temple Project will undoubtedly be one of the top splits of the year as both bands crush it. In addition to being amazing, these final three songs are the band's heaviest material. Opener "Shelf Life" is has the melody and positive, playful sound found back on their stellar 2015 self title. "Coward" is next and was premiered first on the Zampler #12 compilation, primarily because it's my favourite of the three and up there as one of the band's best. The jazzy introduction is perfection and when the vocals chime in to help bring the intro to edge of the cliff I get fucking chills. the eventual fall happens at 49 seconds and then so many amazing things happen afterward that I'm not even gonna try. Closer, and without a doubt the angriest, most violent and cavernous song SLEEPER WAVE ever released, "Apathy Through the Aperture" is a more than fitting swan song. Those vocals at 0:52 are straight-up death, and the subsequent freak-out is tantalizing.

In honor of this very special band, I've posted a VINYL SPECIAL in the Canada/International Zegema Beach Records stores. You can get the SLEEPER WAVE split with People's Temple Project as well as the Eight Feet Under Vol.1 2x12". That's three 12"s for only $25CAD or $23US. Grab one from the Canada/International store here or the U.S.A. shop right heeya. 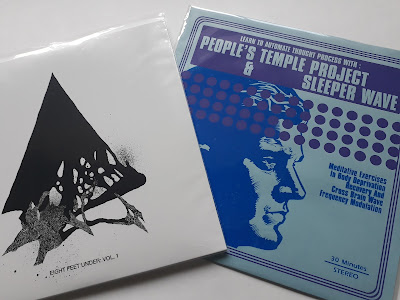