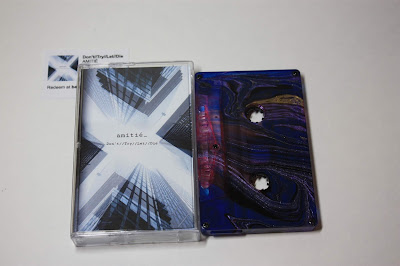 AMITIÉ began as TALL SHIPS SET SAIL but changed their name and (for the most part) their sound in 2018. The poppy emo was replaced with much stronger, heavier and more dynamic screamo, and I couldn't more on board with it. Despite being a pretty new band, their unique sound is very distinguishable and difficult to pigeonhole, although comparisons to D'Amore and Sweetheart are probably the best thing I've come up with.

They first released a track called "Overtoun Mink" that eventually became part of the digital 4-way 12" (but not the physical...sad dog) and it's fucking awesome. I'm a picky son of a bitch with clean vocals, but the crooning on this song is by far its best feature. The other two songs from (I would assume) the same session were released on the Chivalá, Lytic and Piqué split 12" that I helped put out. Opener "The First 21 Years" is straight-up emo and very reminiscent of Tall Ships, but the next one "Perpetual Motion" is much more in Dave-style. This sucker is over four minutes in length, taking the listener through many alleyways and back doors. Things get pretty heavy come 30 seconds, but it's the transition just after 50 seconds that is truly staggering, despite the lack of chugs. There's excellent dual screaming amidst twinkly, driving instrumentals that eventually culminate in an excellent mixture of emo and hardcore.

Just a few months later the band really took things up a notch and released a truly most excellent LP by the title of 'Don't​/​/​Try​/​/​Let​/​/​Die'. "What I Did Wrong" opens with strained, spoken word and calm post-hardcore that gradually becomes more and more volatile until it finally leaps into emo-violence territory come 1:34. "Subtract Capacity" is the first certified fire hazard on this album, as it swells for the first 40 seconds before utilizing a fantastic speed up at 45 and 52 seconds, giving me goosies every time. The best track has to be "Mother of Mothers", as any fan of German screamo/emo-violence will likely get a fucking kick out of the introductory guitar tone as well as the bass, which sounds like the most graceful plummet down a cliffside that I've ever heard. Just before the first minute ends the song shifts into another beautiful sounding screamo build that layers a second guitar at around 1:30 and goes supernova at 1:46. "Nightshade" is another quintessential AMITIÉ tune that is a mishmash of European Italian screamo, bassy noise rock and some excellent dual vocals. Another track of note is "Tilted Houses", which rides a massive, rolling wave that crashes come 1:25 on the shore to reveal luscious treasures. The only thing I think this release suffers from is slight inconsistency, as half the tracks are sweet and the other half are incredible, making it an excellent full length, but had it been a five songs I'd be touting this in the top 5 EPs of 2019. Tomb Tree Tapes just released a second run of 50 cassettes, 20 on swirl, 25 on silver and 5 on very special swirl w/gold injection.

As the band continued to mature, they made a very cool decision to spearhead an incredible 5" split series that they are in the midst of at the time of this review. Thus far they have released the first three lathes alongside Pique, Karloff and Piet Onthel with (I think) two more to come. The 'Pique split' houses "Today's Agenda Is...", a 47-second romp of explosive, metallic hardcore with strong emo-violence tendencies. No noodles or atmospheric sections here, just fire. I had the pleasure of helping release the 'Karloff split' 5" lathe, and that contribution is easily one of my absolute favourite AMITIÉ jams. Matt's bass starts this one off alongside driving drums and spacey guitars, but at 37 seconds the song quadruples in speed. At around 50 seconds I think I'm listening to For Your Health or Binary, and during the epic conclusion there's more metalcore than anything going on. Hot damn! Just last month they dropped their 'Piet Onthel split' 5" where you can find the song "Hyperaggressive". It's brooding, immersive intro explodes after almost 50 seconds with some ridiculous drums, only to give way to a jazzy section before the climax.

I am aware of a sick upcoming 3-way 7" lathe due to my involvement with Zegema Beach Records, as we will be helping release it with some other stellar labels. The only thing I will say about it is "Scam Likely" is one of the two AMITIÉ tracks, and the entire split is fucking awesome.