THE SHORT BLOOMING were another band whose name encapsulates their existence to a t. This particular band were around for less than two years in Essen Germany from 2006 until 2007, releasing but a single cdrLP titled 'Zu wahr um schön zu sein'. Sure, they had a few other physicals but the initial LP houses all of their released material. They played a darkened, dual-screaming and spectrum-jumping screamo that could definitely be likened to bands such as Killed By Malaise, Dispensing Of False Halos and Battle Of Wolf 359, with a touch of early Saetia sprinkled on top. 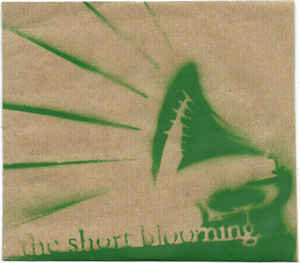 Their LP contains 8 fantastic jams, beginning with the awesome "Abendkasse" and its stop/start chaos with a few very memorable isolated guitars notes and a plethora of back and forth screaming between the primary vocalist and drummer. Gianna's vocals are very shrieky and at the forefront while her poisonous delivery is accentuated by Daniel's call and response. "Von Fingerabdrücken, Schneeflocken und so" follows and has an awesome Welcome The Plague Year-esque, dreamy, atmospheric section led by earthy bass and perfect guitars that begins at 40 seconds and builds with the screaming to a climax before briefly revisiting that sick shit. The band then shifts gears and delivers a lulling, short, instrumental, self-titled track titled, obviously enough, "The Short Blooming" before busting out more acidic hardcore with "Wishful Thinking" and the most toxic and jarring of all their recorded vocals. At the halfway point the LP likely reverts to the '2006 Demo' songs, as their recording quality is a bit more muddy and the songs, although great, aren't of the caliber of the opening four. "Kostenfrage", "Repetition Kills Peculiarity" and "Gefangen are all decent but "Nex one, please!" is my favourite of the initial recordings as its driving swings always get my head bobbing.

It's a shame there isn't more information and live videos of this pretty obscure but much loved German band. Discography download below, enjoy!

2007 - Zarathustra Has Been Killed In The 70's, Spectres & Vlado Petrik split (two songs from the LP)