I had been following the Malaysian hardcore/screamo group TONE FAILED TO DESTRUCT sometime in 2020 after hearing their digital single demo for "lullaby remedy for toothache" and being struck by the abrasive, jarring, and shrieky began talking to guitarist Chupi. 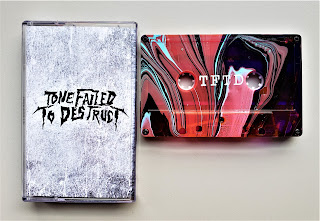 Almost a year went by and Chupi and Arwith from Utarid/Utarid Tapes sent me the new EP and I was floored. So I made tapes for Tomb Tree back in Nov/Dec 2021 and a few days back it was co-released on the two labels. The frantic and sarcastic nature of the album can be summarized by isolating the audio samples/instrumental interpretations which include a bunch of lullabies, kids' songs, infomercial clips, and more, although one could argue that trimming any section of the actual songs would do nicely. 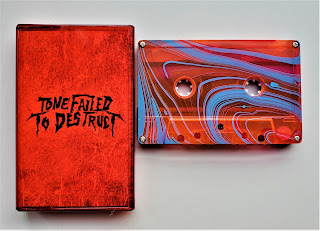 1 "Lullaby Remedy For Toothache" - The reworked demo sounds gnarly and comes in crashing post-"Charlie, that really hurt!" and instrumental "nah nah nah nah nah" tease. It's an off-kilter slap in the face that dips in and out of rapid sections that has a strong metallic edge to it, making it perhaps more on the grindy metallic hardcore side than screamo.

2 "Varial Velocities" - The beginning sounds like a messed up drug trip with swirling/confusing instrumentals that nicely leads to an emo-violence explosion just 30 seconds in. Directly after is another instrumental interpretation, this time of "This Old Man" before moving into a very Hayworth-esque jazz interlude. The climax of the songs follows and is a massive breakdown that abruptly ends and Mohammed Ali jumps in to tell you how great he is.

3 "Pinnochio Worthless Words" - The middle of the EP begins with a Malaysian infomercial about dvds (lol) before ripping into the listener with the crustiest crack of the collection, and includes some cool guitar work by my man Chupi before the song goes into ludicrous speed whilst still wonking out (some Ed Gein vibes, perhaps) before another jazzy interlude gives you something to relax to. Relaxed? Good, cuz the final leg is more righteous noise before the Pinnochio sample outro with an interesting quote, "A boy who won't be good, might just as well be made of wood."

4 "Astakonah" - Utilizing a strange dvd audio sample, the band uses the confusing/quirky intro to distract the listener before followed laying waste to the speakers. Good lord that shriek is uncanny, and the mathy Hayworth part is followed by a behemoth of a breakdown. Definitely a stand-out tune.

5 "Not Your Typical HC Punk Band" - The closer sounds more like a party song than anything else, and I bet is a hoot live. 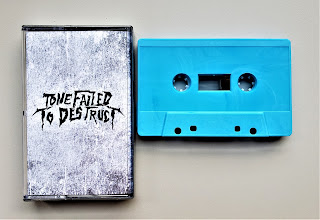 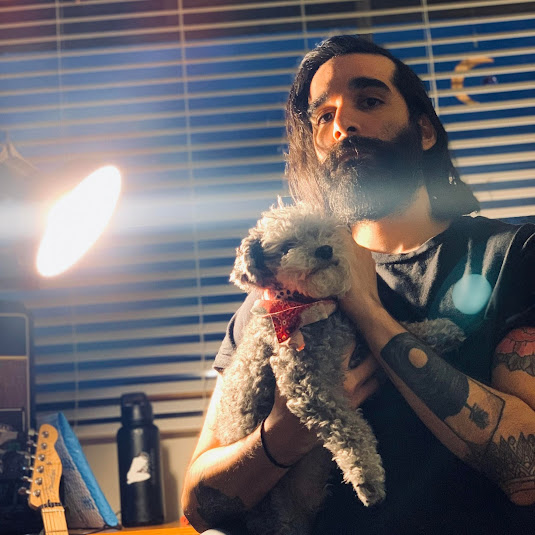 2013. Damn, almost 10 years ago started this blog. Extremely early on I met Sammy Gurule. Sammy had recently released his 'Untitled' WARREN OF OHMS album and I jammed the hell out of it and did a little post about it. Well now we're a few albums later and the two of us have been building an online relationship (sexy, I know) that has culminated in at least three things. The first being the most obvious, this podcast, which I was hella stoked on and it was tons of fun (as expected). The second is a run of Zegema Beach hats, shirts and patch courtesy of Sammy Gurule's art. Lastly, the upcoming Apostles Of Eris split with Encarsia has Sammy contributing vocals on all three AOE songs.

Things discussed in this podcast: American Idol, a lot about Clay Aiken, Sum 41, learning how to scream, the first band...Your Kingdom Falls, Nausicaa of the Valley of the Wind, changing covers (to get with the times), vocal issues, the album he can't listen to, putting out something that properly represents you, Not Just A Phase compilation cassette, what's happening next for Warren Of Ohms, best albums of 2021 and 2022, the upcoming Apostles Of Eris material and the Sammy effect, etc. Bands played in this podcast: Amia Venera Landscape, The Armed, Clay Aiken, R. Josef, and Strawberry Girls. Listen to podcast #83 which is available to stream and/or download for free via this link. 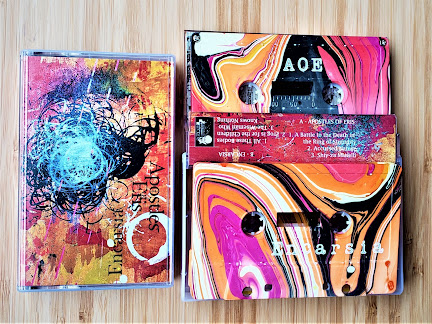 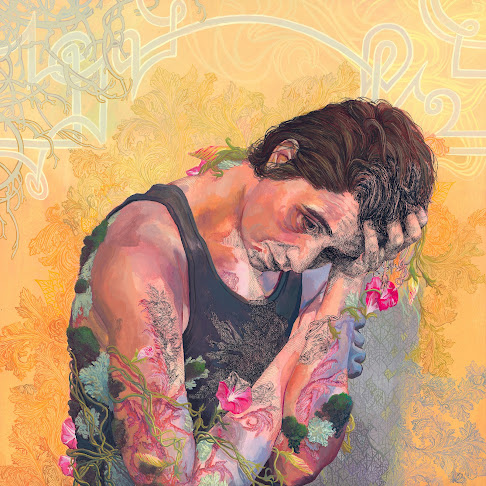 For fans of: Big Water, Blue Youth and Life In Vacuum
Bandcamp
Facebook
ABANDONCY have been kicking it pretty hard the last few years, with a split 7" and ful length, they are already set to unveil a new album on February 25th. Featuring seven kick-ass jams 'Pastel//Anguish' also has some great art by Caroline Harrison (who has worked with Yautja, Sunn O, Portrayal of Guilt, Ken Mode). The band also has a show coming up on February 25th which I've included the show poster for below, and you can check out while jamming this brand new track! Nab a tape pre-order from the Abandoncy Bandcamp page!
(2022) ABANDONCY "Cactus Flower" (from 'Pastel//Anguish')
This eerie, almost western-sounding intro quickly bleeds into haunting Meth territory before hitting the first big groove just before the 50-second mark. The subsequent section mixes Life In Vacuum instrumental quirkiness with gruff/yelled vocals not unlike Canyons, with a repetitive descent into a cavern that loses more and more light until 2:30 when the song explodes with massive bass, some slightly higher yells/screams and one helluva groove. The song then uses latches on to a basic loop and injects tons of feedback before concluding at 3:40.

ADDITIONAL LINKS & WHATNOT
The band has an upcoming show on February 25th, 2022 with Canyons and Dug! 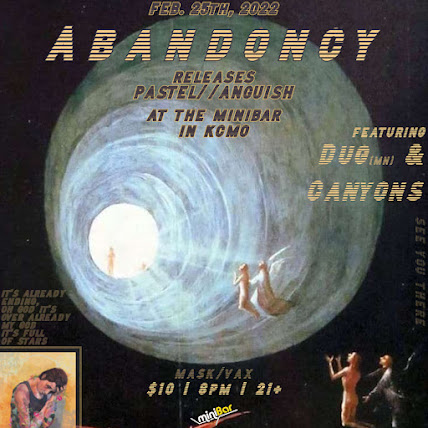 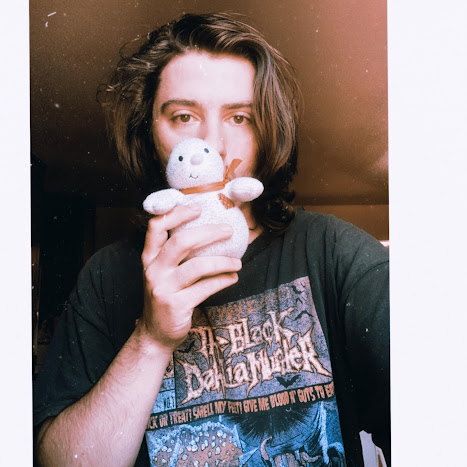 In exactly one month (March 8th, 2022) TO BE GENTLE will release their new 12"LP on Larry Records and ICorrupt Records. That'll make 37 releases in 4 years, and it just warps the mind. Not only is it a lot of output, but holy moly it's all incredible work aaaaaand it's across a myriad of genres. So in the off-chance you haven't stumbled onto TO BE GENTLE in the last 5 years here's a very assertive HEY, GET YOUR SHIT TOGETHER AND JAM THIS BAND ALREADY, YEESH. Things discussed in this podcast: Screamo In General history book, Youtube holes, obligatory UHF push, Dave's shame, rockin' the tuba, getting into metal/punk/screamo, Jack Shirley on Nail The Mix, the effects of Gillian Carter, longer screamo songs!, Triple S-Tier Screamo, screamo is blackgaze and blackgaze is screamo, being yourself, the Opheliac collaboration, the future, selling out of copies in one day aka Reversal Of Man, etc. Bands played in this podcast: Encarsia, Gillian Carter, Hawak, Nulajednanulanula, Pale, and Swan Of Tuonela. Listen to podcast #82 which is available to stream and/or download for free via this link.