YET ANOTHER DECADE LIST
(That you never asked for, but I wrote it anyways) 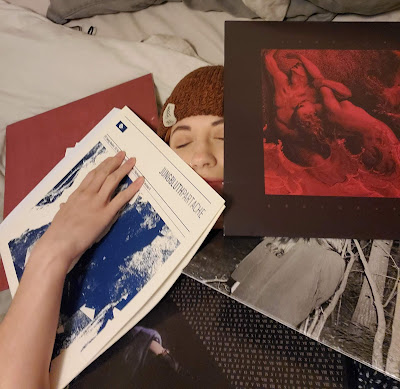 I didn’t get into screamo, emotive hardcore, skramz, “I really like the instrumentals but why do
they have to scream?” music until 2015. It was a perfect time because I was in the depths of
managing 20 years of untreated depression and had my core friends move to the coast. I never
would have thought this genre of music would be so influential for me in the last half of the
decade, and I’ve been able to make fulfilling near and far distance friendships because of it.
So, for my 5-year anniversary and for the end of the decade, I decided to list five albums that
came out in the last 10 years that had a huge impact on me.

2011: Beau Navire - Hours
Atmosphere for years, basslines for months. Hours is one of those records I hold dear to my
heart. It’s like listening to a novel, the transitions from track to track flow so well. A particular
highlight comes from the transition between "Reinventing the Veil, to Respire (meta)". I always
feel a strong sense of ennui listening to "Respire (meta)" after listening to the first four tracks. I
never get tired listening to this album and often put it on at early morning or dusk.
Favourite track: The Looking Glass (Bare Trees is a close second)


2013: Jungbluth – Part Ache
For all you Alpinist purists who have slid into my DMs over the years, yes, I know… but
minus​.​mensch came out in 2009. Sorry those are the rules.

That being said, if you want something to lift weights to while feeling existential dread, this is the
record for you. – I’ve tested it – This album is heavy and dark and intense. Bass and guitar tones
to die for. The vocals are raw and powerful. It sounds like the band locked up the main vocalist
in a room with rabid wolves during recording. (I hope they got out okay)
Favourite track: Looks Like Freedom


2017: Frail Hands – S/T
I remember the week this record came out. I was starting my fall semester and had to take the
number 7 bus, which is one of the worst bus routes in Edmonton. But you know what isn’t the
worst? This album. The riffs are catchy as hell which often get stuck in my head. I love the vocal
distortion and the mix is fantastic. The melodic guitar parts soar over everything seamlessly. A
perfect record to listen to when it’s -20 degrees Celsius waiting for your bus.
Favourite Track: Crematoria


2017: Øjne - Prima Che Tutto Bruci
Fun fact, did you know Italian speakers are less likely to be dyslexic because the syntax rules in
Italian are more consistent compared to other languages?

I don’t really know how to describe this album either than beautiful. I often listen to this album
when driving through the mountains or walking outside in the snow and it complements my
feeling of awe being out in nature. Beautiful melodies, wonderfully arranged, and to top it all
off the vocals are so passionate and dynamic. I also tend to dance to the second half of "Tredici"
with my husband.
Favourite track: Ogni Inverno


2018: Respire – Dénouement
AKA Broken Social Scream, God Scream You Black Emperor!
Never in a million years would I have predicted a crossover of what I loved best about Canadian
indie music and screamo. This record is beautiful and painful and uplifting all at the same time.
While the vocal trade-offs, soaring violin, blackened guitars are fantastic, my favourite
segments of this record are the ambient atmospheric parts, which allows me to contemplate
life and how damn beautiful this record is. If you have a chance, see them live because it’s a
beautiful experience.
Favourite Track: Catacombs


So that’s it! It was really hard to reduce my favourites to only 5. If you’re curious about my
favourite 2019 screamo record of the year, check out my review of Elle – Ellipses.


*Amy plays in Obroa-skai and screamed in Rayleigh.
Posted by Dave Norman at 20:44