I think I may have checked out HEX LARIAT in late 2016 when 'Subaqueous' was released but, for shame, they fell off of my radar immediately. Luckily in mid-2018 the two-piece collaboration project released 'Empyrean' and the band immediately caught my attention to the max. They play a very diverse concoction of punk, hardcore, screamo, black metal and post-hardcore. Some songs rip through in 30 seconds while others slowly traverse through five-plus minutes of ambient yet still hard hitting hardcore. Out of everything awesome here, the vocals are probably my favourite things. Top notch, says I. The screams are nightmarish in their delivery, like a less feline sounding Johnny Whitney - harsh, sharp and venomous. Holy bujeesus, those things shred. I personally find myself enjoying the better recording and thicker sound of the screams on the new LP, but the first LP is still very piercing. Let's take a look at that disco, shall we?

'Subaqueous' was released in December of 2016, and was automatically partially lost in the shuffle of me compiling a year end list, as releases in that month, especially later, so often are. This debut album also features Shawn's partner Lauren on violin, which gives some of the songs a bit of a Loom and Sinking Steps, Rising Eyes, only much more urgent and cathartic. Opener "I" is a sludgy, dark and lo-fi romp through both dirty and beautiful hardcore, including a gorgeous midsection that brings instrumental giants Omega Massif to mind. "II" is a much shorter endeavor, only just cracking three minutes, and is more in line with the average HEX LARIAT song length. The vocals here sound like they were recorded through a broken megaphone, giving them an ominous, raw feel, and they really mesh with the chugs and mammoth crashing of the drums. A few seconds into "III" and you'll think this is a split, as it starts extremely light-hearted with those guitars, but soon the vocals come in and you're reminded that this is still, in fact, HEX LARIAT. The subsequent build with the bass is very Moss Rose and might be the highlight of the record for me. "IV" is a short and violent precursor to what Under Glass sounds like, "V" is much more vast, taking the time and space to expand and adapt to its environment, although the last half is pretty darn dense and intense. The closer and by this point very obviously titled "VI" is another relatively slow, subterranean, eerie and ominous trek that exhausts itself by 2:41. 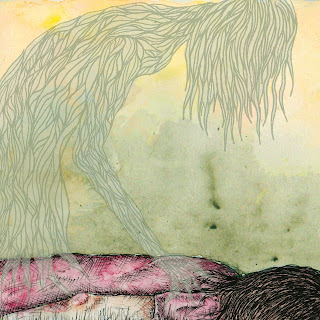 This year's LP is fucking sick, plain and simple. It features artwork by non other than elite screamo artist Connie Sgarbossa and houses twice as many songs as the debut. 'Empyrean' is all over the map, but I don't mean that in a disorganized and disjointed kind of way, it actually flows really well, just don't expect any obvious shifts or generic song structures. It opens with the raging continuation of the previous EP, titled "VII", which after a brief, quiet introduction, proceeds to tear shit up with an additional hook of subtle melodies and outright wildfire from one minute onward. "IX" is only 32 seconds but it's another rager with exceptional vocals, as is "X". "XI" opens in crushing fashion with deep and dark growlss before moving into fast and shrieky emo-violence. Besides the fast, chaotic stuff, you've also got your breezy "VIII", an interlude at "XII", the chill "XV" which gives off a warm, ambient light and the cavernous and brooding opening of "XIII" reminds me of Welcome The Plague Year, Corea and OsoLuna. "XIV" somehow manages to mix scorching. screamy hardcore with some Desaparecidos-esque singing, and goddamn it works really fuckin' well with those playful guitars. "XV" walks a very graceful line between claustrophobic hardcore and experimental post-hardcore/rock. "XVI" follows and is another slow and atmospheric song, but this is much darker, depressing and is constantly threatening to go ballistic, although it never quite gets there. The dual vocals in "XVII" are fantastic and make the song epic as fuck. I especially dig the calm, serenading outro that wraps it all up, while "XVIII" wraps up the LP in fine form as it will annihilate any hope you have of resisting how awesome this release is.

I don't know when this project will release again, but good goddamn I'm gonna be all over it!