I should begin this post by giving a digital high-five to Jesse Mowery, for he handed the 'Fade' 7" DRIFT to me in a Rhode Island record shop on the second мятеж tour and said, "This is Canadian and you'll really like it". And here we are. 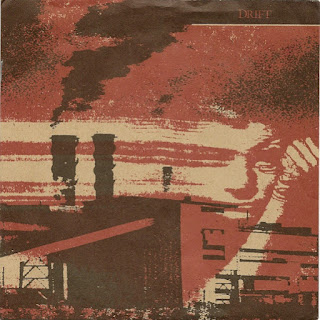 DRIFT sounds a heck of a lot like the stuff coming out of Bremen at the same time (Carol, Acme) as well as some of their fellow Canadians (Union Of Uranus, One Eyed God Prophecy), so it's hardcore with strong metal leanings, driving/chaotic instrumentals and destroyed vocals. They've only got four songs spread across two releases but every track is fire. Their three jams on the 'Fade' 7" are very much in the vein of mid-90s Canadian/Bremen hardcore and pack a serious punch, none more so that title track "Fade", which is a five-minute clinic of dark, sludgy hardcore. There's something truly special about the other two tracks, as "#8" injects a lot of melody and dare I say early post-hardcore during its first half, but shreds the listener apart during the second. After a few nice chugs on "Swindle", the song shifts into some seriously sinister shit and at points has a hint of early Saetia in the vocals...but I guess it would be the other way around. Their final song on the 'Jonah split' is titled "Life Goes On" and is their lengthiest endeavor at 5:48 or so. The song begins during a violent whirlwind that absolutely decimates come 1:14, which they magically transition into a groovy jam that continues to drop sick section after sick section for the song's duration.

Maybe one day the band will contact me or someone else and we'll get a discography out, until then here's a download made from my two copies of their records.

***UPDATE my friend Drew let me in on the fact that DRIFT had three comp tracks, all of which are now included in the download and have youtube embeds below. They also said the following about the tracks:

"Disease" is the earliest Drift release, from the 1994 compilation Quebec Crusade For Auditive Savagery Proliferation!! (with two exclamation points like that haha) on Doomsday Machine Records.  I couldn't find the whole comp but someone online did have the track so here it is. Shit is real primitive, fast and crusty, but you can tell it's them.

Then there's "Rights For You," from the Books To Prisoners comp EP on Young Heirs Project in 1996. This is a little more like the blazing black-metallic hardcore on the GASR EP (which came out in 95), but also sounds more to me like it's from the same session that produced "Disease." I'm assuming this is an early track that hadn't come out yet and was left over from an early session -- perhaps a demo no one's ever unearthed in the modern era? Who knows.

"Words That Burn My Ears" is from the Food Not Bombs Benefit Record on Anima Records, 1997. This has a lot of other bands on it that should interest you -- Anomie, Palatka, Constatine Sankathi, Holocron, etc. The Drift track is fully mature Drift, sounds if anything like another from the session that produced "Life Goes On" -- which was released around the same time on the same label, Anima. By this time, Drift were broken up.

1996 - Books to Prisoners 7"EP compilation (contributed "Rights For You")