In case you missed it, which you probably did, the long-awaited 'Cuddlemonster' 12" by THE SAWTOOTH GRIN sold out in less than an hour, with two of the three variants lasting only five minutes. Will it be repressed? No, that's not how Wax Vessel rolls, so we can all stop asking. All the more reason to stay on top of new releases...psssst the next one is November 18th!

Hi, Rich. How are you keeping?
R: Hi! I think I'm keeping well. Well, but busy. Too busy? That's the real truth of it, right? "I'd be great if it wasn't for all the things I have to do." Life is mostly great! Husband, Dad, Home owner, etc. I have a lawnmower, it's electric. I think a young person would look at my life and classify it as boring. That thought works for me on every imaginable level.

Could you tell us a bit about how the band formed, what inspired the name and what lead to the band's initial exposure back in the earlier days?
R: Well, Thomas and I were in a local Westchester band that sort of sounded like Shai Hulud. 6 people in that sonofabitch! Two singers! Anyway, when that band split, half of us formed Sawtooth, and some of the other guys would go on to form the Heatherton Heatwave. I had the name bookmarked in the back of my head for a while. Something to evoke... not toughness, but insanity. The band formed in 99 or 2000? So long ago. The initial lineup and material looked and sounded quite a bit different. A bit of an early Cave In vibe, maybe a little dirtier sounding. We even played a gig! This first incarnation of Sawtooth fizzled a bit after writing a few tunes. The Heatwave started acquiring members from across the Hudson River, in Rockland County. That's how we met Jay, and eventually Chris Russell. We were then, very much, off to the races, so to speak.

What was the writing process like for the band's material? I've noticed some Jazz influences creeping in for example. Did you take any other outside influences into the songwriting approach?
R: My approach was to pester the rest of the band to write material that was less appealing, more obtuse, and harder to like, all while knowing significantly less about playing music than anyone else in the band. It's the Captain Beefheart method, and I swear by it.

Rich you are well known for your distinctive high pitch screams. Can you elaborate on the artistic choice for this direction?
R: The only really intentional choice I made was that I was going to scream for real. So many of the genre's vocalists do what I call "aggressive music vocals TM". It sounds like a scream or a roar, and maybe it's a cool or tough noise when amplified, but, in reality, they're  barely above speaking volume, doing an impression of a tiny gremlin. My whole thing is that I scream, as hard as I can. What comes out of me is less conventionally cool, but arguably more authentic. I don't sound tough, I sound like maybe I'm being killed. Some people think it's great, and some people hate it. Polarizing a demographic suits me just fine. I could teach a class on it.

How did you approach penning lyrics for Sawtooth's material? Were there any particular themes or did they draw from personal experiences?
R: I hate lyrics. Obviously, that's a sweeping generalization, but go with me on this one: I have nothing important to say. I'm not particularly political, so I steer clear of that because A: How much of a beating can that dead horse take? and B: I'm kind of an ignoramus! I don't watch the news or pay attention to anything outside of my own interests. So, if Sawtooth's lyrics were political in nature they'd be both dumber and more derivative than they already are! Something else to note is that I'm also not a particularly emotional person, so I try to stay pretty fictional when I write. I live a happy, drama free existence, but I've always been drawn to dark fiction. I was thinking about it the other day: "Do I actually like anything that's pleasant?" The answer is "No", I guess. I'd much rather be a proficient band that's generally not about anything. The Seinfeld of Loud music. I've always said "What we have to say isn't as important as the sound we use to say it".

Were there any bands that you would cite as influences that helped to mould the direction of the band?
R: I think we had a lot of different influences from band member to band member. There was a fair amount of shared interests, for sure, but I think, if you could talk to everyone individually, you'd get a lot of different answers. For me, vocally, I had to spend a fair amount of time looking outside the genre. Looking at James Brown or Wilson Pickett, who had really great, authentic screams. Within our more applicable spheres, I gravitated towards Grindcore and it's offshoots the most. Discordance Axis, Mortalized, and Naked City were big eye openers for me. As for other subgenres that end in "Core" there were a few standouts. I really loved what Drowningman was doing vocally, and anything Steve Austin produced, primarily because he'd do backing vocals on those records in addition to producing. At the time, I was listening to plenty of death metal too, but none of it grabbed me, vocally. For all that incredible musical brutality, A low growl very rarely measures up.

What was the process like whilst recording both Cuddlemonster and Pervavor?
R: Not nearly as horrible as I would have expected. Borderline pleasant, even! Of course, we had an ace engineer in Jay DeZuzio. He really took care of us and made the best effort to capture the very specific thing we were angling for. Regarding the vocals: We took a very expensive studio mic and stuffed it in the back of a piano. Then I had a handheld to scream directly into. So we had the two mic's going a bit hot to get that live feel. A studio setting can really suck the life out of a scream. Especially if you cultivated said scream in a live setting. I also tried to not go too crazy doing take after take. One or two runs through each tune and a bit of doubling up for some gang vocal moments. I think we hit an interesting mid point between psychotic and annoying. My true wheelhouse.

Can you list some post Sawtooth projects that you have been involved in? Are there any current projects in the works?
R: Well, I did Cloacal Kiss, Snake Baptist, and Old Painless. Of those groups, Old Painless technically still exists. We play occasionally and are lazily threatening to record a full length. File that under "Someday". I've also got a bit of a long distance, internet project going on that's basically ready and waiting for me to throw vocals all over. The problem is that, without being in a band that practices regularly, I don't have a space that's easy to record in. Plus, I'd rather record after getting fully back in vocal form. I think I'll end up recording that stuff when we get around to doing the Old Painless LP, as we'll have had to have practiced our asses off to make that happen.

Were there any contemporaries during Sawtooth's existence that you would have liked to have collaborated with, be it a split release or guest feature on a particular track?
R: I've always had a pretty strict "No guests" policy about albums. Something about wanting the authoring band being responsible for all the sound you're hearing appeals to me greatly. With that being said, I've always had this idea that it'd be pretty neat if we could've done a spit with a band, and instead of it being "Here's some Sawtooth tunes and here's some tunes by another band", we'd just create one big band and co author a batch of tunes. I'm not sure what bad would've been best to do that with though.

What are your thoughts on the current revival of this particular era of noise based music, especially bands who cite Sawtooth as an influence?
R: I still can't believe that anyone would look to Sawtooth for inspiration, but the idea that bands want to push forward in this direction again is great. For a while now, I've felt that aggressive music in general has reverted back to the ideas and tendencies of a bygone, long surpassed era. That's great if your only agenda is to prove that you're well versed in the history of Grindcore, Hardcore, or Powerviolence, but it ignores what I consider to be one of the central principals of aggressive music. To escalate. In recent years, we've seen bands strip away their most visceral and technical elements in the name of  "Experimentation" or "Maturation" but what they can't claim is that they're escalating their sound. They're not playing faster, or crazier, or more technical. They're using aspiration terminology to justify playing beneath themselves. That's why I'm so excited about this current revival. The possibility of the return to escalation.

Do you have any interesting tour stories?
R: Jay and I once got pulled over on an overnight drive from Ohio to home. I was falling asleep and all over the road when we were stopped by some state troopers. They shone a big light on us and asked that I step out of the car. What I had forgotten was that I was actively wearing two Roy Rogers french fry holsters on my belt that I had put on after eating at a rest stop earlier in the evening. Once we got past the moment where the Troopers almost shot me over it, we all found it pretty funny. In the end, I thanked them for pulling me over, as I would most certainly be wide awake for the rest of the drive home.

What are you listening to right now? Anything you would recommend?
R: Besides podcasts about pro wrestling and Twin Peaks?  I just got off a big Harry Partch jag. He was an American composer who invented his own scales and instruments. He was born in 1901, so none of that stuff is new. I like the newest stuff from Beirut and Neko Case a lot. As for loud stuff, The new Fawn Limbs and No One Knows What the Dead Think have my strict attention. 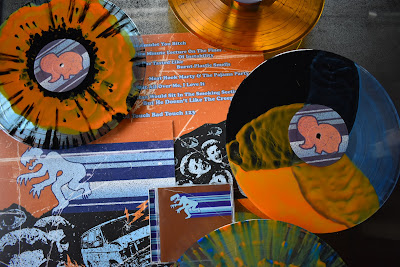