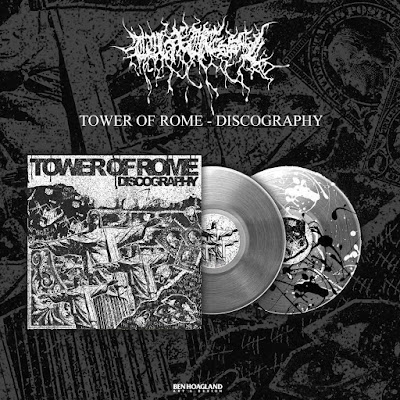 TOWER OF ROME was a grindcore band that hailed from South Holland, Illinois. They originally formed as a three-piece band consisting of vocalist Joshua Snader, guitarist Tony Marzilli and drummer Aaron Guitierrez. A short while later the band would round out the fold with Mike Serrano joining on bass duties.

TOWER OF ROME first came onto my radar around the height of the Myspace era and have remained a firm favourite of mine since then. Their initial rise to popularity began prior to this when the band uploaded some well received demo tracks to the music sharing website hxcmp3.com. This website would also feature other related contemporaries such as The Sawtooth Grin, Thumbscrew, See You Next Tuesday and Bodies In the Gears Of The Apparatus to name a few and helped to spring board their rise to popularity as well.

The band's 2003 'Tower of Rome Demo' featured 10 blistering tracks of high energy blast driven grindcore. TOWER OF ROME also moulded this abrasive sound with a chaotic twist to killer effect. Musically, the band featured a heavily distorted guitar and bass sound with some chugging metallic breakdowns thrown in for good measure. The percussion featured what would become Aaron's signature popping snare drum sound. The vocals on this release featured an obnoxious and sneering delivery akin to the likes of vocalists like Justin Pearson or Mark McCoy. Each track on the demo was given an absurdly named song title, which was an inside joke reference for the band members themselves. The band packaged all the physical copies of this demo release as CD-Rs in manilla envelopes with Xerox'd inserts in true DIY fashion and sold them at shows to further extend their fan base.

Following a meeting with Hewhocorrupts, inc label owners and fellow Chicagoans at a live show, the band would sign to the label and release their acclaimed debut full length, 'All Is Lost, All Is Lost, All Is Yet To Be Found' in November 2004. The release featured 11 crushing tracks that the band buzzed through at breakneck speeds in just under 10 minutes. The recording production saw a much crisper and polished approach. This further accentuated the bombastic direction that the band had delivered on their demo. Re-recorded versions of some of these demo songs were given even more intensity, by having the drums and vocals pushed to the forefront in max effect. Standout tracks like 'They Say She Died Because She Was Too Honest", "I Want My Fifty Dollars' and "Girls That Smoke Gross Me Out To The Max" perfectly highlight TOWER OF ROME's intention to audibly knock out the listener with unrelenting assaults. As Hewhocorrupts, inc quite aptly put it, "Pick up the disc and get dat ass kicked!!!".

In 2005 the band worked on a split release with fellow Chicago based grindcore outfit Gun Kata. The material on this release showed some further progression on their already established sound and approach to songwriting. However, the recording production on this split went into a much rawer and dirtier lo-fi approach. It gave the split a messier and visceral feel. The vocals also strayed somewhat from the sassier yells which featured on the demo and full length. Josh adapted more of a corrosive screamed delivery here. I found this really complemented the overall urgency and savagery of these songs. At a mere 24 seconds, "Rewriting the Plotline of a B-Grade Slasher Film" is an excellent example of this. The material on this split was also used as a homemade CD-R that was sold by the band during their 2005 summer US tour with Stand Before the Firing Squad. This release was titled the 'Summer Tour EP' and 200 copies were made overall.

The band's second full length 'World War 1' was released in 2006 and would showcase a slightly newer direction taken by the band. This album would feature a matured songwriting approach, with some songs veering over the one minute mark. The tracks would also incorporate a moulding of some newer genre influences, thus broadening the band's tonal palette. Concerning the artwork and production, the band would take a complete inverse approach from their debut full length. Gone was the bright colours and overall visual vibrancy from before. WW1's cover is a minimalistic and stark grey and white layout. The contrast of this imagery would help match the brutally raw and sandpapered textural sound that followed once the listener hit play. The recording also had a distinct rough and messier old school grindcore sound, but managed to attain some form of audible cohesion for the listener. WWI also saw the band dropping their sassier and noise rock influences from prior releases and adopt a more traditional blast driven and double bass heavy grindcore attack. The throat-shredding vocals also shared some similarities with the Gun Kata split and introduced some deeper mid-range moments as well. My personal standout tracks would be 'I Have To Tell You Something...I Eat Light Bulbs', 'Save Art; Kill An Art Kid' and 'Does Your Friend Have A Name Or Should I Just Call Him Lawyer?'. I feel these tracks best illustrate the intention TOWER OF ROME had set out to achieve with this album. Turn it up real loud and piss off your next door neighbours.

To help with the promotion of WWI, the band had planned to tour all over the US and head abroad to Europe. Unfortunately, the band would be put on hiatus later that same year. This was due to touring difficulties with their van and other set backs regarding their band equipment being destroyed in a flood and having to then cancel a slew of shows as a result.

In 2007, the band reunited. They wrote around 5 to 6 newer songs and played some shows before eventually bowing out completely. TOWER OF ROME has affirmed they had never officially broken up, but just quietly became more and more inactive. Members of the band would later move on to join other projects, most notably the post hardcore band CSTVT and the powerviolence band Sea Of Shit.

It should probably also be mentioned that there is a TOWER OF ROME 12" discography coming soon via Wax Vessel that includes a poster and stupidly beautiful vinyl. Big news on that soon 😏