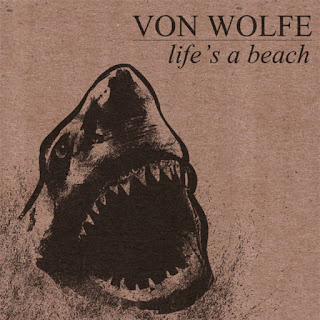 I don't know where I first heard about VON WOLFE, but if you like Every Time I Die, early Norma Jean and that sick new 'Sleeping Dogs' LP by Dead Hour Noise then I highly recommend this snarky, playful, chaotic, short-lived and awesome Daytona Beach band. Releasing but a single cdEP in 2011 titled 'Life's a Beach', the album still kicks ass to this day.

'Life's a Beach' opens with "Out of Workaholic" which gets the Every Time I Die and Norma Jean mix going nice and early. There are half-yelled/half-screamed vocals, breakdowns and changeups galore, making it a great introduction to the band. Their ability to combine melody with a flurry of precise and focused aggression is most excellent, and put on full display on the following track "The Great Kneer". Despite a bunch of great material, it does lack some diversity as the tracks kind of blend together without many distinguishing features. I'd be a fool not to mention the awesomeness of "Scumbaguh Doughnuts", the fan-favourite and obvious choice for one of the more unique songs on the EP.

I guess there isn't too much left to say. They released just this one EP, but you can check out a full live set below if you're hankering for more.