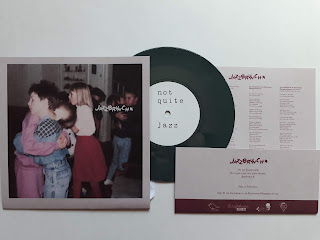 In early 2019 my friend Arvid of Vi Som Älskade Varandra Så Mycket sent me a song from his new project with members of his band, Metroschifter and Totem Skin. It was "Idiocracy" and I pissed my pants. He then sent the b-side "An Invitation to an Enormous Disappointment" and I blew out my back end. It was a messy ordeal but it was worth it, as we worked out a plan with Zegema Beach and a few other labels (Dingleberry, Smart & Confused and Zilp Zalp) to release 200 vinyl 7"s. I sent them off to the plant to go on "mixed" colors...but all 204 copies came back on a dark, earthy green (which looks nice but wasn't what I was expecting) and then printed out 8x10 insert/jackets and used the page excess for a back flap. At first the inside is confusing as you'll notice that the EP with two songs has four lyrical sections. This is because two are the real lyrics and the other two were written by his partner as what she thought the lyrics were when listening to the song. Needless to say, it's a hilarious read.

Speaking of hilarious, they even have a tagline that I stamped on the center labels, "Not quite jazz, not quite brunch. Jazzbrunch." Soon after we received the vinyl my friend Caleb at Captured Howls premiered the music video for "Idiocracy", which is a hoot to watch, as it is cuts from old videos that Arvid took of his friends and himself headbanging...literally everywhere, including out of a car window as his friend is driven away. The second music video was premiered here and is much more story driven, as we follow a young boy and man with painted faces in different shots, riding bikes, walking on train tracks, screaming, etc.

"Idiocracy" builds through dark, gothic sounds until the vocals sweep in with a wall of noise and then...and then a John Carpenter-esque lone piano chimes in at the minute mark and very well steals the show. It's perfect and underused, making me crave it all the more. Then the crushing double-bass blackened screamo kicks in full force, reminding me of Suffocate For Fuck Sake's more chaotic moments. A warbly, noodley passage follows, eventually erupting in symphonic bliss just after four minutes. It's a lush, driving and irresistible melody that, although laced with venom and screaming, still manages to create serene calmness and a sense of liberation.

The other side of the 7" is "An Invitation to an Enormous Disappointment", which begins with a cheesy piano intro that somehow morphs quickly into something that wouldn't sound misplaced on the new Nionde Plågan record. It's unlikely that you'll be able to resist humming along to the next progression that swings in like a trapeze artist right before the one-minute mark. Honestly it's like orchestral screamo and it sounds amazing...like Norwegian black metal mixed with Japanese post-hardcore and I can't get enough of it. A chill section follows in obvious Vi Som Älskade Varandra Så Mycket style before they whip back around to that euphoric swing. At 4:30 the conclusion comes in like a gorgeous, bright, swelling apocalypse and snatches the listener away until their eventual return with an LP. Or at least this is my hope.

"An Invitation to an Enormous Disappointment" music video premiere + interview