Genres: Punk / Hardcore / Metal
Related artists: This Land Is Now Dead, Listless, Never Better, Coma Regalia, Hundreds Of AU, What Of Us, NY In 64 and about a million others.
Country: U.S.A.
Years Active: 2018-present
Song: "contorted, down in it"
Album: "Metastatic"
Year: 2018
For fans of: This Land Is Now Dead, Listless, Tentacles, Carol, Never Better, Cloud Rat, Computer, Makara, The Assistant, In First Person, Converge, Carl Johnson, To Dream Of Autumn and Acme aka PROPER SCREAMO. 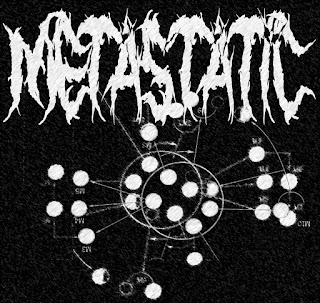 METASTATIC is the evolution of Never Better, who changed their name after switching up vocalists. Vanessa from Digest/ex-La Luna was unable to help with this release so Shawn Decker scouted Steph from This Land Is Now Dead and Listless to provide the throat-shredding screams. And with this seemingly slight shift, the band ended up diving down into much deeper, darker and nightmarish sounds. Their self-titled 'Metastatic' EP was released late last year on Middle Man Records and is quite possibly the heaviest thing I heard in 2018. The instrumentals took a more sinister turn, but those vocals are straight up hellish, demonic and sound like someone being tortured and shrieking in sheer agony. It's honestly taxing to listen to (in a good way) because of how raw, extreme and unnerving those screams are.

The EP opens with "contorted, down in it" and by the 20-second mark you'll likely be mouth agape at how fucking ridiculous those layered shrieks are, good lord. The song hits it's climax right after the one-minute mark and buries any eardrum remnants you may have had. "nights without censure" is probably my favourite of the seven, as it really boasts Tom's metallic hardcore guitarin' and reminds me of The Assistant and In First Person if they were even heavier. Midway through the song there's a bass bomb that goes off and leads the explosive second half to its devastating conclusion. Holy shit, that is ballin'. "at the time, shrouded" begins much slower but is just as prodigious and intense, with the second half hitting at double time. "after watching you die" is a Shawn Decker clinic with some of their best drumming, and the rest of the track ain't too shabby either, with a bit of a Tentacles feel going on before the brief, transitional interlude right before the midsection that houses some excellent guitars as well as the subsequent breakdown and axe wails. "your death lingered" is another standout track with a punishing-yet-groovy second half, "always close by" has screams so intense they almost tear themselves apart, and closer "the temptation to pour water on an electrical fire" is another Schlatter riff-fest.

I was very excited for Never Better with Vanessa, and was a bit concerned when I found out she was unable to participate with the new material. After hearing METASTATIC and what Steph did with this, I'm ecstatic to have two very different and very amazing bands to jam.

Oh, and I asked Shawn if they'd like to be interviewed about this recent release, to which they responded yes. So...here ya go!

Would you consider Metastatic the continuation of Never Better, or has the new vocalist made this something completely different?
Well of course it was meant to be a continuation of that but when Vanessa decided that they couldn’t continue with the project I know that Tom went back with new intentions and changed some very fundamental things. Our idea was to keep pushing it forward and once Stephanie put their vocals on especially then I just can’t even fathom it being any different. It’s definitely it’s own thing in both the way it sounds and feels.

Did you have any other ideas set out before writing/recording? Or was it more of a "let the music flow and it is what it is" kind of thing?
A lot of the time I just try to come up with interesting structures for Tom to build on top of but to be honest on this recording I did something that I thought might be a little out of his comfort zone just to see what he would do and of course he crushed it.

lol no surprise there! What is Tom's comfort zone? I assumed it was Dawntreader records playing whilst watching a superhero/science fiction show and being covered in cats. Oh, and he's eating a falafel.
Ha ha. Apparently his comfort zone happens to be wherever he is at the moment with guitar in hand. I’m going to risk being awkward right now by saying what a true honor it is for me to be making music with someone whose music has had such an impact on my life. Thank you Tom. I love you.

How did you two first meet?
We met 20 years ago when The Assistant played a show at my house. I was a huge fan of you and I at the time and we for sure had some awkward conversations that night. Thankfully Tom didn’t hold any of it against me. He even serenaded us in my living room by playing "Every Rose Has its Thorn" on my acoustic guitar.

I mean, Never Better was heavy, but Metastatic if fucking heeeeeaaavvvvvyyyy. Was that intentional?
Yeah. It was. We said that we wanted it to be heavier and noisier. And then when it turned out it was going to be a whole new thing I know Tom went into a lower tuning as well so that was definitely a factor. Also Stephanie’s vocals are just incredible. We had talked about not necessarily the subject matter but the intention behind the vocals and how sometimes when you sing about something that’s painful for you it’s really difficult and affects you in a way that you might not be ready for until you are doing it. I feel like that concept itself comes across in a major way.

Those are some of the most intense vocals I've heard in a long, long time. Also, you and Tom provide zero vocals on this, correct?
That’s right. It’s all Stephanie.

How did Stephanie become the new vocalist?
Well, you were at Swamp Fest 2. That’s pretty much how. They blew me away in that This Land Is Now Dead set. I had been wanting to work with them on something since then so this was the perfect time and place for that. Shout out to Thom for recording Stephanie’s vox, btw.

That was such a good fest, pity there have been no more since 😞 Yeah they were phenomenal! Do you have any plans to play shows?
We talked about it a little bit. I would love to. I think the biggest obstacle to overcome is finding out when all of our other respective bands would not be touring or if by some magic we were all touring to the same spot at the same time that would work.

What was the easiest and most difficult thing about the Metastatic EP?
Easiest I guess is just... working with Tom. He just takes whatever I throw at him and sends me back incredible ideas. Then he fleshes them out and somehow these incredible ideas are even better.
I can’t speak to things that may or may not have been difficult for other people. The only kind of hangup we had near the end had to do with file sizes. Nothing Steve Roche couldn’t figure out. His mix on this is out of this world.

What is next for the band?
We talked about doing another release but everybody is super busy right now. I know I would love to. I hope we can get started with it maybe after summer and everyone is done with their tours and stuff.

As always, thank you Shawn 💓