LOWMENINYELLOWCOATS are the second band in a row that were introduced to me by the great USofDave (aka Dave Cullen in Crowning/ZBR U.S.A.). After helping me with ZBR for a few months he asked if we could do something for a band he'd been following, and he'd take care of everything. And so he did. Low and behold the 'Lowmeninyellowcoats' LP came about on Zegema Beach Records as well as our sibling label Tomb Tree Tapes and it's a fucking banger of riff-heavy, screamy, audio-clip savvy hardcore. I think the closest comparisons I've got are Gillian Carter, Cougar Den and Terry Green with a touch of The Fall Of Troy, which is pretty goddamn sick company. 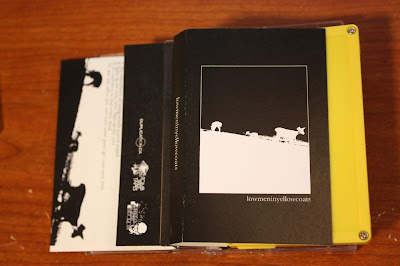 The three-piece from Akron, Ohio originally released a five-song demo in 2017 called, fittingly enough, 'summerdemo'17' that despite it's low quality production, turned some heads. Most of those songs ended up on the LP, including "do you need me out there, do you need my assistance?", "submitted for the approval of the midnight society" (over two tracks), "light up the eyes, boys. light up the eyes" and "the importance of being ernest scared stupid" so we'll just jump to said full length.

'Lowmeninyellowcoats' was released on September 11th, 2019 and opens with "do you need me out there, do you need my assistance?", sitting on a subdued clip and acoustic guitar for nearly 20 seconds before the frenzied guitar slides and gets things going LOWMENINYELLOWCOATS style. Ridiculously fast drummin', equally rapid bassin', broken screams and some seriously distinguishable guitar wizardry, all wrapped up come 2:14 with an excellent, epic, slowdown. "you're a marshmallow, glenn", "touch fuzzy, get dizzy" and "light up the eyes, boys. light up the eyes" have a more aggressive edge, and in doing so end up being slightly shorter than the other tracks. "submitted for the approval of the midnight society" has a nice jammy opening that builds up steam and goes all out by the 35-second mark. I love the crunchy palm-muting in this song, as well as the multiple stop/starts, guitar squeals and screamiest of all of their vocals, not to mention that excellent vocal placement and lyrics during the somber section at 2:43, "I'm so sorry starry eyes I was tongue-tied, and my memory is all black and white." If you enjoyed the chill stuff then you'll dig the acoustic/instrumental and very Die Emperor Die-esque "dr funke's 100% natural good time family band solution". "i have to return some videotapes" attempts to balance the chill with the chaotic and does so quite well, "the importance of being ernest scared stupid" is both excellently titled and after a minute intro it fucking rips. "if i had been in that water, dead" may have been written by Merlin himself, cuz that's some Hot Cross/Gaff shit right there. Closing track "spit spit saliva spit. you want some gum_ get your own, twit." is remarkably dark compared to the rest of the record and spends a good 1:45 on an expansive, experimental journey through some subterranean caverns before emerging above ground, delirious and rabid. Things get pretty dangerous around 2:20 with the band laying waste to their instruments before being subdued and strapped down for disturbingly proficient screamo behaviour.

I dunno what's next, but I'll be all the fuck over it.

(2019) LOWMENINYELLOWCOATS - "if i had been in that water, dead" (from 'Lowmeninyellowcoats')

(2019) LOWMENINYELLOWCOATS - "do you need me out there, do you need my assistance?" (from 'Lowmeninyellowcoats')