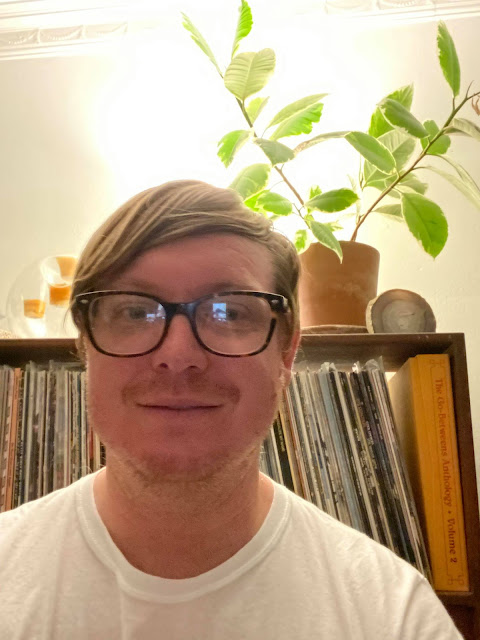 I spoke to Seth Robert Babb. I'm a huge fan. Funeral Diner? Hoooooly shit Funeral Diner. Repeater Records? Mmmmmm yes please Repeater Records. Tons of info on one of the most influential screamo bands (and their vocalist!), a new-ish and very exciting label, as well as tons of other stuff including: meeting Danzig, Reversal Of Man discography, high school ska band, Stirling Says, mind-blowing mixtapes, the transition from Walken to Funeral Diner, being second tier, the writing/theme of 'Underdark', losing momentum, being in a band with the drummer of Portraits Of Past, playing Magic on tour, finding Milemarker's disposable camera, Seb Alvarez love, yelling at clouds, Punishment Park, the band Pills, and lots more. Bands played in this podcast: Black Nail, John Henry West, Meth., Noose Sweat, Ovlov and Wrong War. Listen to podcast #70 which is available to stream and/or download for free via this link.

My friend Will Terhove from Vancouver sent their new band to me a few months back and I was iiinnnnnnnto it. The band is NOOSE SWEAT, and the three-piece includes prominent DIY figure Tommy Wilson as well as Jason Macneil (who has also played in numerous bands). The powerviolence/grind/noise trio released the 10-song 'Demo' digitally back in May but I had to get involved, and did so with Tomb Tree Tapes who just released 55 cassettes of this thing. 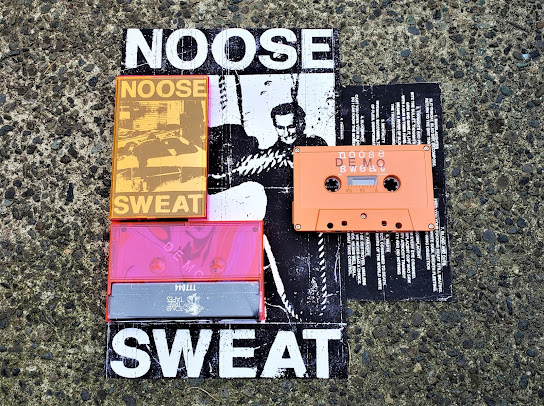 Name some bands? Okay. Straight up, I don't generally listen to too much of this style. Buuuuuut after falling hard for Bucket Full Of Teeth back in the day, and having Will Killingsworth and Brad Wallace show me perpendicular crossovers recently, I became instantly attached to the globular nature of NOOSE SWEAT. Besides the aforementioned similarity, there is a fair amount of Spazz, Jenny Piccolo, In/Humanity and Crossed Out.
The 10 tracks fly by in a mere six minutes, with some songs barely reaching double digits before imploding. Opener "Manslaughter" is a bit misleading as it starts relatively slow in comparison to most other tracks, but its thickness and flashes of intensity eventually lead to a crushing close. "Thoughts and Prayers" and "Mentality" blow through with some seriously intense speed and dual vocals, while "Deplatformed", "Waste" and closer "Parasite" hit a different spot, I don't know what exactly, maybe it's the restraint amidst bouts of whirling chaos. But I can definitely tell you why "Complacent" kicks ass, that shit is mad heavy with some seriously bellowing screams. All in all, one helluva demo.
As mentioned, Tomb Tree just released these on tape via 20 opaque faceless red swirls in fluorescent pink/clear cases, 18 orange in fluorescent dual-tint cases and 17 show-only transparent red swirls (10 in dual-tint cases, 7 in swirled cases) with additional large-size 7x10 poster/lyrics. The band also has a show that I'll be attending tomorrow (Saturday August 14th, 2021) in Vancouver at Alf House with Con Artist, Body Rot and Cranial Sodomy, linked here. 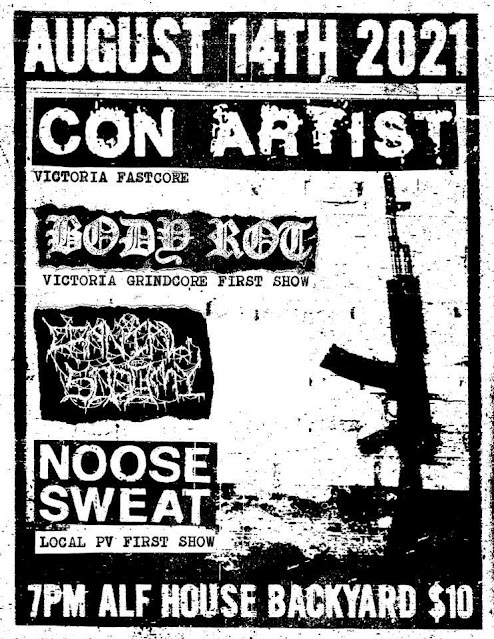 Review by: Amy Christine
January 12, 2020:
David Norman: Whenever you want to review something just lemme know. And if you don’t have the time don’t worry I won’t pester you <3
Me: Of course! Is there anything coming up we don’t know about yet?
David: Hawak is unreal. UNREAL.
Me: I looooove Hawak and would totally write something up about them.
What followed was David sending me a wetransfer of 10 mp3 files in a folder titled: “No sharsies, except with hubby”. What followed after that was my mind being blown. I told my ‘hubby’ Cory, “This is everything I’ve wanted in a screamo band. I don’t know how anything can really top this for me.” I became increasingly more excited for the Hawak versus Gillian Carter battle set at ZBR 2020. Twenty Twenty was looking to be a great year, and I hastily wrote a review.
Then, not 2.5 months later, our lives as we once knew them changed. This review has changed. Re-reading it was like peering into a world I no longer knew. A jumble of words trying to seem smart trying to dissect the instrumentation and feel of this album within a week. With a whole year’s worth of re-visiting, I now have a bit more insight. So here it is, the COVID cut of my review of Hawak’s first full-length album, nuóc.
I think what strikes me most about nuóc, is that the mood and atmosphere is cohesive and consistent throughout the whole album. It evokes feelings of isolation, anxiety, and anger in a more deep-rooted and heavy-hearted way than most screamo albums do, where the approach is often the frantic and cathartic expression of anxiety and anger. Both deliveries have their value – and I love them both – but it’s not often we get an introspective and heavy album. It’s a breath of fresh air and frankly rather needed as we all try to figure out our lives as things “return to normal”
In terms of song writing, the same could be said. The song writing is consistent throughout the whole album. The bass and guitar tones are rich, while cleans are warm without getting into the jangly territory. The two guitarists often play off each other, while the percussion and bass continue to drive the rhythm, so songs never feel like an unbalanced riff salad. Instead, each song feels like it belongs firmly to the album, and each song fits perfectly in place. It’s more of a… riff… cake? …
In my previous review I highlighted and described the feeling and instrumentation making up the songs I really liked, but upon reflection, I failed to adequately describe them. I will not reattempt because each song is dense with many layers to dissect. So, if you have not listened to this album already, take some time to listen to this album in full.
If you had to twist my arm, ‘burden sharing’ and ‘unseen’ are highlights for me. Both evoke feelings of isolation but where ‘burden sharing’ feels quiet and contemplative, ‘unseen’ feels more like an attempt to claw of that isolation. Incredibly reflective of 2020 and as we continue into 2021.
Nuóc is a wonderful first LP. Truly a feat of emotional depth, song writing, and instrumentation, and I’m excited to see how their sound progresses.
As a final note I’ll add, I think it’s rather telling that as folks in my circles share their favourite songs, they all happen to be completely different songs. So, one can only conclude that all songs are good. This album is good. You should buy it on vinyl. Case closed.
________________________________________
DISCOGRAPHY
2018 - Lift the Mist cassetteEP (stream/buy/download here)
2021 - 'nước' 12"LP (stream/buy/download here)
________________________________________
(2021) HAWAK - "disinter" (from 'nước')
https://youtu.be/QV0v7RSdiKo
(2021) HAWAK - "nước" (from 'nước')
https://www.youtube.com/watch?v=LkUdlGgx-Dg
(2021) HAWAK - "burden sharing" (from 'nước')
https://www.youtube.com/watch?v=8xNmf2OvJJc
________________________________________
HAWAK additional links
OMSB Podcast
'Lift the Mist' OMSB review 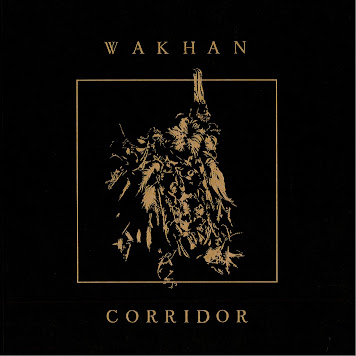 WAKHAN CORRIDOR came to my attention after members of Hedge Fund Trader started a new band. I had gone on a two-show stint with them during my short tenure in Swallows Nest and was a very big fan of the band and people, so when the offshoot band was announced I was stoked.
The debut, self-titled 'Wakhan Corridor' (2019) EP is pretty solid, bass-heavy, screamy hardcore. It's a decent start, but mostly I kept revisiting "For Long and In Loneliness" because fuck that thing gives me mad Foxmoulder vibes with that rumbling bass and snarled vocals. This initial release was taken off of bandcamp but I've linked it in the discography below if you'd like an mp3 download.
The following year (2020) WAKHAN CORRIDOR released a two-song EP 'II' that opens with "Diomedea", an absolute banger of a track that hits a fuzzy, dark, screamy outro at the one-minute mark. I enjoyed these two songs even more than the self-titled, as the general cohesion and screaming were really stepped up.
Just a few weeks back the re-released their debut self-titled EP 'Wakhan Corridor' (2021) with what sounds like entirely new mixing and mastering, and this is one of the best things I've heard all year. Opener "Face Turn" is vastly improved right from the get-go, and is vaguely reminiscent of the newest Crowning album (which means it's dark, multi-voxed, and awesome). "Carry", "Night of Cups", "Great Expectations" are really beefed up, with "Palimpsest" shining through with more dual vocals along with the epic closer and my favourite WAKHAN CORRIDOR jam "For Long and In Loneliness".
Despite the 2021 and 2018 releases being "the same songs", the EPs are quite different in terms of lasting value, as I've revisited this entire 2021 EP numerous times but only jammed the 2018 one twice.
________________________________________
DISCOGRAPHY
2018 - Wakhan Corridor cassetteEP (download here)
2020 - ii EP (stream/download/buy here)
2021 - Wakhan Corridor 7"EP (re-recorded) (stream/buy here)
________________________________________
(2021) WAKHAN CORRIDOR - "Palimpsest" (from 'Wakhan Corridor')
https://youtu.be/9AG_fa_2wrc