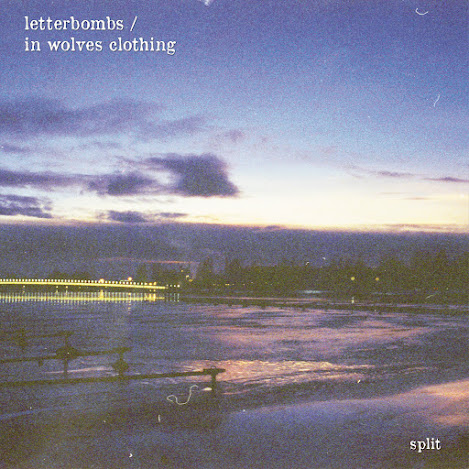 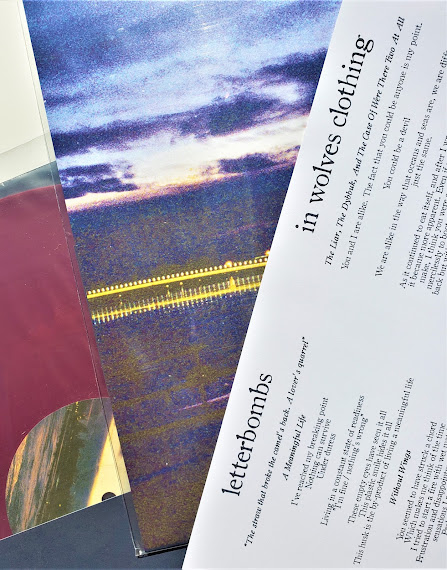 Jesse Mowery (In Wolves' Clothing) is my brother, and enthusiastic/supportive Chris Livingstone (Letterbombs) has released a few things on Tomb Tree so when asked if I wanted to release this thing it was a no-fuck-brainer. With the split 12" set to release in full digitally and physically on Saturday August 20th, 2022 I figured I'd give ya'll a sneak peak at this glorious split /100. Finland's LETTERBOMBS bring their five fastest and finest tracks yet, with Richmond, Virginia's IN WOLVES' CLOTHING clocking in at a minute longer despite having two less tracks, but no less passion. Take a jam and check back in at Zegema Beach Records and Dingleberry Records at 9am PST / 11am CST / 12pm EST on Aug. 20th!!!
(2022) IN WOLVES' CLOTHING "Split" (from 'Letterbombs split' 12")
https://youtu.be/b7h5mcWXIF0
These new songs are the last with Thom Carney who moved to a different city, so they are the last of that era and all rip. You've got two longer songs with a spicy but short third song sandwiched in between. Opener "Invisible Ink" creates a nice albeit eerie atmosphere that explodes with at least three vocalists screaming over one another, "Choiceless" has some gorgeous guitar riffs with desperate screams before it explodes and recedes by the 1:54 mark, and closer "Bleached" features some truly tortured screams delivered directly into a bowl of noodles that reaches a dangerous boil.
(2022) LETTERBOMBS "Split" (from 'In Wolves' Clothing split' 12")
https://youtu.be/VypuJKeQK74
This collection of songs are the band's crowning achievement up to this point, and contain a flow, consistency, and intensity that leave me even more satisfied that when I first heard their debut. Since that time they released a ton of material, but this...it's like 33rpm Raein played at 45rpm (wait...is that just emo-violence?) thanks to the off-kilter rhythms, dynamic shifts, and multiple screamers. "Folie à Deux" is a bit of an anomaly though, as it is longer in length, much more restrained, groovy, and includes their best singing so far. They're all great jams but I think the closer "Burnt Toast" is my favourite, as those lone guitar notes at the climax really submerge the listener.
Posted by Dave Norman at 23:04 No comments: 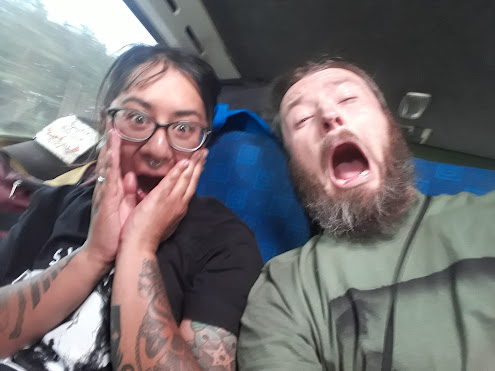 Lana and I go back to 2017 when I first moved to Dunedin (pronounced 'duh-NEE-din') New Zealand and was introduced through her partner Joerg and their band Yung Nat$. Joerg and I started Swallows Nest and right as I decided to move back to Canada Yung Nat$ called it a day. Naturally we asked Lana if she could take over on vocals for Swallows Nest. Bam. Then while on tour in Europe with Swallows Nest and Crowning she helped form Cuck, her newest and most abrasive endeavour to date. The band features Gabe and Joerg of Swallows Nest, Machina Rex, Sewage, and just released their 14-track self-titled debut. We talked a bit about this, as well as: Maori influence and upbringing, the racist anal sphincter of New Zealand, first song she learned on bass, hair metal crossover, adjusting to being in a band/touring, joining Swallows Nest, the end of Swallows Nest, the birth of Cuck, best tour moment, ruining Lana's tour posters, smelling your own underwear is totally normal, Aureole Of Ash influence, Lana's impressive tour voice, the Maori people getting fucked by the British and healing, liking avocados so much you don't buy a house, etc. Bands played in this podcast: Harris Hawk, Iron Maiden, Little Simz, and Soul Glo. Listen to podcast #96 which is available to stream and/or download for free via this link.
***Note: Te Kooti was NOT head of the Parihaka movement and the attempted assassination of the queen happened in 1981.
order tapes from Tomb Tree 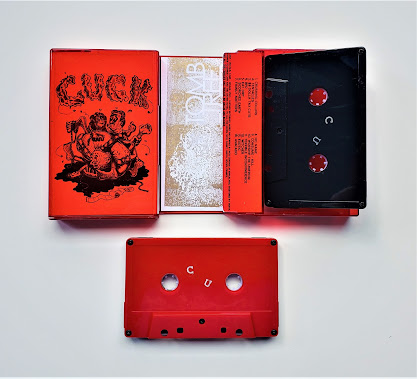 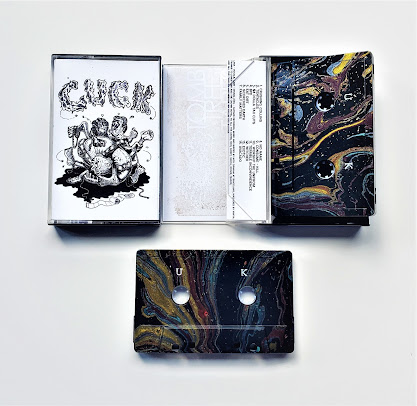 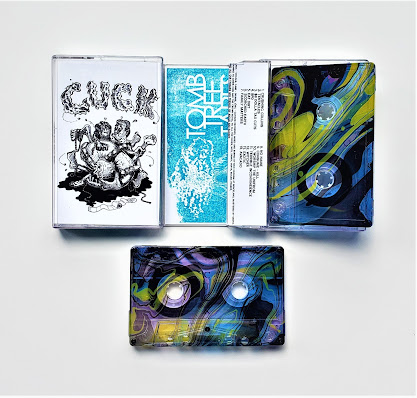 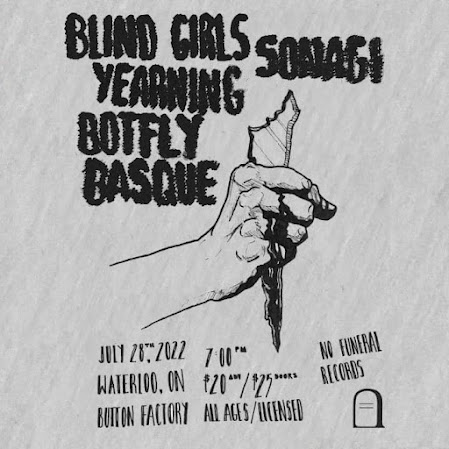 First up, these videos are pretty freaking sweet. The amount of light in such a large space with great sound and a legendary line-up is a recipe for screamo scrumptiousness. Lots of notes below with the band reviews and videos. A few quick notes.

3) Odd Burger is the best vegan fast-food joint around.

Video got a different feel? Well that's cuz I noticed that I had forgotten my trusty video camera in another bag. So I went out to the car to get it. After I got it...I uhhhhh...put it back in the bag in the car. So once back inside Basque had just started their last song and all I had was my cellphone. Too much backstory? Ah well. So the band was even better than the night before, I could see them all, and Ali's mic was audible this time. Wait...there's more backstory.

After the Hamilton show one of the Basque members tested positive for covid and the remaining three house members had a conversation that pretty much ended in them doing an improv noise set and dropping off New Friends Fest. After Sammy from YEARNING heard this, the hero of the tour stepped up told the band to teach him the songs, despite their best efforts to explain that the weird flow and mathy bits would be too awkward to learn in such a short amount of time, he persisted. I walked past the practice room 20 minutes after Ali and him had started and I had a huge smile, so I went outside and told Nate and Jake that the set would be fine and they should probably okay New Friends Fest. They waited until after this show to confirm, but it was a no brainer, with the one exception that everyone was definitely bummed that Niko couldn't play the fest.

SONAGI
FFO: To Be Gentle, Closer

This Philly band showed up and the first person I met in the band was my old bud Eric Mauro. He told me that he had recently joined on second guitar and became even more stoked about the set. And when they started? Good lord what a sweet sound. Super lush, heavy when it needed to be, and just all-around I got made Level Plane Records vibes which is still something sorely lacking in today's screamo, in my opinion. I told bassist Mike this at New Friends Fest and we bonded instantly. The other members were super kind and their shirts were awesome. Def see this band, they are incredible.

This Quebec band blew the top off of the emo-violence community (assuming their is one) earlier this year with their debut EP and showed us immediately that they can pull it all off live like it was nothing. Despite having vocalist issues (aka their vocalist didn't make the tour) they picked up Nate from Basque to let out some throat-shredding screams and by golly did he deliver. I filmed the entire set and it was absolute bliss...and destruction.

I thought this set was the bee's knees, folks. Great sound, awesome lighting, and five individuals just tearin' shit up. You can hear the crowd get noticeably more excited as the set progresses. Although after the first or second song you can hear some minds being blown with repeated phrases such as "What the fuck!?!?! What the fuck!?!?!". I also asked the band the night before if I could get in close and circle around them, to which they agreed, and I'm hella happy we did it cuz we captured some great shots!!!

I'd had Keegan on the podcast (linked here) and I've spun my nebula 12" a good six times, but I still wasn't prepared for the ear-bashing I'd receive, and thank them kindly for it. A heavy dose of noise rock and southern metal with the occasional (and excellent) clean singing and general Breather Resist and Botch-ed ness. 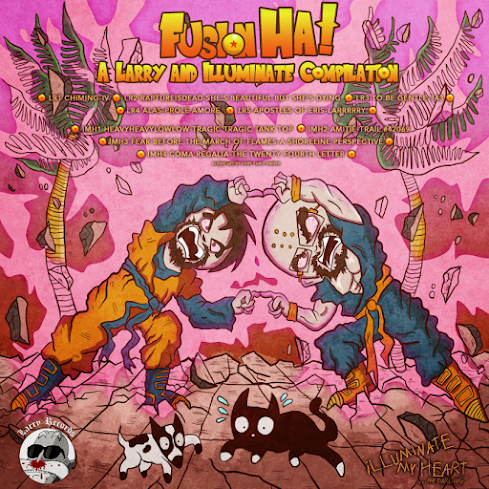 Larry Records
Illuminate My Heart Records
One Dying Wish
What the hell is this? Well it's the official announcement of the upcoming August 8th release of this smashing 7" collaboration compilation titled 'Fusion, Ha!' between Larry Records (a-side bands) and Illuminate My Heart Records (b-side bands). All tracks are new to vinyl and most are exclusive, with a limited pressing of 250 copies. with art by Curly Swope. $9USD on August 8th at 9am PST / 11am CST / 12pm EST. Please note the misprint, as Alas is not on this, it's One Dying Wish (y'know, the song we're premiering?) 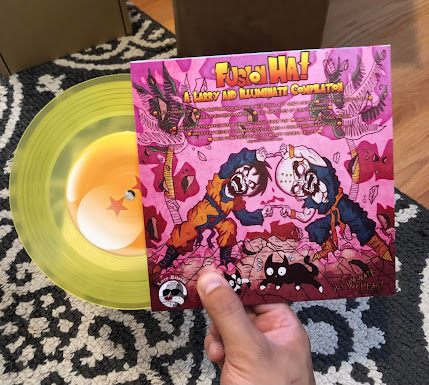 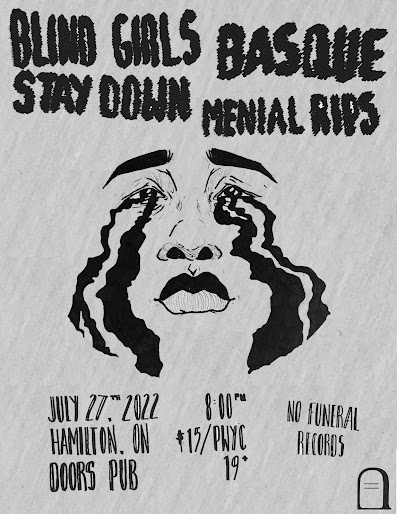 Holy crap-o-la, it's finally show review time! The next three days will have posts from the three shows I was able to attend before testing positive for covid on Saturday morning (boooooo) but since I really haven't felt too bad, just sad and isolated with a full garbage bin of mucus-filled tissues (mmmmmmm).

Enough about me. This show was absolute ace. A few key points to note before heading into the band-by-band review w/videos.

1) This Doors Pub set was the second-hottest show in the band's 9-year existence...and they're from fucking Australia!!!

2) I walked Julian, Ben, and Luke around Hamilton and showed them a few places and uhhhhhh Hamilton-esque things.

3) I took Ben to the Peach Rings where he had a two-hour nap on the picnic table, followed by arm-wrestling and planking.

This ambient/noise duo used a plethora of instruments and pedals to create one of the most unique experiences I've had so far. I loved the guitar/bow/pedal combo and how they used a cassette player on top of said guitar. Super eerie. Super fucking cool.

Led by the No Funeral Records house of Nate, Ali, and Jake (and Jackson rules <3) with local friend Niko on bass, this new, ex-Karloff band did an incredible job of jumping back and forth between calm, serene, noise moments and absolute shrieky chaos. There's a second video of their best track below, but you can also catch that jam from the upcoming New Friends Fest 2022 Day 1 post that is upcoming.

How long have I been waiting to see Australia's BLIND GIRLS? Let's take a look, shall we? Oh, here we go. Linked here is my first discography review almost 7.5 years ago when they only had two releases (a full three years before 'Residue' dropped). I was lucky enough to travel to the Gold Coast in 2017 when I met and hung out with a few members of the band, so seeing half the band again and meeting the other half was a bucket list box for me. And then...the set. Good fucking lord. This band fucking owns live. Lotta movement, vocalists, chaos, noise - but it's all held together super tight. The PA wasn't the best, but I did my best to boost Sharni's vocals during the set as it progressed.

Closing at STAY DOWN was another local Hamilton band that I was not aware of, and my good friend Luther was the vocalist! You might remember them from sick bands reviewed in the past Sketchbooks and Wimp City, and they were the subject of OMSB Podcast #18 which I've linked here. This band is much more noise rock driven with heaving hardcore and post-punk vibes. The instrumentals swing through a myriad of genres including blues, punk, metal, and metallic hardcore while the vocals are generally drowning in echo/reverb.