NULAJEDNANULANULA is a band from Prague and they released an incredible LP last year of crusty, violent and epic screamo/hardcore titled 'mit Liebe aus Sudeten'. I'll be revisiting this in my best of 2018 list, methinks, but here I'll go through the discography in more detail.

NULAJEDNANULANULA first released a 'Demo' way back in 2014, a full four years before their next endeavor. It's a four-track EP with a few songs that were rerecorded for the LP and one exclusive song. Opener "Raikkonen se zlatou hvězdou na čele" shows almost exactly what the LP will sound like, complete with dueling vocals and a killer closing riff. Also from the LP, "Pravděpodobnost výskytu" is next and has a stellar first few sections that lead to some less refined parts that were smoothed out for the finalized version. "Mono" is next and provides another excellent look into the band's future, as this track is a mere 1:21 of chaos followed by epic post-hardcore/screamo. Closer "Trnová cenzura" is the only track not rerecorded for 'mit Liebe aus Sudeten', and it's a pity as it is a very good tune. Without a doubt the most jarring and disjointed song here, things get nuts from the get-go and by the 30-second mark we're swaying along to a lone, broken but beautiful guitar progression that eventually dissolves into looped feedback. A very good demo, says I. 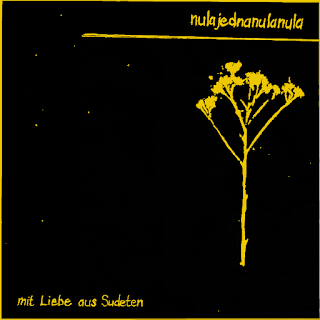 Speaking of good, 'mit Liebe aus Sudeten' is not that. It's fucking awesome. You can tell they spent a few years tinkering with their songs in between releases, as the polished and complete feel is obvious. Opening with an instrumental intro that Gantz fans will likely take to, as "Svoboda smrti" follows floating guitar notes and a few basic keyboard notes to construct a wonderfully engaging and chill first look at the LP, despite its very different approach and sound when compared to the subsequent 8 songs. Showing up again but with a much stronger rendition is "Pravděpodobnost výskytu", the 5:40 epic jam that reminds me of early Rutka Laskier in the way it molds destruction and melody into a concoction that goes down like water. After an initial slap in the face, the song recedes and hooks into a massive guitar riff that carries the track to its atmospheric midsection which goes nebula at 3:10, with the ultimate climax throttling the listener at 3:51 with an apolyptic ending that is probably my favourite minute of the entire release. "Nagano, 1998" is another excellent track that contains none of the restraint of the preceding song, as it rips through 3:32 of abrasive, seething and violent hardcore. There are some deceptive jazz injections that manage to take root by 1:35 and entangle themselves to the band's sound, leading the epic Fall Of Efrafa-esque close. My other quintessential jam on this LP is "Räikkönen, se zlatou hvězdou na čele" is short but packs a ridiculous punch with excellent dual-vocal work and a beast of a riff. The rest of the LP continues along the same lines but I find myself coming back to tracks one to four on the regular, and my four-and-a-half year-old son has heard them enough to properly say NULAJEDNANULANULA. "Bejt někdo druhej, někdo třetí" is rooted much more in post-hardcore than blackened screamo, while the title track "Mit Liebe aus Sudeten" is short and prickly to the touch, but again they layer this gloss of epic and driving screamo over the madness, giving it a fantastic sheen. The vocal range in "Černá nemůže bez rudé být" is excellent, as is the rest of the song, especially the climax from 1:40 onward. "Mono" shows up again and kicks serious ass in just 1:21 while closer "Z vůle k moci" paints a lovely, sprawling canvas a whopping 9:11 in length.

I don't know what the band has planned next but I'm beyond keen. Also, NULAJEDNANULANULA does a pay what you want for cassettes and cds by emailing the band at 0100pride@gmail.com