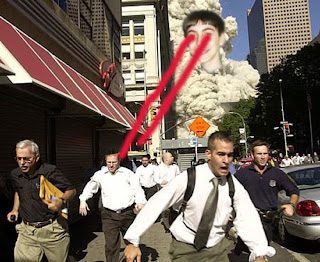 Every now and then I review a band and have trouble thinking of bands to stick in that "for fans of" section up there. My entry into false grind was only official as of this year, as I never even knew what the term meant. Although I have jammed The Great Redneck Hope, Ed Gein, Daughters and Clancy Six for more than a decade, my further education came when I asked some friends to help me find decent comparisons for bands such as Harlots and Robinson at about the same time that Connie from SeeYouSpaceCowboy and Chris from .gif from god brought them up as an influence for their bands. I found the HAYWORTH bandcamp and grabbed everything I could and but a mere week or two later someone posted that 2007 living room jam video of "new hayworth material". I watched this video too many times, simultaneously kicking myself for not finding the band earlier (I was over a decade late from their inception) as well as having my mind blown to pieces at the age-to-technicality inverted correlation. Oh...and they started as a fucking three-piece. It boggles the mind. It truly does.

Honestly, before continuing this review, sit back for 10 minutes and have your brain shattered. Just promise me to wait until at least 2:15, and if you aren't sold by then don't even bother with the rest of this review.

If you are wondering what the band sounds like, because you didn't watch that video like a chump-face, they play a volatile, frenzied, chaotic, abrasive and breakdown-soaked false grind, math-metal and emo-violence triad. If you'd like band comparisons, I very good mash-up in terms of sound would be Destroyer Destroyer meets Me And Him Call It Us. The first in the instrumental side, coupled with a mixture of shrieks and barks, and the second in their ability to create a song so violent and unstable that it can actually sound like the audio of multiple people burning alive. If you're a little confused as to what the hell I'm talking about, I urge you to jam "Innocent Bystanders Watched in Horror as Peter Jennings Drew His Murder Weapon" by Me And Him Call It Us and "Elder Body" by Meth.. The song titles are generally long and outrageous, while the tunage is short and...well, also outrageous.

As you may already know, I don't fuck around when it comes to discographies, so I've scoured the internet and found an entire release not on the HAYWORTH bandcamp page, as well as different versions of all of their 2008 and 2009 material that includes additional tracks. The only thing I didn't bother compiling (or paying for) was 'The Vader' live LP because it's $8 and doesn't sound very good.

"The Industrial Park" was the band's first release, and it's just a digital demo, but jesus fucking christ I bet people were shitting all over the house when they first laid ears on this. That breakdown halfway through is one of the most deafening things I've ever heard and is well worth your time. If you want to see it live check out the first song in the jam video linked above.

I don't know what the deal is, but HAYWORTH has all their releases up on bandcamp except the crucial first EP from 2007 titled 'License to Bill'. Seriously this shit is amazing and should be up, so I've included it in the full discography download. The stellar "License to Bill" shows up again and is just as devastating as the demo, if not more so. When "The Theme Music To The Revealing Of Wilsons Chin" begins you might think you're listening to Daughters or Ed Gein, but once that first metal breakdown hits at 30 seconds you might be thinking that you've accidentally played a Owen Hart track, cuz goddamn those are some seriously sinister growls. And then...holy shit, just after the two-minute mark everything stops and we hear, "Are you fucking kidding me? Pssht, nah." and then one of the mightiest breakdowns ever ensues. Good god I'm dead. "Dog Water" dips into some emo-violence with the first half, albeit a very metallic hardcore version of it. "Hashslinging Slasher" is one of the most straightforward HAYWORTH songs and includes a very chill, jazz/lounge midsection that is bookended by two fantastic, hyperactive screamfests. And then there's "The Mauve Avenger", an absolute mindfuck that includes jarring electronic samples amidst the destruction, as well as some of the best bass slides I've ever heard in conjunction with behemoth breakdowns.

The following year they released 'Don't worry about it, I'm not worrying about it', a great follow up EP that includes what is arguably the greatest HAYWORTH song ever recorded aka "The dog walked itself home ate a pizza and took a nap". The first breakdown hits hard 26 seconds with the repeated shrieks of "196 degrees, it's not a fever!" and then slides into some light and breezy jazz wankery before coming back at it at 1:28. At 1:34 the songs shifts into kill mode and billds to an utterly inconceivable breakdown that might go down as the best end to any song ever. The guitars in "Late Night, One Night In The Ghetto, My Man Got Shot In His Ear Like 8 Times" sound a hell of a lot like Oktober Skyline to me, as do those throaty growls. The final song "Pizza Clock" is another noteworthy track, as it screams its way through the first half and then breaks down into subatomic particles by use of gargantuan chugs and banshee death cries.

HAYWORTH's first full length LP is titled 'I hope the thunder and lightning kill you' and houses 10 slaps to the cerebellum, beginning with the opening track "Bad Dudes", which is just a clusterfuck of awesomeness with a traditional climax right at the end that'll knock your socks off. "Zibiza Lame-O" is another short shock to the system that causes long term damage, especially to the vocal chords come 43 seconds. "The Friangles Go With the Friangles" is perhaps the quirkiest HAYWORTH song, for that jazzy section at 1:23 is quite humourous. "Squirrels Were Running Around Homeless From The Death From The Sky" has a strong resemblance to The Locust and An Albatross due to those wacky synths. "Bun Guy" and "My Leg Got Bit Off By a Shark" wreak absolute havoc, are two of my personal favourites and give a solid indication of the heaviness to expect with their 2009 LP, with the latter beginning like mid-90s Converge but the breakdown at 1:30 is reminiscent of Me And Him Call It Us. "Industrial Park" makes yet another appearance with yet another recording and, you guessed it, improve upon it yet again...although one might argue that the explosive breakdown at 53 seconds takes a hit with such good production, and almost loses the "holy shit my speakers just fucking broke" sound. Almost.

'INPYFAD' was initially titled 'I Now Pronounce You Fucked and Depressed', and the version I have included in the discography download includes 13 jams, not the 11 on the HAYWORTH bandcamp. This is the final recorded material by the band and at this point (2009) everything had been sharpened to the point of inducing spraying blood from the ears should you hear a mere few seconds. The vocals have the perfect screams, whether it be high or low, and the instrumentals are tighter than ever with the best production that the band landed. I mean, the ending of "15 Seconds Alone in the Hot Tub" is devastating, "That Ain't Lake Minetonka" houses a plethora of breakdowns, "Fuck Church" annihilates for its 2:24 entirety, much of "Domestic Violence Rules" will leave your body rather pulpy, "Middle Aged Couple Engaged In Consensual Missionary Style Sexual Intercourse, With the Lights on For Procreation Purposes Only" is a righteous display of extremo-violence (ha), "I Don't Want To Be a Ninja Anymore" manages to blend the overtly heavy with a sassy, dancey vibe, "Boy With a Goat Head Thats Just Trying to Fit In, But He Has a Goat Head So Its Not Really Working Out" is the most deathly as well as intricately timed and that closer, good lord, "The Municipal Incinerator" is one epic sonuvabitch. There's so much to love about this record, just like the entire HAYWORTH discography.

If anyone from the band ever reads this and decides, "hmmm...yeah, discography" please hit me up at zegemabeachrecords@gmail.com and we'll give this material the vinyl treatment it deserves.