REVERIES are a relatively new band that released their debut LP last year (that's 2018 as of this year) and I became aware of because they share members with Lessener, a band that I've had the pleasure of playing with, releasing a record and hosting them for ZBR Fest 2017. Although I cannot say the first two things of REVERIES, I can let it be known that they will be attending/playing Zegema Beach Records Fest 2019 in Vancouver (May 31-June 2) along with previously mentioned Nuvolascura.

The band blends a few genres together, including hardcore, emo and screamo (predominantly) that riff off of each other creating both a haunting and gorgeous atmosphere. After two driving screamo tunes in the vein of On The Might Of Princes and Shirokuma ("Growing Older" and "A Modern Invasion") "A Thousand Suns" slows things down a bit and even includes some singing. Their bandcamp references if Waxwing were screamo and I think that's really accurate, especially with the instrumentals. "Rainwater Drowning" is my favourite of the nine jams as when 3:20 hits, the slow motion death sequence close is riveting, and I often find my myself singing, "Dreading the treading, watching water levels rise. I've been fearing the dive, knowing that I won't survive," hours after leaving my computer. "Firelight" is quite jarring and disjointed at first, making it pretty dang screamo, the midsection utilizes large builds and collapses like a landslide into a fantastic groove that the song locks into and fades with. "An Undelivered Letter" gives me some late-era Funeral Diner vibes but sometimes the emotion of the vocals are lost in what seem to be forced rhyme schemes. The opening of the very next song puts the vocals/lyrics back in sync and creates a very uncomfortable yet inescapable mood that climaxes at 1:20 with throat-shredding screams. "Undergrowth" is, strangely enough due to the title, quite an airy, chill and positive sounding tune, with closer "Fall Failings" being a lengthy 4:44 of organic, atmospheric, post-rock/post-hardcore that evolves into a sprawling, shape-shifting, multi-headed beast of screamy hardcore.

Will Killingsworth did a very good job on this recording as everything is crisp and sounds very well produced. I feel like the cleanliness of it all it exactly what the band needed, despite being known for gritty, noisy and cathartic music.

At some point this year REVERIES will be a part of a three band split alongside Chalk Hands and Okänt, so be on the lookout for that! Speaking of being on the lookout, there's a bigass interview under the discography and youtube embeds so get reading. 💝 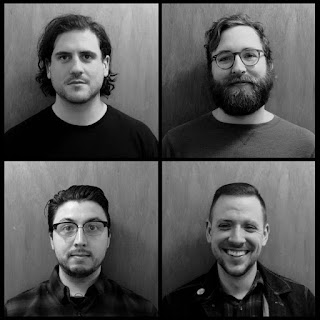 Okay so first things first, how the shit was Reveries formed, and why the name?
Reveries is a band that was started with the premise of patience. Pete and Joe were living together in Lowell MA and were both newly band-less. They had played in a 2-piece band together in the past and wanted to continue that songwriting dynamic, and Pete was having some screamo inspirations. We had a couple different friends play bass as we worked through some song frameworks and coincidentally, Jake came through to try out some vocals before filling the job as our bassist. Mike and Pete had known each other from touring in former hardcore bands years back, and funny enough ran into each other in the hallway of our practice space and struck up a conversation which led to Mike becoming the vocalist. Some of our first jams happened in 2015/16 and we were deliberate in our writing and playing but it’s always been worth the wait for us. We’re also lucky to all be on the same musical wavelength and bring different influences to the table.

It did also take us a long time to find a name. We probably had 5 songs written before we settled on it. We wanted something simple but natural with just the right amount of “meaning”. We all sort of identify with this concept of daydreaming and allowing our minds to wander along in our day so it made sense. Pete also low key was hoping for a subtle music reference for the music nerd in him, and Debussy's “Reverie” fit this criteria.


What bands in particular have influenced Reveries, regardless of whether the sound shows up in your music?
Pete: Our self titled was written over the course of a few years, and some specific influences can be found in certain areas, but one constant influence has been On The Might Of Princes - in particular their 'Sirens' full length. This is definitely going to turn into a dissertation on how amazing that album is, but sorry not sorry. 'Where You Are and Where You Want To Be' is what most will point to as their favorite material by the band, but as least for me, 'Sirens' is a top 3 emo/screamo album and probably a top 5 all time. A critical listen of 'Sirens' will reveal incredible and subtle songwriting and compositional moments that give you those music chills every time you listen. The vocal delivery and lyrics speak for themselves, the bass writing and tone is absolutely top tier, as is the guitar (there's something extra special about the bass though), and the drumming is perfect. There's a great atmosphere to the recording and it's just well-produced enough.

Paired with that main influence is mostly European screamo, and some bands from our side of the pond, generally of the more melodic variety. Daitro, La Quiete, Raein, Amanda Woodward, and Suis La Lune's 'Heir' EP, were always on heavy rotation, and we drew influence from newer bands too like Shirokuma, Shizune. Jake and I used to joke - if you speak a romance language, your screamo band is probably awesome.

On the American side of things, sounds from 'Cryonics' and even 'Risk Revival' found their way into our writing, Kidcrash was staple listening material as was Gospel. I was introduced to Massa Nera at Zegema Beach fest a couple years ago and was blown away by them and subsequently everything they've written - some our newer material is influenced by them! Furthermore from a drumming perspective, Capsule and The Cabs were a big influence on Joe.


What was it like recording with Will Killingsworth at Dead Air Studios?
It took us almost no discussion to decide to record our full length with Will at Dead Air, and it was definitely the best experience any of us have ever had recording with any band. Will’s reputation speaks for itself but I can’t help but continue to pump it up! He was a huge part of bringing our music to life, not only capturing our sound exactly as it was in our heads, but truly being a “producer” – we felt like he was as invested in making the record sound great as we were - this might seem like an obvious trait that most engineers have but I’m not sure it is. We’re big believers that developing your “sound” as a band is one of the most important things you can do, and thanks to Will we think we have a great start.


How did you hook up with Ancient Injury Records? And how did Emocat become involved with tapes?
We first posted some self recorded not-so-great demos online a year or so ago, on Reddit funnily enough. Miggy (Emocat) found us there and sent us a message offering to put out the tape, which was super cool! Emocat is a great label full of awesome releases, everyone should go buy a tape from him now. It meant a lot to us that he was willing to take the plunge on a band that no one had heard of, with no real hype, he just liked the music - and that’s exactly why we do what we do. He's the best.

Jake: I’ve always been a fan of what Joe and Pete have come up with together over the years. When the first few songs for this project started taking form, I knew I had to be a part of the release with Ancient Injury. It was really exciting to work on the physical presentation and packaging with the guys, and we are all really happy with how Solid MFG brought it to life.


How have your tours been?
We haven’t toured yet haha, but we did play our record release show in a grimy Boston basement with Lytic and Shizune, and it was basically a screamo wet dream in real life, especially since Shizune was such a huge influence on the record and Lytic of course is connected to screamo royalty.


What is next for Reveries?
We have a 3-way split coming out later this year that we are super excited about with a couple of really killer bands from across the pond, Chalk Hands and Okant. We also have a bunch of other new music in the pipeline and plan on releasing an EP shortly after the split! Plus, this summer we’ll be making the trek out to Zegema Beach Fest in Vancouver which a huge honor!


Any thoughts on staying positive and enacting change in these times of drastic decline?
Joe: We like to think that writing and playing this music together helps us to stay positive. This band is an outlet for all of us and we intend to keep using it to set free the angst that can bottle up during these times. We hope that everyone can find an outlet that can provide the release that playing music does for us. There may be many negative things going on in the world but technology has helped to give more people an artistic voice and this is a constant improvement in our eyes.

Mike: As far as staying positive, Finding an outlet is so important. Whether that’s playing music, Freewriting, going to the gym, hiking, even just riding a bike…Anything to help release those pent-up emotions that can weigh you down. Enacting change however, is a bit more of a challenge. You can pour your heart and soul into political debates/protesting to prove that your beliefs are strong and valid, but venting on social media is not casting a vote, and is not making a change. The internet can be toxic for that reason. We get to filter out what we don’t want to see and blind ourselves from the real world around us. Surrounding yourself in reality where you get to hear the opinions of all cultures and lifestyles is crucial. Use that exposure to form your own opinions on how your world should be, and fight for those changes to make it happen.
Posted by Dave Norman at 09:02