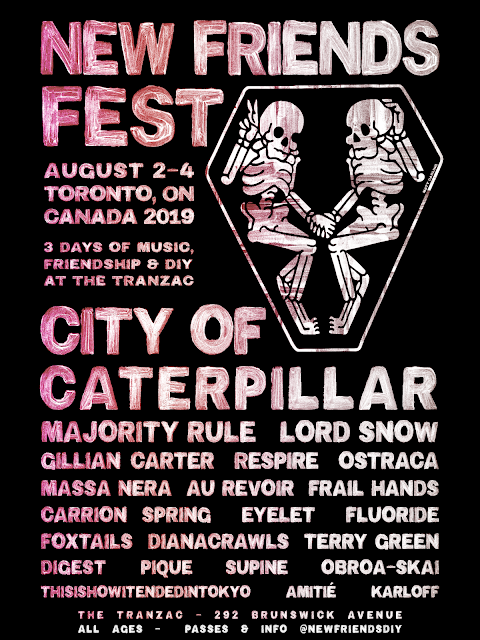 Whilst visiting family in Ontario I made sure to include trips to New Friends Fest in order to see my other family. The love and community I witnessed in the first two days of NFF (I had to fly back the morning of the third) were staggering. I literally wasn't even able to say hello to everyone I wanted to, let alone have conversations. That's a truly amazing thing. The people and bands were all stellar, and the most heartfelt props to Vanessa, Egin and Rohan for pulling off such a wonderful festival. I was able to take videos of most bands during those first two days, so without further adieu here are one to two videos by each band!

KARLOFF
I've been waiting two years to finally see my friends' band, and holy fuck they did not disappoint. Simply put, they were maniacal and most people seemed to eat it right up. Truly an exhausting and cathartic live show. Members run No Funeral.

AMITIÉ
Formerly Tall Ship Set Sail, this four-piece plays an excellent blend of emo and screamo, and I dare say they fall into the former sphere first. Featuring Matt of Worst Days, they've already played Miss The Stars and now this, and have an incredible 4-way split 12" coming out soon on Zegema Beach!


DIGEST
Featuring many ex-members of La Luna but sounding almost nothing alike was DIGEST. Vanessa from New Friends does vocals and holy bujesus that's some seriously heavy shit.


FLUORIDE
The Philly band was easily one of the bands I was most stoked on and they did not disappoint in the slightest. In fact, they were perhaps my favourite set of the first night. I was kinda nervous around them and just kept saying stupid things like, "Hey, who's that? It's the best set of the night!" and "I'd love to release your tapes in Canada!", etc. I nabbed two 12"s for the ZBR distros and have tossed one up in the Canada store here and one in the U.S. store here.

MASSA NERA
This band continues to impress more and more every time I see them. Playing two new jams, I was flabbergasted at the new material. It is heeeeeaaaavvvvvy. You are not ready...and neither am I!

For fans of: Gillian Carter and Off Minor
Bandcamp
Facebook
Link to additional video

FRAIL HANDS
Coming in from the East side of Canada was FRAIL HANDS who somehow found a drummer a month prior to fill-in and play all the songs...which was a feat and a half considering the complexity of these jams. Amazing set. Amazing band.

For fans of: Rayleigh and Blinds Girls
Bandcamp
Facebook
Link to additional video

GILLIAN CARTER
I think I can officially say that Logan from GC knows what the audience members want more than anyone in the screamo game, as he is truly an entertainer on top of being an excellent guitarist/vocalist. Their set had songs from numerous releases but those new jams sounded fucking amazing live, and that new drummer was awesome.

PIQUE
This was the band's final show with Keon (drums) and the opening act did a great job of keeping it light and still kicking ass. Their banter was generally humorous and the triple vox is always warranted in my book. "Eric" (if that is your real name) runs Larry Records.

THISISHOWITENDEDINTOKYO
This five-piece was an all-out scream-fest that reminded me of a twinkly, loose, upbeat Kodan Armada.

DIANACRAWLS
I'd been waiting for quite some time to finally see this band and good god they did not disappoint. Actually, they put on one of the most riveting and interactive performances of the first two days. Sassy, jammy, Primus-influenced, glam screamo from Montreal/ex-member of Commuovere.

SUPINE
I only caught the last song by this band, as I was outside chatting with friends around the corner and didn't notice that they started. I'm fucking bummed because I really liked their most recent EP and the last song I saw live was unreal.

FOXTAILS
I'd heard great things about this band and it's no wonder after witnessing their live performance. Quirky, sassy, screamy and very melodic.

OSTRACA
Playing one of the best sets I've seen from them was Richmond's OSTRACA, and the three-piece played songs from every release including a new song. Their presence was commanding as usual and the vocals were mixed perfectly, allowing us to be cognizant of whether we were being torn apart by Gus' shrieks or sentenced to hell by the growls.

RESPIRE
After seeing the Toronto band fly under the radar for a few years (playing killer basement shows, coming to play stupid Hamilton, etc.) it was electric to see them after they've started getting the recognition that they deserve. I had never seen any of the new songs live and holy smokes do they sound incredible live!

CITY OF CATERPILLAR
I only caught the first half of the set before booking it home (I needed to wake up a few hours later to drive my family to the airport and fly back to Nanaimo) but what I saw was mesmerizing. Sounding very much like their recordings of nearly 20 years ago, CITY OF CATERPILLAR played their songs with excellent precision and the bassist's screams always tug at my heart strings.

(2019) CITY OF CATERPILLAR "A Heart Filled Reaction To Dissatisfaction" (from 'City of Caterpillar') @New Friends Fest
For fans of: ...Who Calls So Loud and Massa Nera