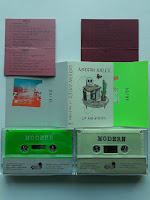 I have already recounted to story a few times, but long story short I got hella obsessed with MODERN RIFLES back in 2010 upon my return from South Korea. When I started this blog in 2013 MODERN RIFLES were one of my first posts, but it was short as I was still figuring out how to write these posts. Fast forward to 2018 and the bassist Daryl emails me with three unreleased tracks from their only recording session, which I quickly ask if I can release along with the LP 'I Was Young, It Was Dark' on cassette. He asked the band (who were long since disbanded) and got back to me with new art from Greg Rozum and the masters. In January of 2019 we released the tape along with the unreleased tracks in this bigass post that I did. Go to the Zegema Beach Records bandcamp page to listen, donate, or download the 14-track album. Links to buy the tapes in both Canada and the U.S. are below:

Today I'm back again to gush all over MODERN RIFLES, but do so in an exclusive interview with bassist Daryl Thompson. I've had questions brewing in my intestinal tract for nearly a decade so these questions were half screamed at Daryl in excitement. I hope you enjoy learning more about this relatively obscure rock/emo/post-hardcore band from San Diego. A million thanks to Daryl for taking the time to send me those tracks last year, believing in me enough to release and premiere them, as well as combing his brain to search for answers to questions that should have been asked long ago.

How did Modern Rifles form?
Modern Rifles started with Dan and Jonny (guitars) posting a Craig’s list ad in San Diego. I responded and they tried me out. It worked out for me because I was wearing a Les Savy Fav t-shirt. Then we tried out lots of drummers until we found Garb who had recently moved to SD from Pittsburgh. We hit it off right away because we listened to a lot of the same bands, and he played with dudes from bands like Don Caballero, etc. He is one of those guys who just beats the crap out of the drums, but can still get really technical if he wants to. We all were from different places in the U.S.  Dan is from Louisiana, Jonny is from San Diego, Garb is from Pittsburgh, and I’m from North Carolina. Crazy to think that people from those very distinct areas could have lots of the same influences.

What were these collective influences you speak of?
We were into all kinds of stuff...some of these bands I’m only speaking for myself, but most of them we all liked. The Jesus Lizard, Don Cab, Unwound, No Knife, Sunny Day Real Estate, Engine Down, Converge, Russian Circles, These Arms Are Snakes, Hot Snakes, Drive Like Jehu, Polvo, Archers Of Loaf, Superchunk. I mean, that list could go on forever. I left out a ton.

What bands did y'all play in beforehand?
I can’t remember the bands that Jon and Dan played in but they weren’t in them for very long. Garb played in a bunch of cool Pittsburgh bands like Jumbo and Teddy Duchamp’s Army. I was forced to play in my dad’s terrible cover band in my teens and later tried to form a two piece Godheadsilo/Unwound cover band with my friend Greg Rozum who did the art for the cassette you put out. We had one show booked at the local pizza place. It was fortunately canceled.

What was the first song you wrote together?
Hmm.  I think it was “Illegal Dracula.”

Did writing come easy? Did the band have a favourite song to play live?
Writing came easy as far as coming up with new song ideas, but it took us a long time to piece things together which was probably why we finally broke up. We have almost a whole album of demos that we never finished.

Did you have a primary songwriter or were all of you bringing material to the table?
It was a pretty collaborative effort. Sometimes the guys would come in with a guitar riff or I would have a bass riff and we would develop the songs around that. I think playing a lot of shows also slowed up the process because we would mostly practice the set and we didn’t have a ton of time for extra rehearsals because of our work schedules. We actually reunited for a short period but just couldn’t get enough time in to finish songs.

How many shows did you play (appx.)? Did you do any touring outside of your city?
We didn’t do any touring really. We played some one-off shows in Pittsburgh and some up the CA coast. It was something we always wanted to do but our work schedules were too messed up to make it happen. I think the jam we liked to play most was “Feck Me if I’m Wrong, but is that a Ham Sangie in your hands?”  People really dug that one. The name of the song is very Pennsylvania if I remember correctly. I’m not sure how many shows we played. Maybe around 75-100? I have no idea!

And I noticed three people are credited with vocals, were songs shared or are they doing backups or what? I always thought the vocals were top fucking notch.
The lead vocalist was Dan Deaton, and the others were backup vocals including the drummer. I actually sang some backups live, too, but I’m kind of shy so I didn’t sing on the album besides maybe some gang vocals.

When was the band's lifespan?
I believe we started in 2005 and broke up in 2009.  Reunited for a show in Pittsburgh in 2010, and started playing again probably from 2011-2014. I’m really foggy on those dates, but either way, we should probably have more than one album!

Do you think more songs will ever see the light of day?
No. Probably not. The demo was very sloppy, and there were no vocals recorded on it. We all play in different bands now, and we can barely even keep up with that because of work, family, etc.

Who released your cd?
We released it ourselves. I don’t think any label was interested because of our lack of touring.

Why weren't these three songs on the original release?
I really don’t know why these songs weren’t on there. I think we were having trouble with getting lyrics together on a deadline so they were finished a little last minute.

What's your favourite Modern Rifles song?
A 3-way tie between Kip Winger, Feck Me, and Say A Prayer To Saint Happenin’.

What "for fans of" bands could you recommend for Modern Rifles?
Cursive, No Knife, Boilermaker, Drive Like Jehu, Unwound, Russian Circles, Shiner? Shit, that’s a tough one!

What are you doing nowadays?
Garb (drummer) and myself (bass) play in 2 bands together. One is a parody band called Shades McCool which is a project started by Tony Gidlund from the band, Fever Sleeves. We just finished recording our first LP with Ben Moore who recorded all of the Hot Snakes albums. Should be released this year. The other band is brand new and we don’t have a name yet.

What is it like looking back on the band now, in 2019?
It’s cool. We are all still really good friends and we met so many people through playing in M.R. We even share a rehearsal studio even though we’re in different bands. Garb is one of my best friends ever now and has a new baby girl. Jonny and I surf once in a while together but we are both currently injured. Jonny slashed his leg surfing, and I got hit by a car walking in Oregon last week, haha. I think we wrote some really catchy songs, and I can still go back and listen sometimes, step away, and appreciate them a little more than when I was playing them all of the time.

What were your favourite 10 releases from last year?
I’m really bad with time periods, so these may have come out earlier than last year but here’s some stuff I’ve been into:
Birds In Row-We Already Lost The World
Drug Church- Cheer
Turnstile-Time & Space
Cursive- Vitriola
Axis- Shift
Hot Snakes- Jericho Sirens
Fiddlehead- Springtime and Blind
Tera Melos- Trash Generator
Converge- The Dusk In Us
Ken Mode- Loved


Can you tell us anything about these song names individually?
Haha. I can’t remember where all of those dumb names came from. They were mostly just tongue in cheek jokes from band practice. "Lie to me Ian" came from a demo recording session we tried to do with a guy named Ian who had no idea what he was doing, so he just kept lying to us.

"Kip Winger" is the name of a drink we made up after the terrible band Winger. It’s vodka/Diet Rockstar because we all know Kip Winger was just a Diet Rockstar.

"Hot Stone Meaty Party" was a dish at an Asian restaurant we used to frequent.

"Man The Ramparts! Bananalyze The Tradewinds" was a mixture of us stealing from the band Botch and also creating a new word, “bananalyze.” It’s when you’re completely bananas and overanalyze things. Dan Deaton used to bananalyze everything.

"Manbird" came from a time when an old friend of mine said out of nowhere, “I like birds.”  And then he was trying to be tough, and said, “You know, like Manbirds. Eagles, vultures and hawks.” I think he was stoned.

"Terroplane" was the name of a horse I bet on in Del Mar and lost.

"United Lead" I think I just made up. It’s Lead, like pencil lead or metal, not leader. I just liked the way it sounded.

"Illegal Dracula" Garb thought it would be funny to envision Dracula getting held up at customs or the TSA when his paperwork didn’t check out.

"Chuck Woolery is Leviathan" because he is Leviathan and we are all in Jeopardy.
Posted by Dave Norman at 08:31