I first heard about DEAD HOUR NOISE when they sent me their 2020 'Sleeping Dogs' full length to review and I fell pretty hard for them. Right away there was a confidant swagger to their mathy, metallic hardcore approach that calls for comparisons to Every Time I Die, Curl Up And Die, Von Wolfe and Bleeding Kansas. I delved into their back catalogue and the following are my thoughts, but be sure to check out that new album (and cds from the band + gorgeous swirl tapes from the band and Tomb Tree Tapes) because it hits all the right notes if you like the aforementioned bands.

The band's hey-how-ya-doin' was 2014's 'Tension' which, when compared with pretty much everything released after, is dirtier, grittier and a bit less technical. It houses 8 tracks and for a debut this is fucking stellar, bringing to mind Curl Up And Die and Creeper in the way the songs seem to drip in black from the ceiling but are still fast and heavy enough to catch you by surprise and subsequently crush you. "Slumber" and "1960" are fast and deadly, both of which stay in the chaotic hardcore realm more than the mathy, metallic hardcore one you'll find them in now. The most out-of-the-box song is "Affliction" although closer and lengthiest number "Pardon Me" boasts some very different sounds which are still highly effective in kicking my ass. My personal favourite is "Sinner", although straight-forward in approach, it goes super hard and lays down some mad licks at around 40 seconds as well as a deathly breakdown thereafter.

After two decent tracks 'Bad Things Are Going To Happen To Good People' really gets going. "Gambler" is dirty-as-fuck with a breakdown at 45 seconds that is bloody disgusting. "Guerra" is chunky and apocalyptic with a bit of Botch going on and "Wood Chipper Abortion" is fantastic, sounding just like you think it does in a mere 30 seconds. Ace in the hole. "Dead Dreamer" is another righteous banger not unlike a dense, spastic ball of energy bouncing seemingly at random off the walls.

In 2017 they released a split 7" with Hordes, the first in the 'Hard Split' series, and their song "4138" is the bridge from the early material to the later, as once that breakdown hits just before the minute mark...well, that's essential DEAD HOUR NOISE right there. 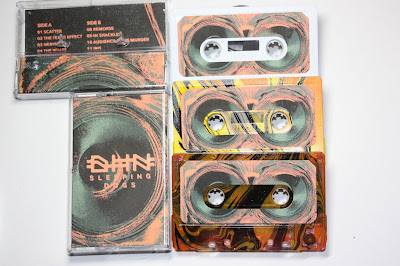 First off, the production on 'Sleeping Dogs' is fantastic, making everything crystal clear. Opener "Scatter" wastes zero time in creating raw excitement, but it's at 50 seconds when the flexes a driving riff that eventually topples the entire song with a crippling breakdown. "The Texas Effect" is next and also boasts some seriously killer time signatures, shifts and another swelling, circular riff that ushers delicious screaming. The methodical breakdown in "Nerves" that crosses the three-minute mark is a joy to listen to on headphones, and good lord those drums kick-ass. "The Waltz" is more Ken Mode and Curl Up And Die then I think I've ever heard another band do, and it's done in DEAD HOUR NOISE-mashup style, making it even sicker. The nightmarish bass and drawn-out/eclectic screams lead into an insanely sludgy, stop-start at the two-minute mark, and is topped at four minutes with some mad Bleeding Kansas solos. "Vessel" is another banger that brings their Botch love to the foreground, while at 1:20 in "In Shackles" shit gets gets fucking wild, with the remainder of the song going so hard that I just have to mention The Minor Times. The most adventurous tune on this album is track 10's "Audience Joins Murder" which surpasses seven-and-a-half minutes, hitting all the major DHN hallmarks and adding a few ones, including that magnetic, epic riff that permeates the midsection of the song.

I should reiterate again that the Tomb Tree Tapes cassettes for 'Sleeping Dogs' are very sick and come on three variants (opaque swirl, transparent swirl & white) that can be picked up from the band or the ZBR distros. I've been interviewing the band and we just wrapped it up so expect that later June!