ELÄNDE were a very short-lived but amazing French post-hardcore/screamo band in the vein of Daïtro, much like a lot new bands inspired by the French greats.

Their first release is the stunning debut 'EP - 2013'. It opens with "Corps sage", which is 5:30 in length and weaves a beautiful pattern of post-hardcore/screamo with the Daïtro influence burning bright. The swinging guitars and bass from two-plus minutes is mesmerizing and also brings to mind Mihai Edrisch and Envy. By three minutes we are met with a dreamy, atmospheric interlude laced with screaming and an audio clip from a movie, as well as some exceptional diddlin' at the end. "Les mots de cils' is another spacey post-hardcore jam with a heck of a lot of French screamo going on. If you're into newer stuff like Pettersson, Quasar, Yarostan, Viva Belgrado or Au bout de mes lèvres you will surely get a kick out of ELÄNDE. The movement at 1:05 and subsequent climax are stunning and exhaust the listener (in a good way) but manage to catch you like a cloud during the fall thanks to an interlude made of post-rock, jammy instrumentals and another audio clip. This builds for a good two minutes and pops at 3:20 when everything kicks back in again, Daïtro style. Mmmmm baby. 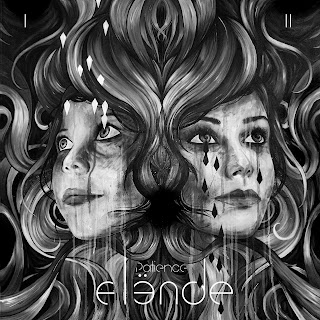 The following year the band released 'Patience', another two-track affair with much better production and a stronger focus on intricate guitars instead of audio clips. "Patience part I" begins very mathy/proggy with shifting instrumentals and excellent dual guitar plucking, kinda like Kidcrash but a little slower and spacier, perhaps coming off more like early Russian Circles than anything. By 1:20 we are back in traditional ELÄNDE territory, but with very poignant guitars that give me a bit of a Standstill vibe and therefore La Parade also. The midsection heaves in epic fashion, accentuated by throat-wrenching screams, with the entire thing dropping into a subdued interlude with distant vocals. The song picks up again thereafter and explodes at 4:12, making it a contender for best ELÄNDE track of all time...although there are only four songs. "Patience part II" is only 3:33 and it is the most straightforward ELÄNDE track, which I think fans of Sed Non Satiata will get a fucking kick out of. There's an interesting and playful midsection that slowly meshes each instrument and brings to mind a lot of newer Swedish screamo. The closing third takes flight with dual screamers and some singing from 2:33 onward, making this sophomore and final release a thing of destructive beauty.

They disbanded a year later, but now two members of ELÄNDE are currently playing in Lorem Ipsum and another is doing a solo project called Frames. Definitely a band I don't see discussed much, which is surprising because of how much everyone loves Daïtro.