Hey there. Do you miss and long for the nostalgia of the Myspace era? Do you often think about angsty usernames, killer profile songs, top 8 friend lists and skinny jeans coupled with white belts? Look no further and allow me to introduce you to the band GEISTERFAHRER! They are not only influenced by the roots of the Myspace underground music period, but they are also carrying the torch into the next decade with a strong progression on this unique moment in time. 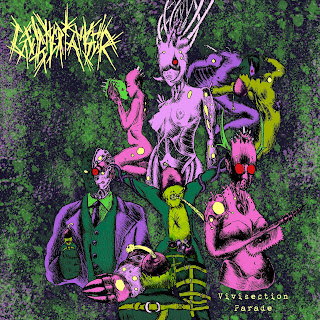 GEISTERFAHRER is a devastating three-piece band from Boston, Massachusetts. Overall their sound can be described as a hybrid of death metal infused math-grind with healthy doses of offbeat chaos. The band consists of Pete Dugdale on vocals, CJ Romeo on Guitar / Synth and Andre Forero on drums. The band's name is derived from the German term for 'wrong-way driver', which translated to English means 'ghost driver'. These individuals drive on busy highways on the wrong side of the road in a self-destructive manner and at times can also potentially inflict harm to other drivers. When it came time to choose a name for this project during their inception, Pete suggested 'GEISTERFAHRER'. This was a name he was intending to use for a failed screamo project and it struck a chord with the rest of the members. They all liked the unusual name and how this dangerous, terrifying and brutal occurrence of 'ghost drivers' relates conceptually to the destructive nature of the band. Thus GEISTERFAHRER was born.

The band's first offering of music is a single demo track for the song "Tips on Dating a Masochist (Asking 4 a Friend)" released in December 2017. The track has an overall rawness in its production style. This rough and edgy approach complements the violent and explosive nature of the track. The guitars hit with the utmost ferocity, the vocals are delivered in a volatile fashion and the drums pound the listener's ears into oblivion. One can hear the strong influence of death metal and math-grind shining throughout this monstrous offering. The band also injects some pummeling metallic breakdowns for added heaviness and sass influenced vocals amidst the catastrophic gutturals Pete delivers to create some much needed vocal diversity. I'd equate these 'sass' vocals to the likes of Alexis Marshall from Daughters and Robbie Smith from Heavy Heavy Low Low. Pete also cites Gerard Way of My Chemical Romance as one of his biggest influences on the sass infused vocal sections. The guttural moments of the track remind me of the tone and delivery of vocalists like Chris Fox from See You Next Tuesday, Frankie Palmeri from Emmure and Mitch Lucker from Suicide Silence. Pete also cites Travis Ryan of Cattle Decapitation, Chris "CJ" McMahon of Thy Art Is Murder and both Dan Watson and Dickie Allen of Infant Annihilator as massive influences for his heavier vocal inspirations. I can definitely hear those influences creeping into the mix. All in all, this track was aimed to be an introductory statement for the band. It helped to create some interest in the band and their upcoming plans regarding music as they prepared to drop their debut full length. I remember when I first saw the link to this song posted in a Facebook group. The band's name and 'FFO' description piqued my interest. When I clicked play, I was very impressed with the potential the band had on offer and was highly anticipating the arrival of new music.

The band would return with their debut, 'Demolition Fetish' which they released in July 2018. The entire album features 10 tracks and clocks in at around 25 minutes. The band tightened up the overall production on this release, whilst still retaining the raw aggression from the demo single. The entire release sounds absolutely furious and is definitely not for the faint of heart. Pete's vocals are savagely delivered and demand your full attention. He also employs some clever moments of 'sass' influenced vocals to create this unhinged vocal juxtaposition. The guitars on the album are played with a manic and destructive quality. The guitars weave from buzzsaw death metal type riffs, towards concussive laden breakdowns and frenzied chaotic assaults with seamless fashion. The drums lock all this down with technical precision and hard-hitting moments like a knockout punch to the face. Overall this album feels thick and filthy in the most brutal way possible. My personal standouts from the album are "Grave Pact: Judgement Chain!", "A Ship is Safest at It's Dock, but That Ain't What It's Meant For" and "Blood Prisoner". I'm especially fond of the disgustingly long and anguished scream Pete employs around the 1:24 mark in "A Ship is Safest at It's Dock, but That Ain't What It's Meant For". It's so unsettling and captures the vibe of this release perfectly. GEISTERFAHRER definitely struck a chord with 'Demolition Fetish' as it made waves within the underground community and garnered the band more attention from wider music audiences. The album would also see a limited run of 50 translucent green tapes, released via Pattern Recognition Records based out of Champaign-Urbana, Illinois.

In late October of 2019, GEISTERFAHRER dropped their highly anticipated new release. This savage 5 track EP is entitled, 'Vivisection Parade'. The entire release is a frantic ride and clocks in at a blistering 7 minutes in total. On this material, the band strays from their sassier moments from their debut and seems to embrace a lot more of their death metal influences. Never fear though, the band still ups the ante with healthy does of metallic breakdowns and chaotic passages featuring bursts of dissonance. The EP begins with a seamlessly relaxed and innocent introduction of hissing, static and garbled dialogue. This seems to evoke the quiet before the storm for the listener. True enough, the EP finally springs into gear once "Deadbridge Chant" kicks off. It's a truly dissonant and raging track. Pete sounds like a man possessed, while the band barrages your ears with raging walls of noise. Up next is "Queen Mab Rehab". The band pummels the listener to decimating effect with blasting drums, chugging guitars and Pete spitting bile on the mic. Finally, the track climaxes with a destructive whammy infused breakdown to beat one into further submission. Before you can catch your breath and gather one's bearings, the band kicks off into my personal standout from the EP. This is the violent and abrasive "Android Fitness" which features some of my favourite vocals. Pete sounds inhumane in the best way possible. Closing the EP is the solid "Social Media Werewolf". The track features some frenetic and chugging guitar work. It's a short and sweet onslaught of pure insanity. Believe me, when I say this you'll be hitting the replay button for another battering soon enough.

Pete has mentioned that the band is hard at work on a new full length and it will feature more of a shift in the overall type of vocal performances. Pete will be exploring the usage of harsh vocals like pig squeals and implementing even more types of guttural techniques to his already impressive vocal arsenal. I'm excited to hear how much more brutal and chaotic the band can possibly go moving forward. I'd also love to see some collaborations with other guest vocalists on some of the newer tracks. I could hear some cool vocal interplay with vocalists like Hunter from Sleepsculptor, Carson from The Callous Daoboys or Eeli from Fawn Limbs. There is just so much potential moving forward, it's quite exciting seeing what the band will deliver next.

So... if you love music that pushes the extremes, I highly recommend following GEISTERFAHRER right now! Their destructive journey into the underground music scene is just getting started.