I've been pretty reclusive since moving to Nanaimo, mainly due to a scene with little that I am interested in (at least currently). But I go to Vancouver every few months to catch friends or travel to Victoria. Here are most of the shows I went to in the last year and a bit. Sorry about the lack of shows but I obviously was mad spoiled living near Toronto. But this summer I'll be putting on Zegema Beach Records Fest 2019 in Vancouver with my friends so I'm fucking psyched for that. Here's a teaser with some cool moments from all of the videos in this post. 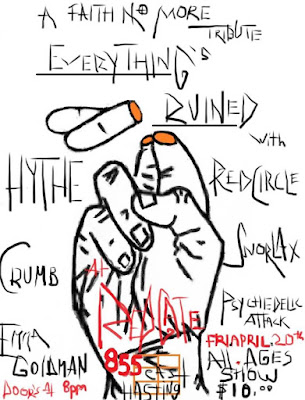 After witnessing the EMMA GOLDMAN release show (linked here) I was hellbent on the seeing the band again, and see them I did.

EMMA GOLDMAN
They didn't disappoint. They never do.
Link to song: *new song*
Bandcamp
For fans of: Funeral Diner and Bright Calm Blue

HYTHE
I really enjoyed this band. They're kinda crusty hardcore/metal with wild, ferocious vocals that bordered on black metal. You might notice that the guitarist of this band also drums for Red Circle.

Bandcamp
For fans of: Slayer and Closet Witch

RED CIRCLE
A very active local band with a bunch of people that play in other bands, this was my second time seeing them. Fun, energetic and engaging, the song "Squirt" is the thing I remember most about this band.
Bandcamp 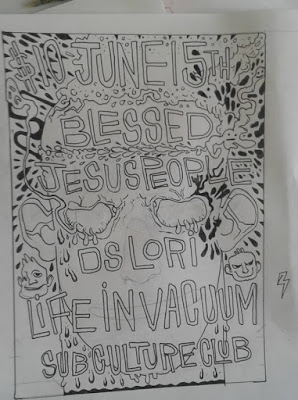 I was so stoked to see my friends in LIFE IN VACUUM, plus I got to see a bunch of new local bands. Plus I met Troy from the University. Twas a good night.

LIFE IN VACUUM
They released 'Quitting' last year and it made my top 10 of 2018. This band is incredible and you're fucking up if you don't already know that. I used to see them all the time in Ontario, damn I was hella spoiled.

Bandcamp
For fans of: METZ and Blue Youth

Bandcamp
For fans of: Yoo Doo Right and By Divine Right

DS LORI
I knew nothing about this band, but damn it was interesting. Utilizing drunken/screaming vocals, guitar, bass, drums and some kind of a single-stringed instrument propped up on a crate.

Bandcamp
For fans of: Sonic Youth and The Paper Chase 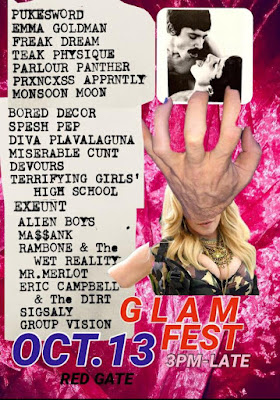 I only knew my three friends' bands Diva Plavalaguna, Terrifying Girl's High School and Emma Goldman (all of whom are playing ZBR Fest 2019) so I saw a ridiculous amount of new bands and have likely misnamed a few of the bands. If so I apologize please send me a message correcting it.

FREAK DREAM
This was the first band I saw and I was like...woah, good fucking start! The two-piece put on a supercharged set of rock/electro-noise with enough sass to turn a few heads on this blog, I'm sure.

Bandcamp
For fans of: The Locust and Rage Against The Machine

PARLOUR PANTHER
I enjoyed this way more than I thought I would, but in retrospect it was just cuz I don't generally seek out this style of music. Watching all three members layer their angelic vocals was intoxicating.

Bandcamp
For fans of: Portugal The Man

BORED DÉCOR
Shouted, keyboard-driven noise-rock. I think I'm a bit closer on this one.


DIVA PLAVALAGUNA
I was finally able to catch my friends on camera (and not subsequently delete the entire thing) at the fest, and they definitely got one of the strongest reactions after this song. Super-sassy, synthy skramz.
Link to songs: *1* / *2*
Bandcamp
For fans of: Soiled Doves and An Albatross

DEVOURS
This was very interesting solo stuff that was all done through a keyboard and the lone-member singing. Very 80s. Very cool.
Bandcamp

TERRIFYING GIRL'S HIGH SCHOOL
Sassy, screamy and shrieky, these four know how to move around and get people into it. New EP premiering on OMSB any day now!
Link to songs: *1* / *2*
Bandcamp
For fans of: Vade and Senza

ALIEN  BOYS
Punk rock band with definite hardcore and metal tendencies. Super nice, they even gave me a cd.
Bandcamp 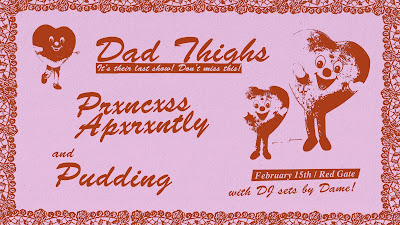 This was the final DAD THIGHS show so it was a no-brainer.

DAD THIGHS
The band played an hour-long, emotionally charged set, switching members as they progressed through their catalogue. Twas a night to remember, that's for sure.

Bandcamp
For fans of: Heart On My Sleeve and Cavalcades

PRXNCXSS APRNTLY
I really enjoyed this band. mixing each other's vocals with deep, funky bass and nods to both garage rock and post-hardcore.

PUDDING
Featuring members from a ton of bands (including most of Red Circle) PUDDING gave a punk/shoegaze glaze to the night. 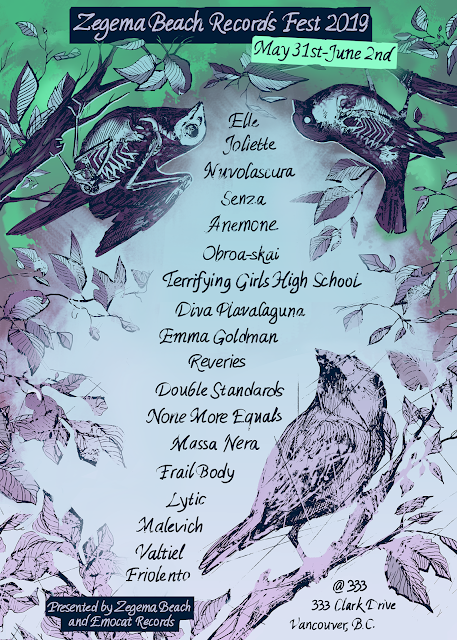