Today marks the release of 'approximation_of_a_human' by Richmond, Virginia's .GIF FROM GOD, so the timing of this post could not be better. But, let me start off this review with some facebook messages between .GIF FROM GOD guitarist Christopher Morgan and I from mid-2015, as these were exchanged after Chris sent me an unfinished version of "Let's Look at the Plague" and asked if I would be interested in helping release it.

DAVE: "Okay my friend, I listen to a lot of music and get sent a lot of stuff, but this is blowing my fucking mind. Thanks so much for asking me. I'm really pumped on this."

CHRIS: "Dude. You've shown me a lot of good music that has definitely influenced this. I thought you would enjoy it."

And that is still one of the most amazing things I've ever heard. This little blog and my stupid opinions of relatively obscure music became a small ingredient that ultimately led to one of my all-time favourite bands, .GIF FROM GOD. I guess that's the beginning of my story.

Next, I was sent '...defragmented...reformatted' in its entirety, and it is one of the best chaotic screamo/emo-violence albums that I've ever heard. Even after five years I still come back to it in complete awe. Besides releasing the album on tape (first and third presses), I was lucky enough to premiere their first ever song, the aforementioned "Let's Look at the Plague" on the Zampler #6 'Would You Like to Know More?' compilation released January 1st, 2016. It was the first song that core member Christopher Morgan ever wrote on guitar and it was directly influenced by Me And Him Call It Us' "Innocent Bystanders Watched In Horror", and woah nelly does it show during that final behemoth of a breakdown. Speaking of breakdowns, "self pwnage for a narcissistic nutjub" is chock full of'em and is probably the song most telling of the sound they fully adopted by their 2019 full length.

If you're looking for .GIF FROM GOD's eternal anthem, it's gotta be the utterly mindblowing "rats". This song is truly exceptional as it is very, very accessible at the start but shows the sheer chaos that the band spends 80% of their time doing by the halfway point. The first 45 seconds is reserved for slow, scratchy palm-mutes, buried Neil Perry guitar tones and mumbled vocals that create an excellent tension that is broken by Mitchie's soaring singing, a helluva ear-worm and the perfect build/transition to the devastating breakdown and catharsis that is unleashed come 1:16. If I had to make a list of my top 10 songs of the last 10 years, you bet your ass this song'd be on there.

Opener "adios bozo, this time i'm downloading you straight to hell" showcases the short, abrasive and speed-driven side of the band (save that uncomfortable intro), but this is perhaps exemplified best on "physics problem: sucking nothing but vacuum" alongside some comedically puked vocals and warbled ramblings. The last half of "technology will kill you 111111" is a vicious romp through barbed wire, breakdowns and a plethora of screaming while the first 1:40 of "empty grave, shallow mind, i'm still alive but my head is full of shit" sounds like a digital nightmare that is followed by sassy, myspace-era metalcore/false-grind that tickles my fancy more than any other band that's tried.

I'd be downright shitty not write a little paragraph about closer "maybe none of us understand what we have lived through" because that track is fucking stellar. It begins with a lone guitar that is met with drums after nearly 30 seconds of light, passive strumming. The first set of vocals kick in after the minute-mark, with the second-set overlapping on the second pass, creating an ethereal, almost mystical aura as the song begins to spin down the screamo whirlpool at 1:40. The gang screams of "six feet under in the blink of an eye" are infectious to say the least, and lead the song perfectly to its 2:17 climax of sung vocals, screaming, shrieking, and dare I say post-hardcore instrumentals over lightning drums. Seriously, it's all exceptional in every respect.

In the summer of 2016 I went on a little tour with мятеж and we played Swamp Fest II (put on by a member of .GIF FROM GOD) and even got to put a song on the Swamp Fest cassette comp. While I was there I got to see .GIF FROM GOD put on a almost excessively entertaining show and I interviewed the band (all linked in this post), sang with Mitchie on "rats" and witnessed a very special lineup that included two bassists (Gus from Ostraca joined in) and three vocalists (Benson from Truman & Steph from This Land Is Now Dead/Metastatic). Around this time they released a two-song cassette titled '2016 winter tour tape' which contains two demo versions of songs that appear on the 2019 LP, "no dude, he likes to spray" and "sassafras molasses ass".

In early 2017 I headed up the release of the 'Vein split' 7" and it was received with exceptionally warm enthusiasm. The band Vein promptly blew up and their side of the split 7" was repressed without informing .GIF FROM GOD or myself (who still had over 150 copies) and then blasted the band in an album premiere interview...not exactly the most professional or mature thing to do, and quite frankly it was embarrassing to watch. Regardless, the split eventually sold out and obviously will never be repressed. It's an excellent release with a discouraging and slightly depressing backstory to it, but the two exclusive .GIF FROM GOD songs are amazing and the perfect bridge between the band's old and new material. "why i died wide eyed" sounds like the audio equivalent of a simultaneous stroke and heart attack, especially that nightmare section that creeps in after that first minute. Seriously that's some 80s horror movie shit right there. "like a splinter in yr minds eye" is another banger that takes a dark path, with truly murderous guitars that new member Brian incorporates that (at this point in time, 2017) were still vaguely reminiscent of his other band Ostraca. 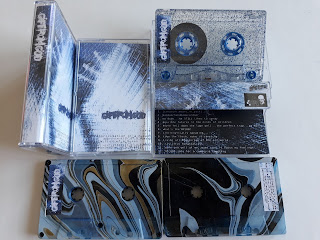 2018 was very quiet for the band, as they played a few shows, did a tour and wrote for their second full length. It was with said record 'approximation_of_a_human' in 2019 that .GIF FROM GOD signed to Prosthetic Records and crossed over into the mainstream of heavy music. Somehow the band managed to get the label's blessing for me to press some tapes via Zegema Beach Records, so I did. 250 copies to be exact, over four variants. And I gotta say they look pretty sick. Speaking of sick, the record is flawless and without a doubt in my top five of 2019.

The LP begins with a disturbing noise track titled "[creature_moans_in_pain]" before barreling out of the gate with "mandoorhandhookcardoor", a shocking and direct digital injection of mathy metalcore and a few remnants of screamo/emo-violence. The repetitious use of numbers in the lyrics signal the instrumentals to drop out and swing back in again with an annihilating breakdown that utilizes a spacey, trippy guitar layered over-top. The final recording of "no dude... he STILL likes to spray" is so much heavier than the demo it's almost comical. For this album the bassist Andrew moved to vocal duties and really nails the gutteral growls and the high-pitched squeals, as their presence is nourished on this version. Not only that, but the outro has been beefed up substantially with a breakdown and piercing, laser-esque guitars that take it into Tony Danza Tap Dance Extravaganza and Frontierer territory. "possible futures in the minds of children" is the track most akin to their debut album, as the intro guitars and screaming have a very Love Lost But Not Forgotten feel to them. I love the stop/start section around 1:30 with a sassy-as-fuck guitar roll, and there's also the dancey, panic breakdown outro instigated by cacophonous laughter at 2:07. By the time "Kevin fell down the lube well... the perfect trap... gg Kevin" hits it has become apparent that .GIF FROM GOD has (for the most part) ditched short songs, settling instead into a 2:15-3:30 groove that works swimmingly with the new math metal material. At 1:10 we are met with a sensational breakdown followed by some hardcore that bares a slight resemblance to early Graf Orlock material. "BP2BB" is another interlude, although this track favours instruments over ambient noise and leads into the death tornado also known as "cincinnatically speaking". The shrieks and growls on this track are fucking bananas...as is the entire structure, come to think of it. After pinging off the walls at the speed of light the band opts for a dancey part that mirrors The Great Redneck Hope, Fear Before The March Of Flames and SeeYouSpaceCowboy at the 55-second mark before reverting back to absolute chaos. "take the flesh make it stretchy" is an uncomfortable sounding title (especially if speaking to my wife about elbow skin) that is a standard 2019 .GIF FROM GOD ripper, complete with a whirlwind of panic chords and double-bass destruction. The opening chugs and sinister licks of "living off the corpse of the old world" provide the jump-off point for some of the band's best trade-off vocals as Mitchie and Andrew spew nearly nonsensical screams at each other with no breaks. There's a specific line at 1:34 of "and smile for the fucking camera" that makes the hair on the back of my neck stand up as well as an apocalyptic breakdown that ushers the track out. "sassafras manassas ass" is the shortest of the proper tracks, reaching only 1:24 in length, but holy shit does it deliver. Prior to the climactic breakdown there is a part that sounds like the screamo equivalent of Neo being unplugged from the matrix as the vocals distort into static noise, which I call "the Matrix part", and it's so fucking good. The last proper track is "when you yell at me, make sure it hurts my feelings" and it is easily one of top songs as chaos, anger and passion is palpable. The entire song slaps but the 1:27-plus midsection is a clusterfuck of everything that makes this one of the most exciting and engaging bands around. Closer "40,000 jobs for a cowboy and counting" is a washed-out alarm followed by a frightening, (likely) John Carpenter-inspired synth beat.

It's been an honor to have taken this ride with .GIF FROM GOD since their inception, and I am so stoked and proud of them for taking the effort to push their incredible music to more people. And thank you Prosthetic Records, for recognizing amazing things that have gone under the radar for too long.

So...goddamn, that's a lotta words. But not enough for the .GIF

I love you .GIF FROM GOD.

There, that should do it. 💘

(2019) .GIF FROM GOD - "possible futures in the minds of children" (from 'approximation_of_a_human') official music video