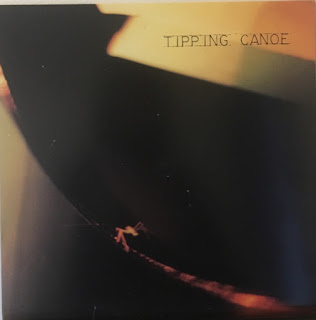 This review has been a long time coming...one might even say more than 18 years late. TIPPING CANOE were a sassy screamo/rock band from Massachusetts that released two splits and an LP in their short three years together. Instant comparisons in sound can be made to Aim Of Conrad and Wow, Owls!, but the best thing that I can think of is that TIPPING CANOE sound as if they were the screamo extension of where Rye Coalition could have ended up if they didn't take the 70s stadium rock/Thin Lizzy route.

Their first two releases came in 1999 with a split 7" and split 12". The 7" houses two tracks that were rerecorded for the LP so I'll just skip 'The Snacks split'. Their 12" split contains five jams, all of which are exclusive to their 'Ettil Vyre split'. Opener "Life's a Rearview Mirror" starts off sounding like the precursor to These Arms Are Snakes, as it writhes along awkwardly yet with an obvious groove. The bass carries the next section as yells turn to screams and the track shifts to yet another very danceable section that brings Logs and Bright Calm Blue to mind. "Nomos" is next and shares much more in common with Aim Of Conrad, The Exploder and Light The Fuse And Run, making it a frantic, drum-led dash through two minutes of sassy, screamy hardcore. "Annabelle" has a strong PG.99 and Malady flavour to the vocals as they switch between yelled/screamed and whined/sung. "Hangman" is much slower and jangly for the first half before closing out in their tippical (ha) fashion. Closer "Hansel's Drive Home" begins as a lo-fi jam with some sick bass and Yaphet Kotto-esque guitar interplay before spending the final 1:10 in blown-out, instrumental post-hardcore land.

Their crowning achievement would have to be their 'Tipping Canoe' 12"LP that was released, I believe, the year after they broke up on Forge Records. This release really hones their sound, mixing the vocals and sass of the early Rye Coalition 7"s and splits with a screamy emo/hardcore sound not unlike Indian Summer (although not as brooding) and The Exploder (albeit less screamy). This is quite obvious from the get-go on opener "Order to Stop Construction" but it bleeds into each track a bit differently every time. "Minute of Arc" is by far one of the most chaotic and abrasive tracks, boasting frantic drumming and some very Indian Summer guitars, making this one of my personal faves, especially from 1:40 onward when shit gets very melodic and dare I say post-hardcore. "Wicker Man" and "The Way" are both longer, darker and more restrained while the dancey, sassy rerecordings of "Rope Walker" and "Mourning Songs" show up, lighting the flame that may or may not have inspired Aim Of Conrad and Light The Fuse And Run to refine the sound further. There are seriously no duds on here and I strongly recommend grabbing this LP in the download along with the other two releases.