Label(s): lots of them 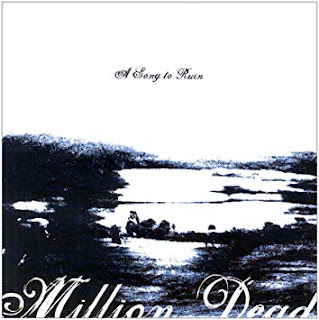 I had seen Frank Turner's name around for years but never checked out his solo stuff. When my friend Vanessa from Crowning came to my place and we did a podcast together she introduced me to his "hardcore" band MILLION DEAD. Considering I didn't know the former I wasn't all that excited to hear the latter. Upon hearing it, though, I changed my tune quite quickly as her pick "I Am the Party" is a stellar jam off an album that I searched for afterward and played heavily, titled 'A Song to Ruin'. Later on I looked into the band's final album 'Harmony No Harmony' and wasn't nearly as impressed, so this review will focus almost solely on 'A Song to Ruin'. The early stuff just isn't very good and the later stuff feels almost too refined.

So 'A Song to Ruin' was released way back in 2003 and draws sounds from At The Drive In, Q And Not U as well as Marathon to create a sassy, poppy and screamy punk record that sounds like none other than MILLION DEAD. Opener "Pornography For Cowards" opens as a raging hardcore song before shifting to much more melodic rock/post-hardcore and is followed by another doppleganger titled "Breaking the Back" (which has a music video as well) that is both driving and anthemic and not unlike At The Drive In. "I Am the Party" is next and was my introduction to the band that is still a favourite of mine, as the near overconfidence as well as fantastic vocal placement and lyrics are infectious. "Charlie and the Propaganda Myth" is a very Propagandhi song in every sense of the word, as it focuses on movies, media and their purposeful subversive messages...and it also sounds like them. Some other decent comparisons to the sassier, more melodic stuff would be both Moneen and Christiansen, but again the band really did their own thing. Things slow down considerably with "A Song to Ruin" but that doesn't mean it's not a great song. "Smiling at Stranger on Trains" speeds things up a bit but this is still a light song, bringing pop-punk meets emo to mind, and holy shit is it catchy. I also thoroughly enjoy "Macgyver", "The Kids are Going to Love It", "Gnostic Front" and "The Rise and Fall", the last of which has a serious Chris Hannah feel to the vocals.

I guess it's time to immerse myself in Frank Turner's solo work. Thanks, Vanessa!

for the complete discography check out the band's page linked here