BINARY has got a very cool thing going on. Besides being called BINARY and having 50% of the members being non-binary, they seem to be equally straddling sassy metalcore and screamo/emo-violence, without ever clinging to a single rung. This highly concentrated mixture is quite volatile, bordering occasionally on dancey bits, straight-up punk and massive breakdowns. They released a three-song demo tape in late 2017 which caught my attention, and before even hearing the masters for 'Commit More Arson' I was on board with Zegema Beach Records to help out. The band is already writing, playing shows and might even be heading up to see me for ZBR Fest 2019 in Vancouver.

So that 'Demo' tape, it's a fuckin' banger of a debut, good lordy lou. It opens with the feedback intro of "Dataloss" and the subsequent song itself, which I find a bit of an anomaly from BINARY, as it seems to fall more directly into the screamo category. Clocking in at 2:24, you've got your slowdowns, temperate guitar picking and no discernible latching onto either the metalcore or emo-violence breast. Second is "1+(773)509-8000" which blazes through in a much denser and chaotic 56 seconds with a slight dip in the middle. Finishing off the EP is "Around Here We Mourn Our Young", arguably the most representative track of BINARY's true sound on here, and it's best, as it is solidified as such from 1:00-1:48 when the breakdown knocks the building down. 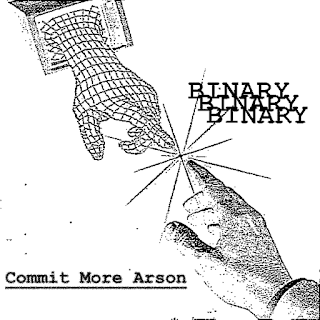 Initially slated as a 7" release, 2018's 'Commit More Arson' was too long and had to be put on a one-sided 12" instead. All three tracks from the 'Demo' were rerecorded and end up sounding much better, although the newer songs surpass them rather quickly. Opener here is the EP closer "Around Here We Mourn Our Young", and oh boy is that second half even more dangerous than the initial recording. "Do You Know How An Angler Fish Works?" is the sophomore track and does a heck of a lot more in its 2:31 than you'd expect. A long feedback intro rolls into a very disturbing and truthful audio clip of a person discussing their identity problem before Jordan's shrieks tear up the speakers along with the fastest and most intense section yet, concluding with a righteous, blown-out instrumental outro. "Nice Moleskin, You Can Write In That With Your Head Up Your Ass?" is easily one of my favourite BINARY tracks as from 48 seconds to its 1:08 close the guitars loop a panic riff over an epic bass/drum section and venomous screaming. Haven't listened to it yet? Do it by clicking here. Holy fuck...right? "Dressed to Depress" is a 24-second jaunt through a blender getting thrown into a wood chipper. "This Song Title Used to be a Phone Number" is the new title for the rerecorded second EP track, and the screaming on here is even more evil and desperate than the original. "Dataloss" is also here, and the rest are new jams, like the awesomely titled "Like Us On Facebook To Make Us Hypocrites", which sounds kind of like .gif from god slowed down a tad but shoved into a 36-second box. "It's Prince!" is perhaps the most adventurous and ultimately epic BINARY track, with a swing and pull during that first minute that is undeniably strong and begins to drown the listener by its 1:15 breakdown. Just crushing. Crushing? Wait, I haven't even talked about the utter behemoth of a closer "I'll Backhand The Fuck Out Of A Seagull" which was initially premiered on the Zampler #11 (linked here) compilation July 1st, 2018. After tearing through the initial 30 seconds the instrumentals pull back and begin to swell, swirling around slowly until 1:12 when shit goes fucking ballistic and those SeeYouSpaceCowboy-esque guitars squeal and crunch over the piercing screams that silence the album.

Hot damn, I'm fucking smitten. Also, I just listened to an unrecorded practice demo of a new BINARY track and that shit is gonna make me even smiter. Smitier? Smittier? Ahhhhh fuck. The 12" should be out early October if we're all lucky. November at the latest, methinks.