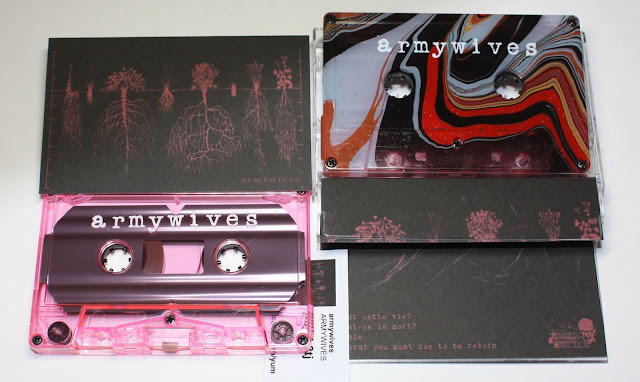 ARMYWIVES are ridiculous. Their early work from 2010 to 2014 was decent, but in 2019 they came back with three excellent singles and a stunning EP in this utter shite year that is 2020. If you like your screamo with jazzy noodles as well as post-hardcore then by golly this New York/Philly band is for you.

The aformentioned '2010-2014 Discography' is a mildly stripped down version of what ARMYWIVES is now. It's kinda Pianos Become The Teeth screamy post-hardcore with "Herald" and "Choke" being the stronger tracks, but closer "Bygones" is my favourite and therefore also closest in sound to their new material. It reminds me most of the 'A Short History of Decay' material and is equally muscular and sensitive with .

"Thoughts + Prayers" was the first song I heard by the band, after they asked if they could play ZBR Fest 2020, to which I replied good god please do. Remember Dowager? No? Well...shit. Kinda Eyelet, kinda Kidcrash, and that's exactly what this song has, but with a noticeable ARMYWIVES spin that has recently had me enamored by their output. "Twenty-four Karat" is another fucking banger, beautifully intertwining the noodles with the heavy, including some excellent screaming and one helluva sick intro. The final single I heard was "Unmarked", and I'm glad I heard it last as it gives me the least feels out of the three, mostly due to the poppier nature of the instrumentals. You're not going to find any clean singing, but the post-hardcore nears pop-punk - and not in a bad way...I just love me some Kidcrash.

Leading up to ZBR Fest 2020 I asked the band if they had new material coming out, to which they replied, "yes, we'll have an EP mastered in a week or two." Very good timing. So I went ahead and released that unbelievable self titled screamo gold on cassettes, with Missed Out Records releasing (and immediately selling out of) 20 lathe 7"s. 'armywives' was first premiered right here on OMSB on April 20th so I'm not really going to go into another track-by-track commentary, although I will say:
- the intro of "est cette vie?" gives me all the Kidcrash feels and the subsequent explosions are epic
- "est-ce la mort?" is the most versatile of the four
- the end of "able" is crushing
- the looping/forever-morphing progression is awesome, and those screams are the best on the EP

I dunno what's next from ARMYWIVES but I expect it to be in my top 10 list regardless of length. This band is the shit.