MY HEART TO JOY AT THE SAME TONE

Band: MY HEART TO JOY AT THE SAME TONE aka My Heart To Joy

MY HEART TO JOY AT THE SAME TONE is a band the grew up very quickly over the course of their six year existence. Beginning in lo-fi, screamy, chaotic hardcore and ending up in twinkly demo territory, I both enjoy and am mildly bored by their discography, which I will now review rather quickly.

Upon doing this review and checking other blogs discography lists, I didn't see one that included the 'Demo Days' EP which I happen to have. And I'm glad I do, as it's my second favourite MY HEART TO JOY AT THE SAME TONE release. This thing is definitely lo-fi and raw as shit, but it works to the band's advantage as the chaotic and screechin' opener "I Can Hear Sirens" lets you know what's up right away. The demo version of "I Think You Woke the Dead" is next, followed by the very Orchid-esque "Dreams to burn out to..." and "Ethics", which doesn't even make it to a minute. "Angry Very Angry" must be a cover of some powerviolence band and closer "Everything Devo Ever Dreamed of" is over five minutes of Eyes Of Verotika and Lachance. Now that I look at it, half of the songs here ended up on the subsequent EP... 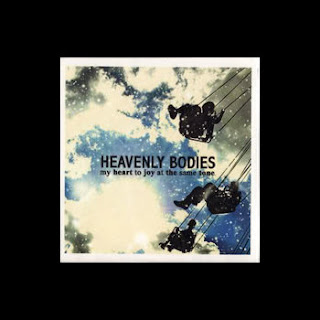 'Heavenly Bodies'. "That Ungodly Arch-Villian Voltaire is Dead" begins like a lot of great D'Amore tracks, but by the last half it becomes obvious that the band jammed a hell of a lot of L'Antietam, probably the first 7". "I Think You Woke the Dead" is short and hard-hitting, coming off more like Deers! and Bravo Fucking Bravo than the more emo sounding "Can You Feel It, Captain Compost?!" which is the only track here that feels a bit out of place, sounding like it should have come from the next release...

aaaaand that EP was 'Virgin Sails'. This thing is okay, but it's where my interest definitely began to wane. It has much gruffer vocals with most of the release having strong Touche Amore vibes, especially in the vocal department. The last third of the title track "Virgin Sails" is pretty driving but that's as good as it gets. The further shift into even cleaner, emo-driven territory becomes quite obvious on closer "All Of Life is Coming Home", which also appears on their only full length release...

the 'Seasons in Verse' LP. This houses 11 songs of further progression, sometimes I dig it and sometimes not so much. I thoroughly enjoy the playful, Birthday Boyz-esque riffing during the tail end of "Empty Homes". A lot of this record sounds like a more driving and less playful/talented version of Pack Sounds, which I just reviewed, so if you like this go check that shit out pronto. "Worn Out Weather", "Giving My Hands Away" and "Old Capitals" are decent, too, I guess. Mostly I just feel like I'm listening to every band that existed from 2008 until 2016 doing that flannel shirt and bearded thing a little too late, as Hot Water Music and Make Do And Mend already did that. Phew, and so concludes the review...

or does it!?!?! Nope, cuz I hadn't realized (until starting this review) that the band released another EP after I had stopped following them, as the three-song EP 'Reasons To Be' was their final effort in 2011, the same year as their demise. Right away we're met with those much more playful guitars I mentioned earlier. The gruff vocals have been dumped for clean singing, bringing to mind most pop-punk bands of the mid-2000s, but the instrumentals are twinkly, noodley and likely inspired by Algernon Cadwallader. Essentially, this is not my thing. At all.