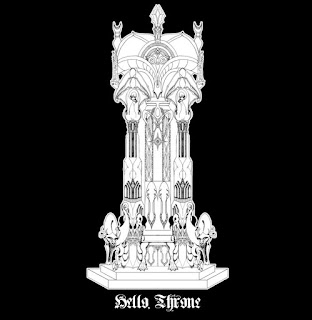 I was turned onto SEPTEMBER 22ND earlier this year by a friend's post. While I dip tapes I like listening to longer songs, so after downing 'Hello, Throne' and becoming deeply intoxicated on the band I went back and got the first two EPs. Now I'm here...and I can't find a goddamn thing about them besides their bandcamp. No discogs. No reviews. No physicals? Good story? Meh.

SEPTEMBER 22ND's first release is 2005's 'The Legend, The Ghost' EP. Containing five tracks over 23 minutes, it's an excellent look into the band's sound without it being too detached from future material. Following a haunting two-minute intro, "If the Devil were real, That sonofabitch would speak spanish." comes through in just 3:26 with behemoth instrumentals and excellent, anguished screams that border on the black-metal spectrum, with the transition at 2:30 being awesome thanks to excellent vocal placement and delivery. "The Deathrattle" is another well-rounded song, this one clocking in at 6:31 and being more of a hybrid between post-metal and screamo...landing somewhere between Fall Of Efrafa and City Of Capterpillar. Between the "The Deathrattle" and "rrRRrRrRRrrr" more than half of the EP track time is taken up, as the latter nearly reaches six minutes also, and has that brooding, slow, epic post-metal, black-metal, screamo thing going on, as well as a section just after the three-minute mark that reminds me of The Reptilian before swinging back into their danceable and screamy grooves.

2006 saw a two-song EP titled 'W.W.T.Z.D.' with a very cool skull-into-moon design that is also a drawing of a woman holding a candle in the mirror. Although containing only two songs, the 8-plus minutes of swirling, screaming, destruction is even better than its predecessor. Opener "El Diablo habla ingles" has got lots of tremolo before the post-rock outro lulls you into a false sense of security, because the second song "...that old Humboldt road." will lock you in and drown you in mesmerizing crescendos and more of those phenomenal vocals.

SEPTEMBER 22ND's final release was 2007's 'Hello, Throne', and truly intoxicating mishmash of post-rock, post-metal, hardcore, black-metal and screamo. Shit comes in fucking massive on this record, with opener "the Elizabethe" clocking in at 11:39 and it's not even the longest song here. Everything is layered beautifully, and everything heavy by the band sounds like it's been given a second coating, creating a lush, smooth but very thick layer. This track in particular has a sliding groove that hits a some spacey, riffy notes (duuuuun duuun dun DUH-DUN) before circling back and starting again. The vocals are outstanding as always, placed beautifully, screamed to the max and dispersed neither too little nor too much throughout the 70-plus minute run-time. "Solemn's Harrowing" is another breathtaking track, utilizing a slow, sludgy and dark opening that eventually opens up into a beautifully gargantuan post-metal beast just after the five-minute mark. This final movement is something else, as the vocalist produces seemingly perpetual gruff screams until 6:40 when the Trachimbrod-esque riff comes in we're all bouncing around to some kind of amazing pop-rock/screamo/black-metal monster and it's fucking unreal. Fuuuuuck that's some good stuff. "Oh, up North" and "We are our own Cutlass" are both shorter but bursting with power and subtle melodies, with the latter pushing the band's technical chops more than most of their catalogue, while the longest song the band ever produced was "As the Tapestry Allays" which would be an excellent, somber, driving-through-the-country-at-night kinda tune. "Hemlock Fields" is long, sad, moving and climactic. "Hello" is short, ambient and instrumental. "Throne" is the culmination of everything the band seemed to be leading toward. It's incredible. The opening tears and rips at the listener with guitars that swing like mammoth pendulums and throat-shredding screams, swaying back and forth until the darkness sees some light around 2:30, followed by a very chill section a minute thereafter. A brief, chuggy, driving and inspiring minute pops in from six to seven minutes and then the song takes a very jazzy interlude before reverting back to that chuggy/epic shit, which leads the song into its final, depressing death march with whispered and screamed haunting vocal lines, repeated and layered over one another until the song's 13:18 conclusion.