EF'IL
exclusive PremieRing in conjunction with:

Sophie's Floorboard (Massa Nera)
Idioteq.com (Yo Sbraito)
This Noise Is Ours (Thisismenotthinkingofyou) 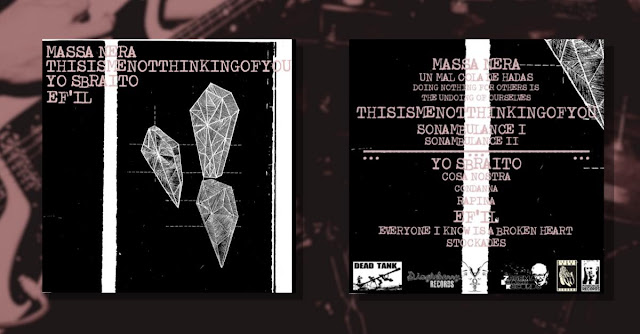 ffo: A Day In Black And White, Storm{o}, Envy, Suffocate For Fuck Sake, Apollo 18 and Daighila

Today's exclusive post comes as the final leg of The 4-Way Split 12" PremieRing. The PremieRing was an idea I just thought of recently, as bands and labels work hand-in-hand together, generally with numerous labels helping out. Getting that music to blogs is no different and I find myself conversing with the same couple of blogs every time, thus creating a bit of a blog community, if you will. I have had nothing but support and camaraderie with Kevin, Karol and James. Please continue to check out their respective and awesome blogs Sophie's Floorboard, Idioteq.com and This Noise Is Ours.

The band I'm premiering today is called EF'IL, forming in 2010 in Ipoh, Malaysia. The 3-piece have an 18-minute tape and a 9-song cassette under their belts. The members are: Muhamad Afiq, Muhamad Farid and Amir Anuar. The two songs were recorded, mixed and mastered by Jimi at Attack Studio in Kuala Kangsar. Contributing two songs of sludgy, haunting and screamy black-metal/post-hardcore, they both surpass the five-minute mark and end up being almost five times the length of some of the other band's total track time.

Pre-order the 4-Way Split 12" from the following labels:

"Everyone i know is a broken heart"

Holy shit, what a song. Slow, brooding and epic with strained, dark screams, its beautiful bits are the counterweight to its destruction. Expect a lot of ins and outs, daunting precipices and swelling transitions that rise up only to topple down. In terms of band comparisons A Day In Black And White meets Envy is the best I've got, as EF'IL is definitely its own beast.

Reaching nearly seven minutes, this thing begins disjointed, chaotic and screamy, bearing some resemblance to fellow Malaysians Daighila. That space riff over the minute mark is fucking phenomenal and is something I'd expect outta Jesse Mowery on acid. There's a lot of emphasis on the bass and drums with the occasional huge riff ala Russian Circles, and that finale is very Mono-esque.

link to next blog in the PremieRing by doing a good 'ole pic-click or just click here
Posted by Dave Norman at 06:54