First things first, TO BE GENTLE will be playing Zegema Beach Records Fest 2020! 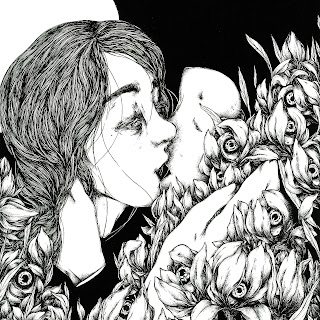 Phew, now that that's outta the way I can actually focus on this review. I first heard California's TO BE GENTLE when Jake Beeker sent me their debut LP before it was released. I enjoyed it, but it wasn't something I revisited often. Then Jake sent me their new EP 'L'autre Côté de la Peur' a week or two before its release and I had was shocked at the progression, especially considering the band has only been around since December of 2017.

In April of 2018 the band released a digital single 'One Day We Will No Longer Hurt (Demo)' which later appeared on their LP, as do both songs "Tender Green" and "That Which Is Safe" on their 'thisisasummaryofwhoiam split'...so I'm just gonna jump to that. 'To Be Gentle' opens with an ambient introduction before "All the Things I Was Too Scared To Say" sets the tone of the record. It's moving, driving, melodic, atmospheric, emotional, and it does what it set out to do well. I find by the end of the LP that my attention is waning but I'm a picky piece of shit, and there are some excellent songs besides the second track including "Tender Green" (excellent, crunchy midsection), "Amputation" (great vocals), "That Which is Safe" (perfect balance of soft and screamy) and "The Hand That Rests On My Shoulder" (dark, groovy, with an important message). I think in the end it's just a tad too long and it lacks the punch I hear on the new EP. And that EP packs one helluva punch, so enough delaying, David.

'L'autre Côté de la Peur' is fucking amazing, plain and simple. After jamming the first track "Flesh and Blood, Bone and Dream" it is blatantly obvious that the band stepped up their game and beefed the shit out of their songwriting, as this thing has some seriously heavy elements not present in all material preceding. They start packing a punch at around 1:30 but by two minutes we are met with some seriously growly vocals that lead the track into its massive second half. At 2:53 there's a gorgeous transition and guitar lead swept in and out by the bass and drums, creating a truly mesmerizing climax to an incredible opener. Think that was good? Well fuck you here comes "If You Are Reading This", my essential TO BE GENTLE tune. This this is pretty hefty at 7:15, opting for a relatively quick, brooding intro not unlike Envy that eventually explodes like a bomb come 1:50. The dark, isolated and sinister feeling of the music is perfectly encapsulated by the next section, and shows up often as a intentional-or-not theme. During the third minute the bass and drums click on a level that is beyond explanation, and the song really hits its second peak by the four-minute mark. Think that's it? Ahahahaha fuck no. At 5:24 the guitar slides around before locking in with the bass and drums with scattered screams, reaching an ultimate climax at 6:39 that is beyond mammoth. Tracks three and four are pretty good, but pale in comparison to those sandwiching them. Closer and by far the most epic of any TO BE GENTLE song is "The Thought of Losing You Terrifies Me". This is led by an extended intro that bows out around 3:45 and makes way for rapid-fire drums and general chaos that somehow maintains its speed and intensity for nearly two minutes. At 5:30 we dip back into what I consider new/perfect TO BE GENTLE as the soothing, spacey guitar progression hooks cavernous bass riffs, thunderous drums and heart wrenching screams to create a new beast that is as beautiful as it is dangerous. There's also the vocal line that permeates through everything, "The though of losing you terrifies me!"

(2018) TO BE GENTLE - "That Which is Safe" (from 'thisisasummaryofwhoiam' split)

(2018) TO BE GENTLE - "Tender Green" (from 'thisisasummaryofwhoiam' split)

TO BE GENTLE additional links