Label(s): A lot including majors...now Epitaph, I think?

Had I written this review around 15 years ago it would be long-winded, annoyingly complimentary and I probably would have let the religion angle slide. But I'm almost 40 and I just watched the new THRICE video and was bored senseless.

I can still look back at the 'Identity Crisis', 'Illusion of Safety' and 'The Artist in the Ambulance' with fondness, but after that my fanatic fan level dropped off substantially and I spent my time on what I consider much more consistent and non-religious music like Cave In, Nada Surf and screamo in general. So I will be focusing most of my review on those three records, with a few song mentions afterward, as well as a some completely irrelevant stories from my past that involve THRICE.

When did I start screaming? Well, it was when I was obsessed with the first THRICE album 'Identity Crisis' and was jamming "Phoenix Ignition" on repeat, so when my parents weren't home I'd crank my cd player to max and stand right in front of the speakers, screaming back at them, trying to practice my own scream. Thankfully it paid off, as I've now contributed vocals to nearly 100 songs and have played more than a handful of shows. Thank you, THRICE.

There's also that time I went to a show and saw them live. It was awesome. I played bass at the time and had learnt "Phoenix Ignition", so at the show I nearly gathered the nerve to ask the bassist if I could try playing it live, but thankfully I came to my senses and didn't ask such a silly question of someone.

Remember when THRICE released the studio footage of "Paper Tigers" for the first time? Holy fuck I seriously watched that an obscene amount of times, and the track holds up to this day. Let's see if I can find it online. Mmmmmm fuck that, already wasted a few minutes looking. Not worth it.

I grew up in the same town as Protest The Hero and my brother was best friends with a few of the members. We listened to THRICE all the time. As Protest got bigger and bigger and started playing more metal, I found myself missing the THRICE influence, as well as those incredible Choke homages. In the off chance you didn't know, relatively early Protest material was almost primarily influenced by THRICE as Luke Hoskin was a massive fan.

Enough reminiscing. I first heard 'Identity Crisis'...wait, that's reminiscing. 'Identity Crisis' was released 20 years ago, in 2000, on Sub City Records which was later picked up by Hopeless Records. The crunchy, palm-muted, title-track opener "Identity Crisis" keeps things melodic for the first 50 seconds before showing their love for screamy metallic hardcore. Personal favourite "Phoenix Ignition" is next, tricking the listener during the opening 30 seconds with an acoustic, dare I say country intro. Now, for someone who liked punk rock and Death By Stereo, this was officially the greatest thing I had heard at that time in my life and exactly what I wanted from my music. Especially that closing, holy fuck. Come 2:45 the song gets pretty huge with a pretty sick breakdown, which may or may not be an audio nod to Unearth. "To What End" and "Ultra Blue" are strong melodic hardcore tracks but pale in comparison to the almighty "A Torch to End All Torches". This behemoth begins in Slayer fashion with war drums, metal palm-muting and an eventual breakdown with some sweet screaming over top as well as an epic final minute.

Looking for the THRICE album? Well look no further than the band's sophomore full length 'The Illusion of Safety', cuz this is the peak. Not just for the band, but for melodic/metallic hardcore with singing and screaming. It peaked here and I eventually lost interest. But Dave...peaked? Yes. Peaked. With no weak tracks and a few songs that are beyond amazing that have already stood the test of time, it's obvious why they influenced so many people back then. I'd probably say this is in my top 10 for most influential albums of my life. 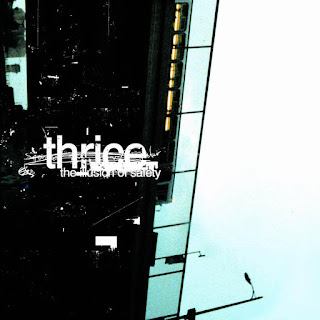 The masterpiece known as 'The Illusion of Safety' opens with the stellar "Kill Me Quickly", the perfect concoction of melodic hardcore and mathy, screamy, breakdown-heavy metal. The transition at 1:30 and subsequent bass progression is outta this world, and when combined with dual guitar-tapping...hot damn. And then there's the sing-a-long outro with some serious double-bass. Not a shabby start. And what's next? Oh, just one of the heaviest, fastest songs ever recorded by the band. "A Subtle Dagger" is 1:49 of blazing riffs, screaming and the occasional sung section, making it one of the band's best tracks. The album's first single was "Betrayal is a Symptom", and whoever made that call was correct as it's a great mixture of the band's catchy, melodic side and earth-shattering, bass-heavy screaming side. Wonderfully hypnotic bass and drums lead the track in before they cut out and Teppei's lone guitar washes in, not unlike Refused. The song then bounces around with cavernous hardcore before hitting an infectious groove at chorus-time, shifting back and forth seamlessly between the two. Fan-favourite "Deadbolt" is next, and when played the speedy-yet-very-singable single live it included a crushing outro that never made it onto the record. My brother played this song incessantly, and I was fine with it, as it seemed to be the most impressionable song on one young Lucas Hoskin. "The Red Death" literally sounds like the initial descent of a plague, with the vast administering coming in the song's conclusion from 1:40 to 2:15. "Where Idols Once Stood" is a fucking banger with a lone line of "I'll draw the shades and stay inside" screamed desperately before a prodigious breakdown tears the song apart. "Trust" is the opposite, a slow serenade (by THRICE standards, so it's still relatively fast and a punk song) about Dustin proposing to his partner, if I remember correctly. And then there is "To Awake and Avenge the Dead", the should-be closer of the record. The guitars get seriously shreddy come 47 seconds and stop/start bass and drums bring the whole thing together, making the menacing vocals icing on the cake. The final 40 seconds are also immense and mathematically interesting, catapulting this song into the top three fer sure. Whoooo weee what an album...and those are just the really really good songs.

Now there's some beef I got at this juncture, as the band scrapped one of the best songs recorded in the 'The Illusion of Safety' sessions and dumped it as the last track on a Hopeless Records compilation. I think the reasoning was that it was written last or in the studio and it may have been too heavy, or something. At least they didn't repeat the mistake on the next album, as "Paper Tigers" came together in almost the same way. The track I'm referring to is called "Hideous Strength" and it's a fucking ripper. The screaming and guitars in the verses are reminiscent of "A Subtle Dagger", and it dips in and out of chuggy thrashing until the 50-second mark when the poppier side of the band presents itself and helps balance the song before it rips the listener apart again at 1:30. There's also a sick solo to close it out, complete with a massive breakdown and fantastic screaming.

In 2003 shit got a bit strange (in a good way, mind you) as both THRICE and Thursday signed to Island Records. After some concern, I heard "Paper Tigers" and decided it didn't make a lick of difference, and I was right, as both 'The Artist in the Ambulance' and Thursday's 'War All the Time' are excellent, with the latter being the best that Thursday released in my opinion. THRICE's major label debut opens with "Cold Cash and Colder Hearts". It is excellent in both lyrical content (fuck the rich) and in execution as the melodic-yet-aggressive majority leads to a very fulfilling climax for the final third of the track. Exceptional metal wizardry can be found on "Under a Killing Moon", most notably in the same spot as the previous track, as everything culminates in the final 40 seconds. "Silhouette", "Hoods on Peregrine", "The Melting Point of Wax", "The Abolition of Man" and "Don't Tell and We Won't Ask" are all good songs too, but it's "Paper Tigers" man, Paper the fuck Tigers. Track six doesn't waste much time before delving into the first verse full-force, accentuating very crunchy guitars and pitch harmonics. The chorus overlaps distant singing over the screaming as well as some seriously sick bass.

After this point I got hard into screamo, and as the band softened up more and more I found myself sadly drifting away from THRICE. 2005's 'Vheissu' hinted rather obviously at the band's intended slowdown, although they kinda hit the mark on "The Earth Will Shake", "Hold Fast Hope" and "Like Moths to Flame". I don't know if they were balancing their Radiohead intake with Nickelback, but there are some pretty questionable vocal moments in my opinion, and Lisa's too.

In 2007 and 2008 the band released back-to-back double EPs...so two full lengths? lol that's kinda confusing. The first, 'The Alchemy Index Vols. I & II: Fire & Water' houses "The Messenger", which is the only track worth my time out of 12 songs. A substantial drop in ratio of awesomeness to smelling slightly off. The second installment doubles the good tracks to a whopping...two. "Digging My Own Grave" is a piano and snapping-driven track that is different and decent enough to check out, but it's no banger :( "The Earth Isn't Humming" is a Frodus cover of one of my favourite tunes, and it's acoustic. And it's good. So let's quit while we're ahead.

In 2009 and 2011 they released two more albums but this review is long so and getting kinda negative so check out "The Weight" from 'Beggars' and "Promises", "Blinded" and "Anthology" from 'Major/Minor'.

then I officially stopped following them. Still wanna hear more THRICE-like material? Go check out In Reverent Fear, that band was awesome. Then...they sucked. But first they were awesome. Check the review here.