I came across BLUEFLOWERREDTHORNS recently and thought I'd share a quick review of this obscure Ohio band active in the early 2000s. They self-released two EPs and one split with Roads Without Ends and played raw, dark, sludgy hardcore with elements of screamo.

Their 2002 debut 'Summer Demos '02' contains four short tracks ranging from 48 seconds to 1:38. Perhaps I'm remembering incorrectly, but this reminds me of very early Capsule material before they busted out the math textbooks and stopwatches. The switchover 45 seconds in to "Something You Wouldn't Recognize" as well as those chuggy bits are pretty sweet, and I love the anguished vocals in "Help Us, Save Us". 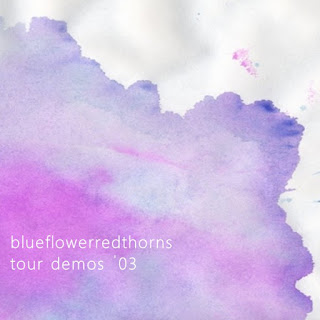 The following year came a cdrom EP titled 'Tour Demos '03', this time housing three tunes that hover around a minute in length. These songs are much more varied and incorporate more dynamic song structures than their first demo, which is blatantly obvious upon the opening of "From the Doorknobs Down". This track also ends on a high note, bringing a pretty sick breakdown to the table. The dual vocals in "Nice Boulder" have an excellent back-and-forth to them, with this track also having a ridiculous end to it. Closer "Minnesota Miracle Man" is much more in line with their first release so I find it a bit out of place.

BLUEFLOWERREDTHORNS' final release came by way of a split cdrom with Roads Without Ends. These two tracks tally a measly 1:38 when combined, but the first track "Gutcheck" goes pretty hard come 34 seconds and weaves in some cool guitar interplay to close it out. The latter track "Exactly The Way It Was" is a ripper and will blast your face off before closing with a funny little audio clip.

Nothing exceptional, but a cool band to check out if you like the for fans of list and want something more.