Like a lot of posts seem to begin, I first heard about BIG WATER through my label buddy Bobby Johnson from The Ghost Is Clear Records. We developed a rapport back in the early days of Zegema Beach when we coreleased two amazing/overlooked releases by Cassilis and Seventeen Again, and this is our first corelease since then, with at least five more in the pipe!

Anyhoos, I jammed their EP (pre-release) and quickly decided to hop on helping with the cassette, as the Kansas City three-piece bang out six seriously discordant, dirty and screamy jams that fans of Snag, People's Temple Project, Slow Fire Pistol and Ten Grand/Vida Blue should be salivating over. Following a quick review by yours truly, the band was kind enough to give us a track-by-track breakdown of the 'Drink More Water' EP. Be sure to pick up a copy from The Ghost Is Clear here or Zegema Beach (Canada store here / U.S.A. store here).

So, the band's debut material housed on the 'Drink More Water' cassette EP is, to put it bluntly, fuckin' sick. Opening with the absolute beast of a track in "B.M.", this track is fucking awesome. It wastes no time and reaches full speed right from the get-go, complete with crashing drums, hyperactive bass, frenzied strumming and thick, broken screams. At 42 seconds the song transitions into a palm muted build that'll get your blood pumping, and by 53 seconds it has morphed into a an extremely driving, slightly jarring beast of section that brings older, playful, dancier screamo jams like Robots Don't Cry, D'Amore, Daniel Striped Tiger and Sometimes Walking, Sometimes Running.  "My Name is Chappie Johnson and I Can't Open This Damn Pickle Jar" is exactly one minute of writhing stop/starts, frantically punctuated double notes and a bunch of screaming. By track three we begin to see longer songs, with the next few clocking in at more than two minutes instead a minute and change, as "Typical Porn" hits more Daniel Striped Tiger and Wolves than anything else. There is a twinkly slowdown with gang vocals at 51 seconds that lead to powerful midsection with a cacaphony of noise, held together by some pretty exceptional drumming. "Highest Number is 24" is the loner of the EP, as it throws around some wild and wacky singing that gives the song a bit of a country vibe, although the rest of the song is typical BIG WATER and boasts some sick bass riffs. "Half-Eatin' Sandwich" is another of my favourite jams from this debut, as it has a bunch of jaw-dropping parts. The introductory instrumentals are driving and chaotic, likely leaving you excited and wanting do dance. It then shifts at 26 seconds with a pulsating section led by a twinkly guitar, rolling drums and sassy/shouted vocals that help lead the slow/fast dichotomy that is abandoned at 54 seconds as the band grabs the riff by the balls and rides it around whilst palm-muting the fuck out of the midsection. The song then moves into another one of their patented dark swings which will have you swaying violently before it eventually exhausts itself. Phenomenal tune, good god. If there's an extreme mashing of their extremes it's gotta be closer "Drunk Punch Love" and the mudskippin' flip-flops of melodic noodling and chaotic clusterfucks.

The band is currently writing an LP but took the time to discuss the meaning behind each of their songs, which you can read below. 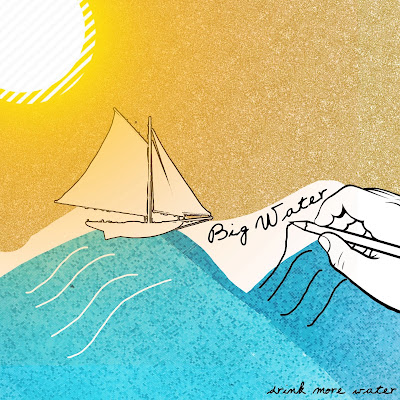 "B.M."
We still don’t really know what B.M. stand for. It’s kind of a catch all of things we all enjoy. Black & Milds, Black Metal, Big Money, Big Mistakes. The list could go on. A lot of the theme of this song comes from Big Mistakes though. I felt very much in a cloud when I wrote these lyrics. Always fucking up, always saying something wrong, always feeling like I was wasting my time or someone else’s time. Something felt like it was shrouding my insights to the point I felt like I was drowning. That’s where the last line of “drinking. sinking. I don’t really like how this feels” came about.

"my name is chappie johnson and i can’t open this damn pickle jar"
About every line (as well as the title) in this song is taken from Season 9 Episode 2 of Curb Your Enthusiasm. Also known as “the pickle jar gambit”. Within this episode Larry David points out a very true reality we must face. Everybody wants to be the hero. Everybody wants to the spotlight. Everybody wants their 15 seconds of fame. What damage does that do?

"The highest number is 24"
This song is a reference to a Mr. Show skit (duh). At the moment i’m writing this. I turn 24 in 10 days. Thus the reference meant something more personal to me. What does the next year of my life have in store for me? What is going to be so different than the mediocre year that was 23? What can I take? What CAN’T I take? It’s about accepting what's in front of you. Sometimes things work out for the best, and sometimes they collapse right before your eyes. What’s the difference? You win some, you lose some.

"Half-eatin' sandwich"
Let go of things that hold you down. Free yourself from everyday burdens. Dig your hole as deep as you want to. You are stuck with this life whether you like it or not. You can’t lose if you don’t try to win. Remember that.

"Drunk Punch Love"
People will go to any lengths to justify their shitty acts and behavior in the name of self-righteousness. This song pulls a lot from witnessing that behavior unfold around me. How some people are so oblivious to the pain they cause baffles me. The last line is pulled from a poem I wrote years ago. I felt it summed up my feelings quite succinctly.

song premiere on This Noise Is Ours