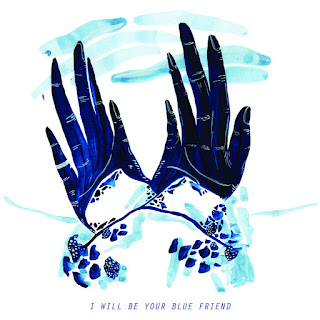 Like most people, I heard of BLUE FRIEND when they released a split on Middle Man and Meatcube then joined the Dog Knights roster and promptly released a sick LP by the name of 'I Will Be Your Blue Friend' that gave me early Loma Prieta feels right from the get-go. Nothing has been released since 2015 when the band when on hiatus, but be sure to comb through the discography because it's excellent Japanese screamo for fans of Yarmulke, Sans Visage, Sto Cosi Cosi and Elle.

Trying to go through this band's discography is actually a bit of a chore, as songs were released on numerous splits that mostly all ended up on the LP, and a few other songs ended up on more than one split. So what you need to know is this. First, BLUE FRIEND released a five-way split in 2012 with From Ten To Nine, Cofun, Kanataharuka and None But Air, with the same songs showing up a year later on the Virginia On Duty, Pathos and Sjanse split. A four-song demo cd was released in 2014 that bled into the LP 'I Will Be Your Blue Friend' which was released the same year, as was the split with Asthenia and Calculator whose songs were repeated on the Dog Knights 7" 'Home/Violence'. Lastly, the band released a final split with KMKMS in 2015 with their final four incredible tracks.

On 'I Will Be Your Blue Friend', their only full length, BLUE FRIEND opens with a quick ambient intro before kicking ass on "Midikai". The dips in and out of chaos and beauty are excellent, and ya know Dave loves dem dual vox hooooooeeeee! "Warui" and "Kowai" are quick, each only taking up a-minute-and-a-half but I'll be damned if there lack of length detracts from their intensity. "Neri" is pretty lengthy at 3:48 and opens with some of the chuggiest, heavy material the band recorded, but it's still Japanese screamo so the melodies and musicianship shines through, making it a prime example of perfectly straddling two extremes. That jazzy section come two minutes is the kicker, for sure. "Aida" is another interlude, this one set to a guitar progression and a distant piano followed by "Mezura-C", another jazzy song with excellent axe interplay and many a nod to poppier music whilst still retaining a screamo demeanor. The groove that the song settles into during the second half is fanfuckingtastic, making it one of the best songs on here, despite the fact that there are so many. "Dasai" had been kicking around for a few years at this point but that doesn't mean the final album version isn't a beauty to behold. The climbing intro is a head bobber for sure, peaking at 1:20 and sounding a hell of a lot like Beau Navire and Elle. That switchover at 2:05 is fucking epic and probably my favourite part of the entire record. "Saisho" begins in full swing with light, quick guitar strums and one seriously dancey beat, perhaps making it the most accessible song here. Closing, ambient track "Musubi" is a nice, calming cooldown after a whole lotta hot shit.

Both songs on the 'Home/Violence' EP are excellent, albeit kinda poor in the recording/mastering job as the guitars sound pretty airy and light, but considering how well the songs are constructed I still love'em. "Home" is the shorter of the two, but it's still nearly four minutes in length which is longer than almost every other BLUE FRIEND song. There's a sick faux-climax 43 seconds in that opts for a jazzy section before some epic call and response, and a great swing at 1:40. "Violence" is a whopping 5:58 and very aptly named, as it's much darker and claustrophobic, despite the length. The shift at two minutes is fantastic, and the subsequent hi-hat work gets me every time. At 3:20 shit gets pretty heavy and at 3:31 it progresses into a whirlwind of screaming and dizzying guitar cycles.

The final four BLUE FRIEND songs housed on the 'KMKMS split' are really freakin' good. "Walk" is a chill, semi-spoken word intro that I wish was longer than 47 seconds. "Light" may only be 14 seconds longer, but holy smokes do they pack a ton into this lightning bolt of a song. "Sea" is exseallent (boo-urns), boasting dueling guitars that break into one of those sick dancey sections complete with some call-and-response shouted vocals. Closer "Life!" is my favourite of the four, as rides a majestic wave of feedback before breaking into an infectious stop/start that reminds me a bit of legendary French band Daitro. After the first minute there's a very shrieky slowdown ultimately leads to a truly sensational harmony between the guitars amidst a mini-breakdown and a whole lotta screamin'. You can't ask for a better end to a discography than that.