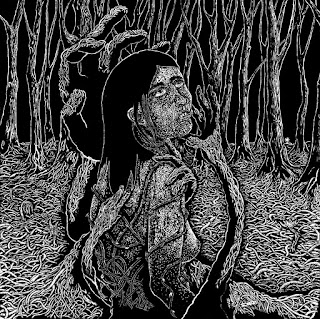 CLOSET WITCH is kinda blowing up, yes? I remember hearing about them tearing up shows in 2014 and 2015 but it wasn't until their most recent LP 'Closet Witch' that was released last year (and made my Best Of 2018 list) that I went from hearing about them to seeing them everywhere. Considering how good their music is and how hard they've worked, I'd say this is well deserved attention. Since 2014 they have been playing caustic, venomous, violent and thought-provoking grind/hardcore/metal and each release has seen steady improvement to the point where there isn't too much more to refine.

Their 'Demo 2014' debut is only two songs, but they both blast out of the speakers with such ferocity that you'll need take a quick vacation from music while your ears recuperate. "Great River Medical Center" seems to bear a bit more resemblance to bands like Phoenix Bodies, Discordance Axis and Arsen, but "Secane" ties in much more atmosphere, restraint and is nearly four times the length.

2015 was a very busy year for CLOSET WITCH. Their first of three releases was the 'Ergot' EP which contains five dark and nightmarish songs (including a Black Flag cover) unleashed in March. It opens with a rerecorded version of "Great River Medical Center" and it sounds fantastic. It's way bassier and those throat-shredding screams are much more audible. "Teen Rot" is simultaneously bouncy and acidic, as it straddles a few genres but does so in true CLOSET WITCH fashion, which is to say amazing, but my personal favourite just might be "Once Desolate Now Omega" which is the audio equivalent of a pack of werewolves tearing people apart. In October they released the 'Black Salt' EP, this time housing five tracks as well as a Nirvana cover. The title track is first and is over in 19 seconds, leaving the listener with a slight concussion before the onslaught that is "Ode to Queen Doris" begins and decimates everything within earshot, "Once Upon A Time" is another bass-in-the-face track that gets pretty hellish come 40 seconds, and it's probably noteworthy that "Secane" from the 'Demo' shows up here. Their final release of 2015 came in December and are three songs that combine for a whopping 1:01. An hour and a minute? No. A minute and a second. This thing will be over before you have time to load up your Locust record as a retort. As you can imagine, each song is between 13 and 30 seconds of 100% rage.

It was CLOSET WITCH's 2017 'Euth split' that first introduced me to the band. Their three songs here were the perfect time for a listener to jump on board, as the production and recordings were refined to the point of perfection. Opener "Funeral Regrets" paints a poisonous picture and closer "Nekhbet" is a quintessential song by the band, but it's the short and destructively bombastic "Civil Necessity" that wows me the most. This split sounds like CLOSET WITCH, but it's their 2018 LP that is CLOSET WITCH.

Yep, that 2018 self titled 'Closet Witch' full length is utterly ridiculous. Truly a coming out party for the band, they nailed it in 13 tracks. There is so much to love here I'm not going to go through track-by-track, but I can definitely say that the balance of repetition and chaos is uncanny, while the vocals are among some of the best in heavy music. I've seen videos of these songs live (such as the live @HateSix, embedded below) so I am itching to catch them ruin my life. There isn't a weak song here, but there are a few highlights on this absolute banger that rise a bit above the rest. Opener "Blood Orange" deserves some love, for after a rabid first half the song hits a breakdown at 1:15 that is unreal. The vocals shift from barked to shrieked and there's an additional guitar hook layered over the devastation, and I fucking love it. "Moonstomp" tears its leash at the 26-second mark and then shreds the jugular, not unlike "It Doesn't Feel Free" which also incorporates a killer Bucket Full Of Teeth-esque ending by use of a repeating guitar phaser. "Rule By Bacon" is unrelenting and perhaps my favourite song by the band. After going full-tilt they slow it down a bit at the one-minute mark but continue to pound the listener until another phenomenal shift at around 1:53 when there's a push to climax using an excellent stop/start method with unbelievable drums and more screams torn straight from the depths of hell. There's also "Wind Whispers" which takes a righteous turn at 36 seconds, then one-ups that at 52 seconds and again at 1:07, creating a punishing, successive behemoth that will have your parents fucking disgusted.

Well there you have it, a bunch of amazing, threatening and cathartic grindy hardcore that'll leave you with third degree burns.