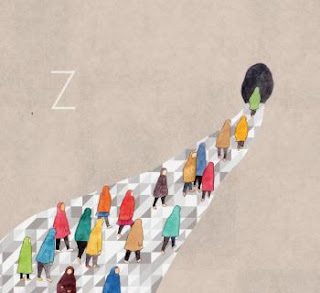 I'm pretty sure I found out about ZDZIS LAW through my friend Guitalex (Alex/guitar from Nous Étions) after we both discussed our love of Japan's Poetry Of Torch, whom apparently share at least one member with this band. While Poetry Of Torch is extreme and noisy, ZDZIS LAW takes a more melodic approach to screamo, giving them a sound similar to fellow Japanese bands Blue Friend, Yarmulke and Komusō. Their songs are generally only 1-2 mins in length and certainly are packed full of twists and turns, but their ability to stay rooted in semi-repetitive swings sets them apart from the more abrasive Japanese stuff.

Following the band's history was a bit of a task, but from what I can gather they started releasing in 2011 with their 'Demo' cd which may or may not be a self-titled release, a single track in 2013 (an 'Untitled' demo song), then dropped the fantastic 'HerLens split' in 2014, followed by some practice songs from a digital released called 'untitled' in 2015. I saw they played a show in 2016 so they didn't break up until then, at the earliest.

So let's quickly look at their first demo, titled 'Zdzis Law' (I think). These five songs are much lengthier than their later material, as the first song alone is over four minutes while later releases tended to be one-to-two minutes in length. The aforementioned opener "Sympathy Where It Loses" is a powerful screamo tune, opting for a solid-yet-moody foundation instead of chaos and speed. "saMsAra" is only 1:20 but packs double the punch that the opener is able to, bringing in more of an emo-violence feel that could be likened to bands such as Craneo and Caitlyn Bailey. "Compass" is a disjointed stop/start fest that most certainly brings Malaysian screamo to mind, "Revelation That Restrains Idea" is the shortest/fastest track and boasts exceptional drumming, while the closer "Scapegoat" is an epic, spacey closer that shows some of the tangents that can be found on later releases.

We'll skip the 2013 "Untitled" song as it's just a demo or unmastered version of "Nothingness" from the 'HerLens split', which we'll run through now. There are five songs by ZDZIS LAW here and they are all worth a gander. Opener "Denial of Sea" feels like straight-up Blue Friend and Sans Visage worship which is fine by me. The song rattles around with a positive vibe and some jazzy guitars, kind of like I Love Your Lifestyle if they played Japanese screamo...wait, should I just say it sounds like Hue then? "Nothingness" and "The Wedge Can't Pull Out" are next and are both twice as fast as the opener, bearing more resemblance to early Loma Prieta and Danse Macabre, as those drums are frantic as fuck and the vocals take on a harsher vibe. "Three Minutes City" gets pretty dancey halfway through and twinkles enough at points to make me think they were jamming some Swedish screamo on top of their home influences. Closer "Laugh Pointing" seems tame enough for the first 20 seconds but then it eats a ton of sugar and becomes hyperactive and chaotic, utilizing dual screams and unpredictable shifts, all in just 1:01.

The band's final songs surfaced in 2015, from the look of things. They are listed as "practice" and therefore my guess is these are jamspace recordings. "Hazard City" and "The Only Cure is Dying" sound a lot like Poetry Of Torch (so it's noisy and violent) which isn't really much of a surprise considering they shared a member. The final song is called "30secs" and obviously is not finished, but it sounds pretty fucking sick, and is very German emo-violence.

So there you have an incorrect, partially fabricated discography review from yours truly. You're welcome/sorry, it's the best I can do.