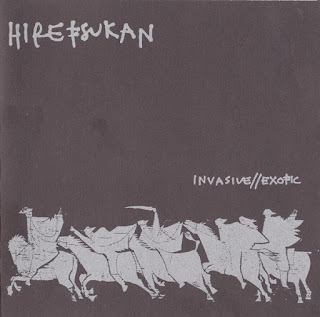 I first discovered HIRETSUKAN during a podcast with Adrian of Alder & Ash when he played me "9 Year Barrier". And I was floored. And it was released on G7 Welcoming Committee to boot? Fuuuuuck yes. It is screamo, but not traditionally so. First off, those vocals are something fierce, hitting a venomous, rabid and poignant scream that borders on a shriek. A pretty decent modern comparison (as this band existed 15-20 years ago) would be Nuvolascura and Cady. The instrumentals are an interesting mix of punk, rock and hardcore that certainly peeks into the post-hardcore realm, with Touche Amore and...y'know what? I can't think of a good instrumental comparison.

The band has a 'Brown Bag Demo' that I have yet to find or hear, and I've seen that it was released in both 1998 and 2000...so who knows. In 2002 they released the still available 'Invasive//Exotic', a very short and angry seven-track EP. It opens with the 1:08 blast also known as "Lender of the Last", a whirlwind of anger and venom, especially in the vocal delivery department. "Michael Cosgrove" and "Driver" are also pretty short and clock in at around a minute-and-a-half, with the former getting pretty epic at the 35-second mark, utilizing multiple vocalists, and including what I can only describe as a jungle-drum transition. "Driver" is much heavier and chaotic with a notable Blood Brothers comparison, making this one of the strongest songs HIRETSUKAN ever concocted. Speaking of awesome songs, track three's "Barrel Roll" clocks in at as many minutes and is the complete song here. It's chock-full of ear-piercing shrieks, call-and-response vocals, and epic-punk/post-hardcore instrumentals, perhaps making it the closest thing to the sound perfected on their final LP.

Speaking of their final LP, it was recorded well after the band's 2002 tour, subsequent breakup and reformation at the behest of G7 Welcoming Committtee. So it was in 2005 that HIRETSUKAN released 'End States' to pretty widespread acclaim. Opener "Circling Boy" wastes no time in letting you know that the band hasn't taken their hand off the throttle, because it rips through in just 1:46. Then there's "Her Article", a beautifully orchestrated screamy hardcore jam with lyrics well-worth your time. My personal favourite is the pure rage behind "I cannot believe the shit that you say," on "Click and Repeat", the shortest and perhaps most anthemic track on the LP. "Wellwisher" has some mean chugs and is another prime example of the band taking their sound to the next level whilst keeping everything I loved from the first EP. The shifts and flow of "Hauling Sharp" hook me like a fish every time, as do the sweetly sung vocals in "9 Year Barrier" and the gorgeous, sweeping guitars in "Placement Services".

Overall this band did some seriously amazing work in every single department. I cannot believe I slept so long on this band. David...FOR SHAME!!! 😏