In January of 2015 I went to the Austin Blood Alliance Fest in Texas. While I was there with my good friend Tony of Congratulations I was approached by a member or two of CELEBRATION. After a brief and friendly exchange I ran into an issue of mixing up those band names on a pretty consistent basis. Well I don't need to worry about that anymore, as the band recently changed their name to NERVER and after releasing a sick tune (on the 'Meditations in Affinity' series that I'm doing with Bobby of The Ghost Is Clear Records) I've had the pleasure of hearing their new full length and it's a fucking banger, holy shit.

Let's go back quickly, shall we? In 2014 CELEBRATION was doing the shrieky emo-violence thing and they did it swimmingly. Their debut four-song EP 'Sompting' begins with a Simpsons-reference track "To pronounce it correctly, i would have to pull out your tongue" which is a dark, multi-screamed attack that is over in just 1:32...making it the longest song here. "Unscannable!" is a clusterfuck in less than a minute bearing resemblance to their Atlanta friends Under A Sky So Blue and earlier Senza material. "If i'm dead, you guys have been dead for weeks" is much thicker and is perhaps reminiscent of the material that permeates the 'Shook' EP, while closer "Love my canyons" is pretty abrasive and heavy, reminding me most of early Straight No Chaser and Mara'akate.

The following year a decent song titled "The Soil is Not Clean" was given exclusively to the 'Follow the Rules' compilation tape put out by Friendly Otter, followed by three more tunes on  a 'split 7" w/Under A Sky So Blue'. Opener "Gouge it out!" is an assault on the senses in just 30 seconds, complete with a short clip from Punch Drunk Love. "I can hear them calling to me from hell" is fucking massive, swelling like a crashing like a violent storm. The first 30 seconds will rip your face off, followed by nearly a minute of call-and-response screaming that winds the track down to its 1:37 close. The final song is "Forgive me, Lisa. There's a monster inside of me." is another short banger that again reminds me of Senza, albeit condensed and much shorter.

In 2017 they dropped what I would consider their best work, the self-released 'Shook' cassette EP (which we premiered on OMSB right here). I didn't expect this sonic shift in the band's style, but it quickly grew on me and surpassed the shrieky screamo that I oh-so generally turn to. All of the songs are much more on the dirty southern hardcore side rather than the shrieky emo-violence one, and although they all pack a punch there are a few tunes that are next level. The first is opener "Degloved" which opens with a lone, repeating guitar before the rest of the band chimes in on its second pass, creating a devastating introduction to a truly gritty, dirty and pummeling hardcore record. There's a chug stop/start at 40 seconds that transitions into a quick little four-note diddle that gets a sprawling grin from me on every listen. Oh, and the last 50 seconds resembles what I would assume playing doomy hardcore whilst getting drunk in a cave would sound like. "In the Dream" is another premium pick, as it brings the heat with a very catchy progression that is littered throughout the 1:28 tenure. But it's the behemoth section at 48 seconds that brings me to my knees every time as those apocalyptic instrumentals flush the streets of any life, leaving just the band members screaming over top of one another. The other jawdropper is track five's "Follow the Heat" during which the band cuts to silence and drops in a lone palm mute over a Tommy Lee Jones clip, then chimes back in to close out the track.

In 2018 CELEBRATION released their final tracks as said band with a two-song 'Tour Cassingle' in 2018 with a song called "Congratulations" and a Scratch Acid cover. The exclusive new track is 2:50 in length and rank with slurred vocals and sticky, sludge-covered riffs, opting for a noticeably slower, trippier approach to its digestion. The cover of "She Said" is ripe with CELEBRATION scent, and is an excellent choice.

The final song written as CELEBRATION was "A General Erosion of Morale" but released under the new name NERVER. This song sounds like the bridge from 'Shook' to the new LP so be sure to give this a spin (and pick up the 4-way split 7" with yours truly on it) if you haven't already. It is the opening track to the second in the 7" series 'Meditations in Affinity: Cultivation 4-way split' and is an obvious choice to get things started. It's a fucking ripper, delving right in after patented CELEBRATION/NERVER style with a lone guitar that soon crashes into the entire band. Early on there's a wicked line of "you're giving us the eyyyyeeeeeee!" and then shit goes bananas and at 45 seconds we are graced with a chuggy buildup that gets more epic than anything CELEBRATION ever did before the first minute is even over.

Sometime in late 2019 or early 2020 you'll witness the ravage beast that is NERVER's new LP, but until then you can catch them on tour, including a ridiculousness show tonight! (October 30th, 2019) NERVER plays with some incredible bands Frail Body and Niboowin, as well as Evan's related act Rifle Cult. Check out the event here. 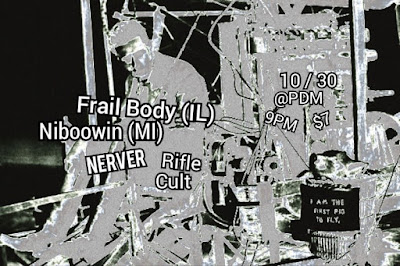