I don't really know what to say. This experience was amazing. Stressful. Inspiring. Monetarily...not great. But bottom line, the entire weekend was fantastic. It was great to see the screamo folks come out and gush over the bands. The sense of community was palpable. The music was surreal. Literally every single person in every band was beautiful and kind and positive. There are too many key thank yous to try and make a list, so I want to say I appreciate literally everyone there, and everything you did to make it such a heartwarming festival. See you first week of June, 2020. 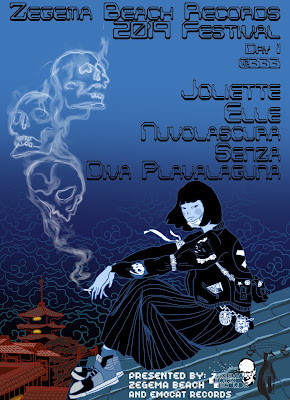 DIVA PLAVALAGUNA
The only local band/Canadian band of the night, featuring three members (two of whom cohosted the fest). Their sassy, quirky and screamy songs can most definitely be likened to Johnny Whitney related bands, especially The Blood Brothers.


SENZA
Oh my fucking god. Oregon's SENZA killed it. The crowd got hard into it. The top of a head flew off. No vocal mics were used. Everyone had Senza shirts the rest of the fest. This is their full set. Grab their new 12" 'Even A Worm Will Turn' below.

NUVOLASCURA
California's NUVOLASCURA was easily one of the bands I was most excited to see, so of course I misplaced the video camera during this set and was forced to use my cellphone to capture three songs, but unfortunately the sound isn't the best. Regardless, you can hear the intensity, the set was amazing, and there's just something special about a bunch of hair flying around during a set. We have like 18 copies of their 12" left...just so ya know.

ELLE
I was already pumped to see California's ELLE, but after hearing their new 12"LP (ZBR was asked to release it) I became rabid. Not only did they play a heart-wrenching set, they were very, very excited to be there and thanked us a million times. I took videos of both new songs which will show up on the new 12" co-released by the band's new label "She", Dog Knights Products and yours truly. The song below is titled "Dust" and it's amazing.

JOLIETTE
Ahahahaha, this was just funny. Like, stupid funny. Like every drummer in attendance was either shaking their head, holding their forehead, picking their jaw off the floor or laughing hysterically. They blew everyone away, stole the weekend, and were incredibly kind, wonderful people, to boot. Unfortunately these beautiful people who travelled all the way from Mexico subsequently had their visas banned from the Un-United States for the next five years. A friend crowdfunded donations, the band had a benefit show back in Vancouver, and finally made it home. They will be releasing a new album in early July. It's absolutely phenomenal and they've already released two songs from it via music videos. I highly recommend checking out the video below which is "Lázaro" followed by "Pudre Infante", tracks 9 and 10 from the 'Luz Devora'. I even made 40 "FUCK BORDERS" versions that are available in the ZBR store as of this moment, with nearly all of the proceeds going back to JOLIETTE. 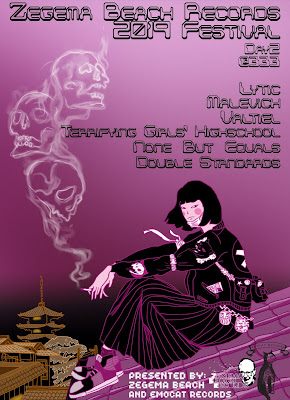 currently unnamed project
After over a year and a half of show inactivity I was able to play in the opening band (currently unnamed) so thank science for that. We had a few practices, but never with all of the members present so this was technically our first full band practice. Some improv, some fast bits, some chill bits and four people screaming in your face. That's pretty much it.
Link to song: *1*

LA SONORA CLANDESTINA
I knew Paolo from a Seattle visit from last year and we hit it off very well, so when they asked to play it was a no-brainer. I managed to capture their full set, which just happened to be a collaboration set with Joliette drummer Azael, and it was fucking mesmerizing. Ambient/drone music with exceptional drumming.

DOUBLE STANDARDS
I've been jamming DOUBLE STANDARDS hard for almost a year now, and their live show did not disappoint. I thought they had expanded to a four-piece at all shows, but I was mistaken as the bassist and drummer blew through songs, both recorded and unrecorded. Henrietta from Terrifying Girls' High School and Diva Plavalaguna lent their lungs to a song, but unfortunately I missed taking a video of my favourite tune "Emperors of the New Millennium" as they opened with it whilst I was working at the door. I was talking to Matt (bass/vocals) and it sounds like they'll release their lost EP at some time in the future, as they are likely to record in the next little while.
Link to songs: *2* / *3*
Bandcamp
Facebook


NONE BUT EQUALS
Without a doubt the most "punk" band at the fest, this happened due to the fact that Steve Roche (Off Minor, Saetia, Yo Man Go, etc.) is the drummer. They put on a great set that had me bruised on tops of my legs due to all that drummin' I was doin'. If you like your melodic punk/hardcore then I highly recommend this Philly band.
Link to song: *2*
Bandcamp
Facebook


VALTIEL
This band had some serious shit luck coming in, as the vocalist contracted laryngitis right before the show and they had a few equipment mishaps, but goddamn they still killed it. They have a sick Italian screamo meets U.S. emo/metalcore thing going where they never actually stick to any one of those, making their chaotic/screamy hardcore very original sounding. Oooo I also released their debut cassette EP 'Human Error' which they've already sold out of. Nab some copies below.
Link to song: "...And Then There Was No One Left, Not Even I"
Bandcamp
Facebook
order cassette


MALEVICH
I knew Atlanta's MALEVICH was heavy, but I was not prepared for what happened. Simply put, they destroyed me. I cackled a few times in disbelief and raised my hands to the sky on at least two occasions. It was truly an experience. They played a bunch of material from their upcoming LP (which ZBR will have some tapes of) and were super chill, as I hung out with them for most of Sunday afternoon at Stanley Park in Vancouver.
Link to song: *1*
Bandcamp
Facebook


LYTIC
Playing last, the two-piece shattered expectations despite the late time (1:30, I think?). As they were unable to make it to Europe for Miss The Stars this made the entire set extra special. Playing eight songs, including two new ones, their 15-ish minute set was packed full of energy and technical, screamy hardcore in the Italian screamo vein, but with some singing now and again. Pick up their split 7" with Shizune below and nab that screenprinted 'one-sided EP' when it comes out.
Link to songs: "Open Letter" / *2 songs* / "Lugenpresse"
Bandcamp
Facebook
order split 7" w/Shizune 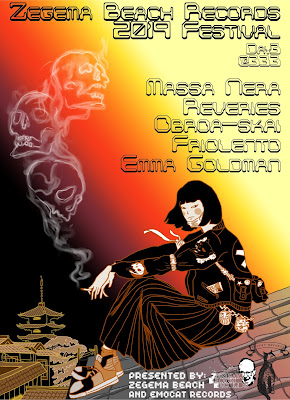 MIRIAM
Okay, so MIRIAM replaced Frail Body and I knew they were mostly Massa Nera members (actually, it's everyone except Chris), therefore I was expecting some good shit. This wasn't good shit, this shit was amazing. Honestly the three-piece slayed a 10-minute set, playing a few new tunes, one of which my camera ran out of battery for. Seriously, I am hella on board with MIRIAM. Like Massa Nera but powerviolence/metalcore.
Link to song: *1*
Bandcamp
Facebook

FRIOLENTO
I had never seen'em but holy moly they have a presence and play some killer screamy post-hardcore. The noise/ambiance/spoken word weaved in and out of heavy screamo/post-hardcore was recently released in March, but the band played a few new songs, one of which (embedded below) is fantastic.
Link to song: *1*
Bandcamp
Facebook

EMMA GOLDMAN
There was no surprise when the other locals fucking brought it, as I've seen EMMA GOLDMAN about five times in the past year and they never disappoint. Playing a mix of old songs, a new split song as well as two unrecorded jams, I can say that I'll be helping release one of those and it sounds aaaaammmmmaaaaazing. If you're not watching out for this band then your peripheral vision sucks ass.
Link to songs: *2* / *3*
Bandcamp
Facebook

OBROA-SKAI
This three-piece from Edmonton are phenomenal. Creating a noisy, dark and feedback soaked hardcore, the band killed it, riding the mindboggling drums of Durell Smith. Not only were they amazing, but earlier in the day we hung out and talked politics, local scene etc. and even voted on if Canadian bands such as Age Of Electric, Our Lady Peace and Moist held up to today. Great music. Great people.
Link to songs: *1* / *2* / *3* / *4*
Bandcamp
Facebook


REVERIES
Boston's REVERIES, the Ancient Injury/Emocat Records band play a very unique concoction of emo, screamo, rock and melodic hardcore. They share members with Lessener who played ZBR Fest in 2017, thus building the bridge that led to this set. They recently released a split with Okant and Chalk Hands which is spectacular. As I was doing door I had a friend record a video. Thanks, Victor!
Bandcamp
Facebook


MASSA NERA
The only band to play both Zegema Beach Records Fests is MASSA NERA, and that makes my heart tingle with joy. Everyone had been waiting eagerly the entire weekend to catch a glimpse of this heavily influential screamo band, and they did not disappoint. Mark said some very nice words about the relationship between ZBR and MASSA NERA before tearing through a 25-minute set that left everyone speechless and satisfied. The new and dare-I-say final iteration of the band is just perfect, and meeting bassist Aaron was super cool. I filmed their full set so check it out!
Bandcamp
Facebook
order split 4-way 12" 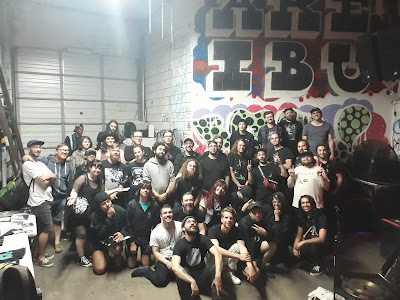