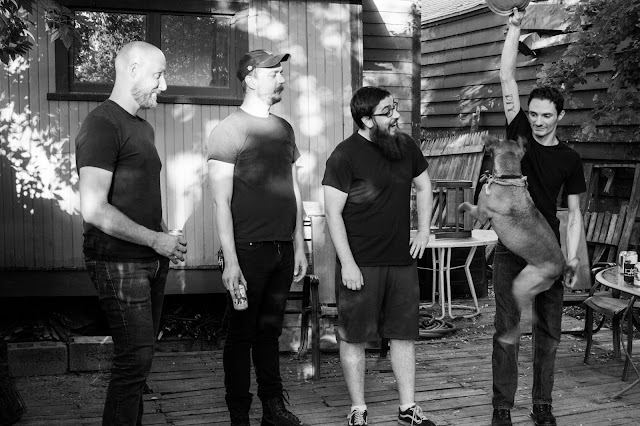 PACK SOUNDS has been jamming in Kalamazoo, Michigan since 2014 when a bunch of members of other awesome bands got together and decided to slow things down and focus on singing. After four years of writing they unveiled their debut full length earlier in 2018 and it's a wonderful piece of work. Essentially I think PACK SOUNDS songs fall into one of two categories, some are playful and a bit silly and others are fleshed out and serious. Playful jams include 2, 3, 6 and 7 while serious tracks are 1, 4, 5, 8, 9, 10 and 11.

On 'Bold Statements', the huge, 7+ minute opener "902 Nights" rolls into a two-minute playful punk tune about drinking "Circling". "To Your Health" has a strong resemblance the The Weakerthans and even brushes up against some country-sounding stuff. You've got your super chills on "Equal Signs" or the epic and amazing "Falls Risk". The latter is about Andrew's heart surgery that was performed back in early 2016 and without a doubt the highlight of the record for me. If you know Andrew you know he likes beer, so there's more than one song about alcohol on here and it's the very honest "I'm Never Drinking Again". "Game Over, Man" is just 1:37 and pays homage to my favourite movie of all time, Aliens, all whilst sounding like Attack In Black on speed. "The Long Ride Home" is another lengthy number, this one is a bit more like Locktender-lite than anything, and soars in very epic fashion with a sick bass riff that leads over the three-minute mark. "Glued" features Andrew's awesome daughter Averie (I met her, and she's definitely awesome) and closer "Libations" shows the band at their most somber and peaceful.

It seems that this band is going pretty hard right now and I wouldn't be surprised if we see stuff from them before Locktender.