I remember watching a video of 5000 a few years back and being blown away but was unable to purchase their online stuff at the time, so I essentially forgot about them. Fast forward to 2018 when my friend Gabriel from Careless posted about his new band that was formed in Japan called Komusō which I instantly fell in love with and subsequently released on both tape and vinyl formats. He let me know that members of Komusō were also in 5000 and CAPE LIGHT, and so I was finally reminded to check those bands out again. Upon hearing CAPE LIGHT, in particular, I was flabbergasted. Beyond that, I pretty much instantly asked the band to release their discography on tape as nothing was available over here and the 2019 'Cape Light' EP was never released physically, from what I can tell. Each track is titled as the Japanese word but using English phonics to spell it out, which I think is pretty neato.

The band's first effort is titled '3 Songs' and was initially released on cdr. It's an incredible debut that I really wish I'd unearthed back when it was released in 2016. It's a very apt introduction to the band, as in these three songs they touch on everything that makes them great both on this release and their following two. The first track, like their split release, is short and devastating as "senbou" absolutly explodes at the end and includes some righteously destroyed vocals. The second track, again like their split release, is a bit more tame than the opener as "sei-shinka" has a strong Loma Prieta. "mushisareru" is bursting with ridiculousness, as there are like six parts in this song alone that are worth mentioning, but I'll limit myself to that unreal ending that kicks in at 1:35. Ya got dual vocals screaming constantly amidst a mesmerizing guitar lead all inside a stop/start breakdown that literally gets me air guitarin' every time I hear it, regardless of where I am. Good golly that's like the ultimate screamo candy.

I was pretty floored after hearing that initial EP, so I quickly jammed the '5000 split' cassette, and I was definitely not disappointed. Opner "chigai" is blown-out and destroyed, showing a noticeable increase in ferocity and power, as after 1:08 you'll need a breath of air. It was upon hearing "yowatari" that I shat myself officially. This thing toys with you at first with a low volume intro that might trick you into turning up the volume, but at 8 seconds in the band purple murples the volume nobs and may very well blow you speakers as well as your eardrums. At 39 seconds the song shifts into annihilation-mode and scorches the listener with unrelenting blasts of hardcore/noise that lead into a jangly transition. This transition awkwardly sets the stage for an absolute beast of a second half, as the "dun dun, da-na-na" breakdown at 1:04 and bass explosions continue to bring my hands to head in utter amazement. Closer "mukishitsu" breaks three-and-a-half minutes, but it annihilates for the first 50 seconds with zero disregard for your safety. After that it's a mish-mash of pieces that are sewn together to make a wonderfully punishing and engaging listen, not unlike every song that the band ever released.

In 2018 the band released a self titled digital EP containing four new tracks called, quite obviously, 'Cape Light'. Opener "kotaewohitsuyoutosurusekainiikiru" wastes no time letting you know that the band hasn't chilled out in the slightest, as in 1:17 they lay waste in a manner likely inspired by Loma Prieta's 'IV' material. Those drums, transitions and shifts are mindboggling. "machigaeteirunohaitsumobokuda" is nearly double in length and relies on thick, raw screaming that is definitely matches the intensity and amazingness of the instrumentals. The section that begins after 1:00 is both deafening and dancey, a combination that I was unaware existed, and that ending'll put you into a coma. "tooihiwakasundeikizanzoudakeganokoru" is ridiculously fast, and the throat-wrenching screams somehow match the drums. The guitar climbs at 1:14 are pretty sick, and the slowdown right before the two-minute mark is fantastic, with each instrument taking a subdued role and the vocals morphing into a yell. The climax right before the third minute is sensational and so fast you should prepare yourself cuz you might miss it. The final track "nanimokaesukotonodekinaibokuwowaraudarouka" is very bass heavy and includes an uncommon intro to the song that builds for nearly 35 seconds before rupturing intense screamo that washes over the listener in waves until the all-too early conclusion at 2:19. 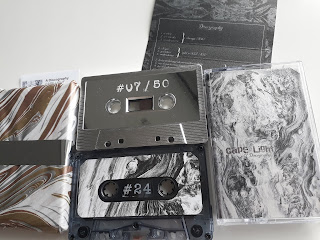 Seriously, track for track this is one of the best discographies I have ever had the pleasure of hearing, and I am beyond stoked to be releasing it on tape. The 50 cassettes are available as of today on Zegema Beach Records, with 40 coming on smokey grey tapes with 2-sided sparkle j-cards. The remaining 10 are on sexy platinum silver and come with the same j-card but are wrapped in printed tissue and sealed with silver foil tape. Each come with a download code but you can donate/download this essential discography at the Zegema Beach bandcamp page linked here. The buy links are below in the discography section.

Buy 'A Discography' in the U.S.A. here