I became aware of SERPENT COLUMN after my friend Maya told me to check them out. It took me a bit to figure out how to receive the band's musical input, as this shit is abrasive, jarring and straight-up nightmare-ish. Each album by the band is quite different, but will still knock you off your feet all the same.

Their first venture was 'Ornuthi Thalassa' in 2017. The first three songs are each under six minutes, while the last three are each over six, and it's in the latter half that I find myself most invested in their debut. Don't get me wrong, "Biogony 2" kicks my ass, but "Feldweg" and "Feuersäule" are the real winners here, both of which near the 10-minute mark and deploy more atmosphere amidst the chaos, revealing a much more epic and posty side of the band that we see emerge more on their 2019 LP. Here the Noise Trail Immersion-on-speed approach works well, but it's their later material I crave, as these recordings are more about pummeling the listener and vomit-driven, deeper black-metal vocals.

'Invicta' is a very different beast, as it has only three tracks that clock in at 14:14, 7:19 and 9:01, making it a a pretty long listen, but the songs include many more shifts and manage to slow themselves down to near-nothingness at times. The balance is much more of my taste making it more of an instrumental, atmospheric, post-hardcore and black-metal concoction, but the vocals are rarely present on this release. For example, the demonic shrieks don't show up for nearly seven minutes on the opener "Asphodel" but holy shit they blow the gutteral vocals from the debut out of the water. "Decursio" is my go-to on this album, being the shortest of the three and the most comparable to the following year's groundbreaking LP, as it features a bunch of changes, shrieky vocals and enough melody to coagulate the chaos into something comprehensible. 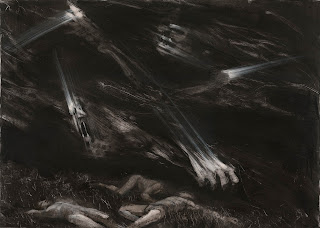 It was 2019's 'Mirror in Darkness' that I heard first. I almost stopped jamming this after three tracks as it seemed like a cacophony of noise, but I soldiered on through the apocalypse and got myself to five seconds into track four's "Apophenia" my ears perked up and I fell in love. This song has a wonderful, very quick, plucked, guitar progression that leads in and out of the towering black-metal/screamo hybrid with definite nods to grind, and it's fucking sick. At 1:57 the instrumental "Detainment" is a very sick song that employs more intricacy that exists simultaneously with one helluva groove, and also includes a lovely start/stop that precedes the minute mark. It shimmers. It sways. It heaves. But it's the title track "Mirror in Darkness" that is the champion of the band's current discography. Holyyyyyyyy fuck. This is the perfect mixture of ferocious screaming, super crunchy guitars, lightning drumming, breakdowns with a hint of melody. The turnaround/double-time section that hits at 1:03 is otherworldly and helps define this album as an extremely volatile but beautiful piece of art. It would be uncouth of me to not mention "Warlords of the World to Come" for it is sinister personified, with a whirlwind first section, a wonderfully engaging and instrumental midsection followed by a gargantuan close. Goddamn, what an album.

2020's 'Endless Detainment' came out after I already had this set to review, so I haven't jammed it as much as its predecessor. What I know for sure is that the album is way shorter (on discogs.com you'll find 'Invicta' and 'Endless Detainment' are classed as "mini-albums") and relinquishes its hold on melody, opting for blazing speed, short songs and utter annihilation. To be honest it's the interplay of repetition and groove with the band's chaos that really grabs me, and this release is so unrelenting I generally just get barreled over and crushed before I know what's going on, as most songs barely make it to two minutes. Opener "Pantheoclasm" has some seriously punishing bass until the drums whip everything up into a fine paste, "Manure in Pearls" has an awesome title and perhaps goes the hardest, while title track "Endless Detainment" retains the most sense of melody from the previous LP, albeit with a bunch of vocalists. So if you're looking for a challenging and extreme album for 2020 I'd check this the fuck out right now.