It feels weird to start this review with "SUIS LA LUNE was a band", as the band seems to have
carved a place for Sweden in the screamo scene much like Refused did for hardcore and the evolution of that genre. Their early 2005 demo sounds like Raein and La Quiete, so does the comp track "As Concrete Replaces Hope" that appeared on the legendary 'The Emo Apocalypse' 12". From the 'Demo', both "The Feeling I Get When You Place Your Eye On Me" and "Dance Red River, Dance!" are hella La Quiete, and by far the screamiest, speedy and volatile stuff that the band recorded. Things started to slow down on the first self-titled 'Suis La Lune' 7", although the songs still retain passionate screaming, aggressive sections and nods to the two aforementioned Italian gods.

It was 2006's 'Quiet, Pull the Strings!' that was my very first SUIS LA LUNE purchase, which I nabbed on cd over a decade ago. It is a pretty somber affair, which really expands from their previous 7" and lays the foundation for their future material. There's also a lot of spoken word on this record, and although it's not a band trademark is definitely utilized more often from this LP onward. After an instrumental opener, "Utter Lisence is Fragile" hits with screamo that mixes Catena Collapse and Belle Epoque with shoegaze elements, although at 1:30 shit gets pretty abrasive to the intensity of La Quiete, making the second half much more up my alley than the first. The next two tracks blaze through quite quickly in fine European screamo fashion, followed by the title track. "Fingers, Voice, Heart, Shake, Shake, Shake, Shake" is awesome and one would think a likely influence on my Swedish sweethearts Via Fondo. "A Letter - A Void" fires off some sweet, spacey lazerbeams disguised as guitars while closer "My Mind is a Birdcage" is a swelling, epic, exhausting, seven-minute journey through a beautiful and tranquil wilderness (not unlike most of Trachimbrod's material).

I don't know what the fuck Henning and gang did in 2007, but with their 2008 'Heir' EP they pull out some seriously technical and incredibly catchy instrumental jams which certainly helped catapult them into the hall of screamo forever. Opener "With Wings Of Feathers And Glue" boasts a killer riff with dual vocals and has the perfect mix of melodic slowdowns and cathartic intensity. "September Gave Us Awkwardness, October Gave Us Nothing" is much heavier, faster and screamier but mostly abstains from the spacey, twinkly guitars...at least for the first half. There are seriously an incredible amount of similarities with these awesome Swedish screamo noodles by SUIS LA LUNE and their contemporaries Via Fondo (even faster and more chaotic) and Trachimbrod (similar but perhaps even a tad softer), both of which you'd be silly not to immerse yourself in have you any love for this band. "The Greatest Actors Keep On Acting Offstage" continues with the long titles, as well as the engrossing guitar wizardry while closer "Can't Believe I Spelled It Out To You" matches the opening track in the way that it seamlessly blends the melodic with the chaotic. They also released a great song on the 'Har du hört den förut? 29 svenska artister tolkar Förmögenhet' compilation titled "Förmögenhet" (aka "Fortune") which is easily one of my favourite SUIS LA LUNE tunes. It begins in lightspeed fashion before slowing down slightly and incorporating multiple people screaming...I love it. 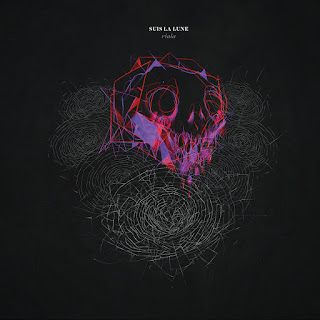 It was another four years until another proper EP or LP came from SUIS LA LUNE, but they did release a split 7" in 2009, a two-song tour 7" and stuck a song on a compilation. The 'Osceola split' houses "Friends", a distorted and dreamy concoction that is as screamo as any SUIS LA LUNE song could be. I am unsure if the band was listening to The Strokes, but this is about where I swear that a lot of SUIS LA LUNE solos are influenced by the American rock band, as they follow a very similar structure and sound but are sped up to twice the speed. This is definitely not a knock as I really like The Strokes and their guitar solos which are candy for the ears. The two songs on the 'US Tour 2010' 7" are much softer, giving us a glimpse into what Sore Eyelids was going to sound like, but it definitely retains the band's sound, they just kinda jump back and forth without ever quite reaching the fury of the previous five years. "BTW That Untitled Song on Your Mixtape was for You, I Wrote it When I Missed You" in particular has more clean singing than any previous material. Their compilation track can be found on the spectacular 'Vi Är Alla Släkt' tape and is an instrumental song titled "So Much for Keeping It a Secret".

Then in 2012 came 'Riala'...and holy shit, the screamo world went nuts. Understandably so. This album speaks volumes of the talent the band possess as well as their obvious myriad of influences coming together under a gorgeous but jarring umbrella of Swedish screamo. You'll find your screamo jams like opener "Cornea", shoegaze elements in "Stop Motion", sections of post-rock and post-hardcore in "Wishes & Hopes" and sad/pathetic vocal delivery on "Remorse" - although every song is great. But it is with tunes such as "Hands are for Helping" (that's one hell of a solo...and it goes on for almost the entire song), "In Confidence" (a web of angelic post-hardcore/shoegaze), "Sense In a Broken Dialogue" (very mature/mesmerizing) and "One and All, Every Bit" (the epic closer) that the band propel themselves from great to legendary.

SUIS LA LUNE wasn't heard from again until 2015 when they released 'Distance/Closure', likely due to the fact that Henning was working on a lot of Sore Eyelids material. The opener "Different Perspectives" is a slow build to it's nearly seven-minute close, but once it hits...man, it fuckin' hits. "Endless Cycle" swirls around in screamo lullaby land, "Better Parts" is faster paced but still pretty and closer "Within" is dreamy, vast and 11:37 in length, making this release more in line with a full lengths run time of nearly half an hour.

SUIS LA LUNE's final recordings are on the 2016 'Shirokuma split' 12"LP with that Dog Knights released with some fantastic die-cut packaging and colour variants. The four songs here are an excellent collection of farewell gems, including "What these hands can't hold" (holy guitar interplay after the three-minute mark), "Beyond repair" (twinkle city), "In between heartbeats" (your standard, epic and lengthy SUIS LA LUNE track) and closer "Lost moments" (shortest but softest).

To reiterate, it's fucking weird to think that SUIS LA LUNE is done, but good golly they left a fair amount of material spanning more than a decade so let's be happy about that.