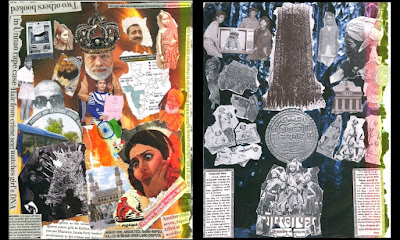 We are extremely stoked to bring you "Flesh" by Pune, India's 5-piece emo-violence/neo-crust band FALSE FLAG. The song will appear on the split cassette release with Neck Deep In Filth via Callous Records in the U.K. on September 3rd, 2018. Their split counterparts Neck Deep In Filth are from Kathmandu, Nepal and feature members of Jugaa and Squirt Guns. FALSE FLAG contributes four tracks, all mastered by Will Killinsgworth. I have been told that the songs were envisioned as Orchid playing Neil Perry jams, and holy shit you can actually hear it! They are also influenced by Tristan Tzara, Ampere, Louise Cyphre and Letters To Catalonia, but I definitely hear a dark Japanese hardcore vibe pulsating through as well.

Guitarist/vocalist/friend Shaunak Phadnis (who also discusses screamo and his band in this podcast on Haramcore) had this to say about their side of the Neck Deep In Filth split:

"This record is about the Body seen through the lens of media, politics, Surveillance and Power. It asks questions and urges you to ask them as well. This record builds on the
themes we established on our first EP."

"Flesh" is the most diverse track on the record, finding a delicate balance of pummeling, chill and then pummeling again, all across four minutes of punk, hardcore, screamo and metal. Literally only two seconds in you will be thrown backward by the aggression, power and anger, with seething dual vocals destroying the opening from 20 to 40 seconds. The midsection is very ambient, eerie and pretty gosh darn June Paik! Seriously the atmospheric meandering here is lush and very engaging for such a slow, simplistic part, and it leads the song up the mountain in order to gather speed for its attack from 2:10 onward, complete with octave riffing, ear splitting screams and gang vocals.
Posted by Dave Norman at 10:09