I was sent STREGA MORTA by Aaron Broveak, as it is his solo screamo project that was recorded in January of 2019, releasing 'Demo' the following month. Who's Aaron Broveak? Well holy shit, he played in Back When, Caught In The Fall, Eyes Of Verotika, and if none of those names ring a bell you got some mad homework, my friend. 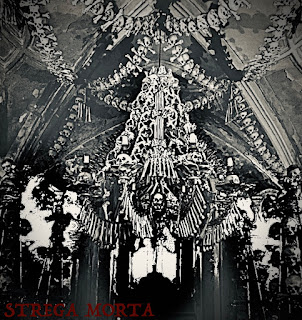 'Demo' houses four songs, all of which focus a combination of raw hardcore, screamo and the occasional death growl. It opens with "Blossom", a callback to the Caught In The Fall days of Omaha screamo. The rhythmic shifts and dual vocals are awesome, with a very sick groove transition just before half-way through and pretty aggressive subsequent behaviour. "Hedge Apple" is next and my pick for strongest track, as it lays on some seriously driving, cathartic and explosive screamo following its one-minute ambient intro. "Levitation / / Mediation" is by far the most somber of the lot at 2:04 of distant, discordant, ambient and experimental screamo that leads nicely into closer "Preghiera Delle Streghe". At 1:22 this thing is a fucking beast, complete with some massive drums, ridiculous timing and a shit-ton of back-and-forth screaming/growling, making it the most chaotic and least accessible song here...so it's one of the best!

We'll see what's in store for Aaron later this year, as I'm hoping he'll have time to write a follow-up during the quarantine. Fantastic demo.