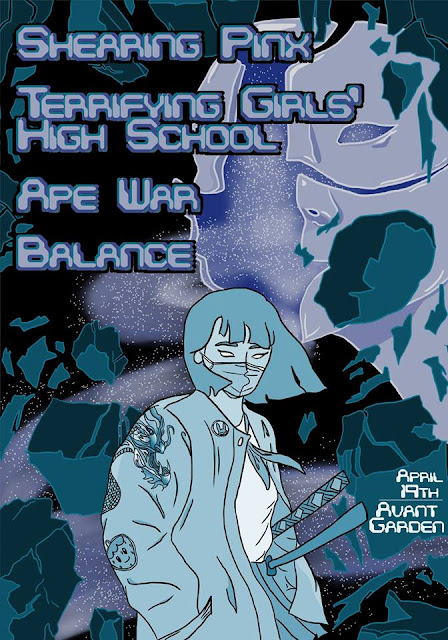 BALANCE
Opener BALANCE were super nice and were the first to introduce themselves to me upon entering. About two songs into their set I went from thinking, "this is pretty good," to "oooo damn I am diggin' hard!" The closest comparison I had was Kowloon Walled City, as their dark, abrasive hardcore utilizes progression and expansion within a generally confined genre. These two videos don't do them justice, as the subsequent two songs were even better than the videos I've posted.

APE WAR
Holy fuck. This was what I said to myself and everyone else I saw that night about APE WAR. I don't think many there had seen this hardcore/grind/powerviolence/thrash/metal mutation before but people started shitting themselves once those vocals hit. Absolutely ravenous shrieking took the cake for me, but the dual-guitar attack was on-point and the bass and drums were tight-as-fuck. They had fantastic energy and my favourite moment of the night came when one of the guitarists nuzzled his head into the vocalist during a song. It was a very tender moment amidst a very violent and intense set. You will be seeing more of this band on the blog soon. Do yourself a favor and be sure to make it to at least 2:25 in the embedded video below...good lord almighty.

It was their release show, and they brought it. Any other way would have been a letdown and this entire show was anything but. Henrietta strutted around squawkin' and screamin', Matt danced around with the bass, Miggy let loose some ear-shattering shrieks whilst guitarin' it and the drummer Matt lost every stick possible and looked like he was having a helluva time. Their new album 'Spooky Girls' Gymnasium' was released but two days ago to much acclaim (OMSB, Sophie's Floorboard, Idioteq and Bandcamp) so ya best get on it.


SHEARING PINX
I was aware of a few other projects by members of SHEARING PINX, but hadn't heard or seen this band yet. They were excellent and played a mishmash of rock, post-punk, noise and post-hardcore that were a perfect end to the night, especially their instru-metal jam that reminded me of Pelican and the embedded semi-improvised closer below with a rather terrifying climax. I get a bit of a Sonic Youth vibe but this is most certainly out of my comfort zone when it comes to accurate comparisons. It turns out the drummer is from Nanaimo so hopefully I can meet up with them soon and break into Nanaimo...as taking a 2-hour ferry each way for shows is expensive and time-consuming...but goddamn I love it.